Tuesday night - in Colorado - Dodgers shortstop Dee Gordon launched his first-career home run. And it was a long one! By Dee Gordon!

Share All sharing options for: Dee Gordon's Proof Of Concept

The Los Angeles Dodgers have a number of very uninteresting baseball players. They are at least partially offset by a small handful of very interesting baseball players. Clayton Kershaw is as good as you think he is, plus 30 percent. Matt Kemp is apparently trying to find out what it would be like to be a likable Barry Bonds. Andre Ethier is around and he's all right. And, of course, there's the diminutive Dee Gordon.

You've probably heard a lot about Dee Gordon since at least the beginning of spring training, because I've heard a lot about him since the beginning of spring training and I assume you read many of the same people. Gordon can run like the dickens. He can also field like the dickens, if "like the dickens" means "really well". He makes contact with pitched baseballs. He has a fun-loving personality. Gordon's an exciting guy. An exciting and very little guy.

What Gordon ain't is a power hitter. That shouldn't take you by surprise - he's officially listed by the Dodgers at 160 pounds, which means he probably weighs between 140-150 pounds. He's a contact-first slap-hitter, and that's the style he's made work as a professional. Last year with triple-A Albuquerque, he hit zero home runs. He hit ten doubles and six triples, but zero home runs, over more than 300 trips to the plate. As a team, Albuquerque slugged .469. A few years ago, with Albuquerque, Dallas McPherson clubbed 42 dingers. Actually, that's a bad example because Dallas McPherson is strong, but Albuquerque is a hitter's paradise. It's one of the best hitting environments in professional baseball. As a member of that team, Dee Gordon hit zero home runs.

To put it another way, here's Dee Gordon's spray chart as a major leaguer from his debut through Monday, courtesy of Texas Leaguers:

This spray chart shows where balls are fielded, and not where they land, so for example, that green box in deep right-center? I'm going to guess that was a gapper that wasn't picked up until it got to the track. I'm going to guess it didn't get to the track on the fly. I could try to confirm by going to the video, but I'm feeling pretty confident.

Here's an excerpt from a Dee Gordon scouting report from before the season:

There's a reason that spray chart up there goes through Monday, though. Tuesday, Gordon was in the Dodgers' lineup for a game in Colorado. In the top of the first inning, Gordon batted against Jhoulys Chacin. The count went to 2-and-1 when Chacin threw a fastball. Gordon swung at it. 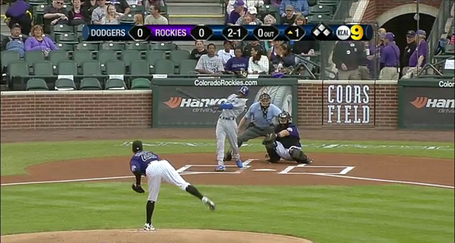 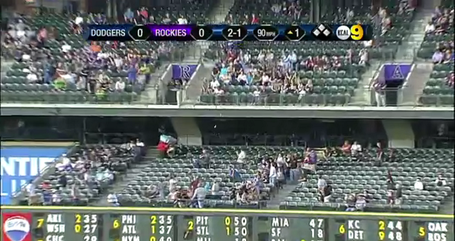 Your first response might be "holy crap!" Your second response might be "...but Colorado." Perfectly valid, because Colorado famously plays at elevation. But thankfully we have the Home Run Tracker as a resource. Gordon's home run has a calculated distance of 419 feet. Accounting for wind and altitude, it has a calculated "standard" distance of 410 feet.

The average home run hit so far this season has a calculated distance of just under 400 feet. So given that context, Gordon's home run was very much legitimate. So your third response might cycle back to your first response: "holy crap!" It's not just you. The Dodgers' announcer as it was happening:

Socked - deep to right, this one iissss ... WOWWW! Big-time gone! Almost an upper-decker for Dee Gordon! 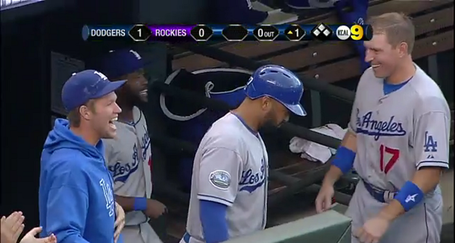 Players in dugouts find pranks funny, they find terrible slides funny, and they find home runs by non-home-run-hitting hitters funny. Gordon busted up when he returned to the dugout, too. He knew how weird it was that he did what he did.

Dee Gordon entered Tuesday with zero home runs above double-A. Now he's got one of 'em, and it wasn't cheap. He did hit two homers in double-A. He hit five combined homers at lower levels. I don't know if all seven of those homers were inside-the-parkers, but I'm guessing at least one of them flew out. So Gordon has actually shown before that he's capable of hitting a dinger.

And now he's shown it at the highest level. No longer will people wonder if Dee Gordon will ever hit a home run. They'll wonder if he'll ever hit another one, but now Gordon's removed himself from the company of guys like Ben Revere and Reggie Willits. Dee Gordon can hit a major-league home run. He proved it. Just like Jason Tyner. And who could forget Jason Tyner? These are the memories that last a lifetime, for them, and sometimes for us.

Dee Gordon might never hit another home run over the fence as long as he lives. I honestly can't say. But he won't be shut out, and while he's still being out-homered by Chone Figgins, there will be at least one brief period in Gordon's life that he can say he's out-homering Albert Pujols. These were already fine times to be Dee Gordon. Now they're just a little bit finer.