Sloganalysis: The worst MLB slogans ever, and what it says about your horrible team

Many baseball teams have slogans, and since they're slogans, almost all of them are terrible. Here, we look at the very worst, and we learn what teams should never, ever choose as a slogan.

Share All sharing options for: Sloganalysis: The worst MLB slogans ever, and what it says about your horrible team

Slogans, by and large, are miserable. They exist because their authors, instead of aspiring to ask for a few moments of your attention to intelligently spell out what they're trying to say, instead settle for the 0.04-second blip that you will automatically digest, whether you intended to or not. That's fine if your message is, I don't know ... "Pro Quality. Fan Perspective." It delivers an actual message and it makes sense.

The same cannot be said of most contemporary sports slogans. They're either impossibly vague, like COME TO PLAY or EXPERIENCE IT! or WE WILL, or they completely break the English language by using words how they are not supposed to be used. This process begins with some ad agency saying, "let's use 'win' as an adverb!" and ends with you voluntarily keeping a plastic cup in your kitchen cabinet that says "PLAY HEART WIN GUTS HEART IN THE GAME BLEEP BLOOP HUSTLE SPIRIT PRIDE" all over it. It will somehow outlast every other piece of dishware you own before you eventually retire it and set it on the back porch so that your visiting negligent stepfather can ash out in it.

A slogan says a lot about a baseball team. In fact, the mere presence of a slogan emits reeking fumes of desperation, as teams that do choose to officially adopt slogans have an average winning percentage of about .480. They come in different flavors, too: some imply that the team is going to perform an action, while others claim that it's on the fans to do something. Some desperately exhort their fans to "BELIEVE," while others -- and I am not making this one up -- say, "It's your call."

I gathered a list of 72 different slogans used by Major League Baseball teams over the last 15 years or so -- slogans that fit into one of 12 different "types" I was able to identify. I then looked at the winning percentages of these teams in question, to see whether there was any correlation. 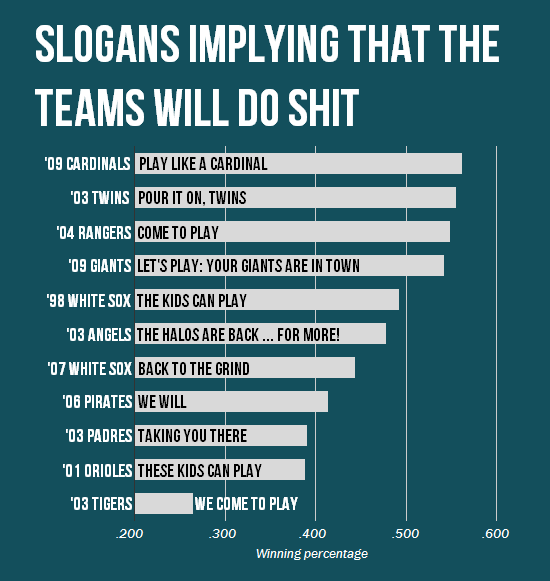 I like this. Baseball teams are products, and it's respectable for an organization to say, "it's up to us for our product would be good. We're going to do something."

Back to the grind.

"Playing baseball is just the worst, but we'll do it just for you."

The Pirates' mother just yelled at them from down the hallway about mowing the lawn.

We come to play.

What do you do when you have to write a slogan for the worst team in the history of the American League? Write something that is technically accurate. Other prospective slogans included "WE ARE A BASEBALL TEAM" and "HI I AM WRITING A SLOGAN." 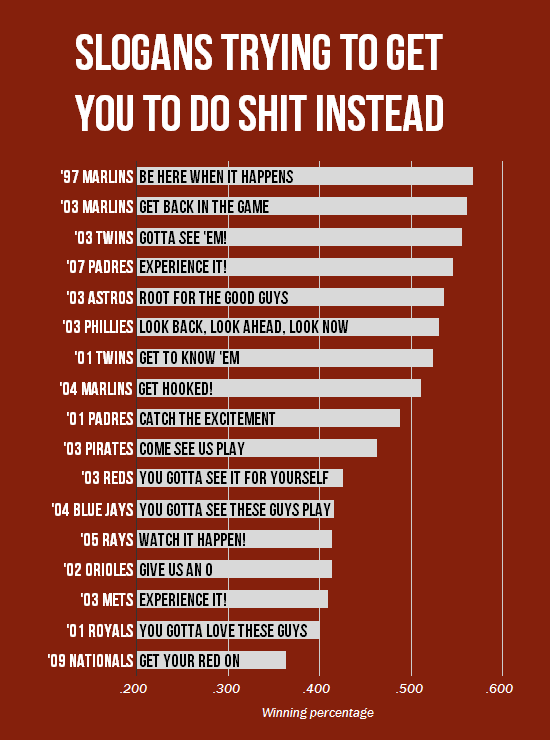 On the other hand, this is pretty clownshoes. I'm the consumer! Why are you trying to get me to do shit? That's your job, slackers. It's like if SB Nation changed its slogan to COME TO OUR WEBSITE YOU IDIOT.

Be here when it happens.

Get back in the game.

Prescient! These were the slogans of the 1997 and 2003 Marlins, respectively, who of course both won the World Series. I'm pretty impressed.

You gotta love these guys.

I don't think I've seen a more unmistakable "hahaha yes we are horrible" gesture from a major pro sports team.

Get your red on.

Did the "Get Your ____ On" cliche construct start with Missy Elliott? This is the same team that's going on about "Ignite Your Natitude" this season, which probably means that everyone in the Nationals' front office should go to prison. 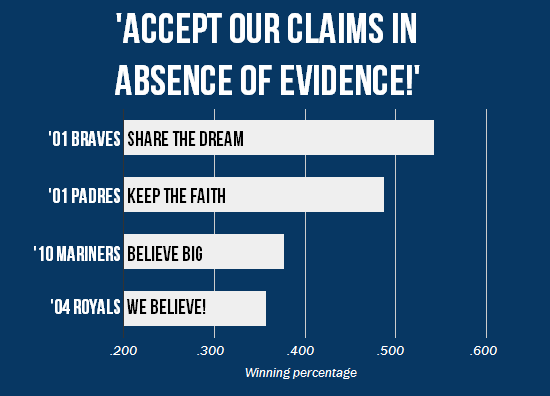 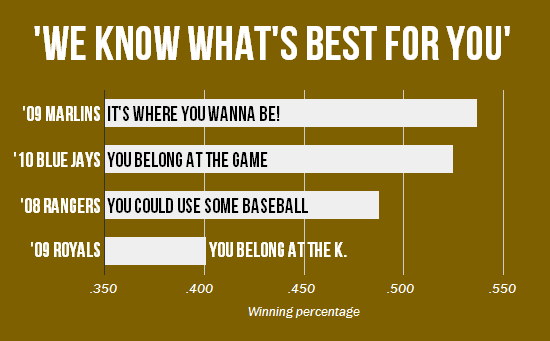 You belong at the K. 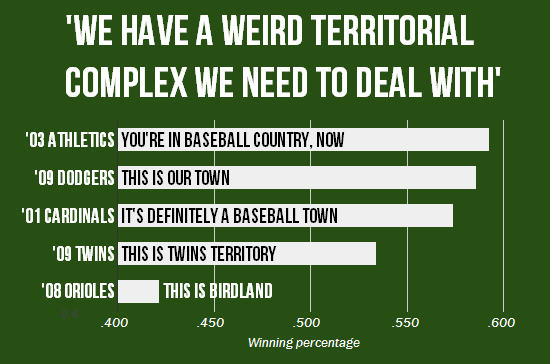 Jeeeez, guys. I mean, I understand why the Orioles, who are pretty close neighbors with the Nationals, are concerned about territory. Same goes for the A's and Dodgers. But Twins? I guarantee you, guys, nobody is going to screw with you. The Blue Jays' stadium is almost definitely not a Starcraft Terran base that is going to lift off, hover, and re-settle in St. Cloud.

This is definitely a baseball town.

"also who are the Rams and what are Super Bowls" 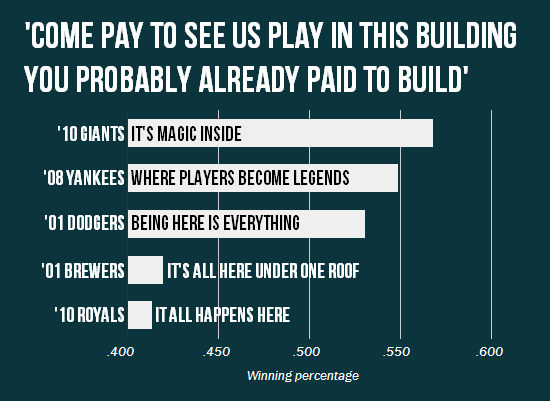 "That's why we're blowing this dump to the ground. The players keep turning into legends and we don't have enough players to finish baseball games."

It's all here under one roof.

"We are an outlet mall. We got some Asics. You want to buy some Asics? Cash only." 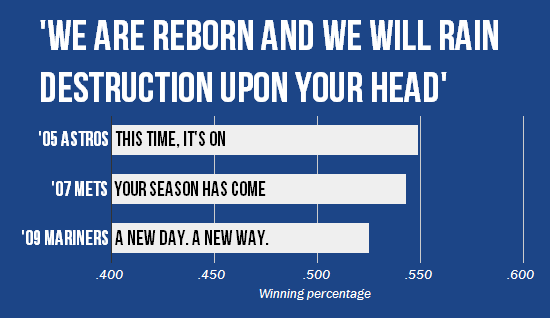 Surprisingly, only three of these 68 slogans expressed out-and-out swagger. Teams are probably afraid of looking stupid in September when they're 65-85 and hawking mugs that read WE'RE GONNA KICK YOUR ASS, which is understandable.

Look at this, though. All three of these teams were pretty good. The 2005 Astros, of course, reached their first World Series in franchise history. And the Mariners improved dramatically, finishing over .500 after losing 101 games the year before. 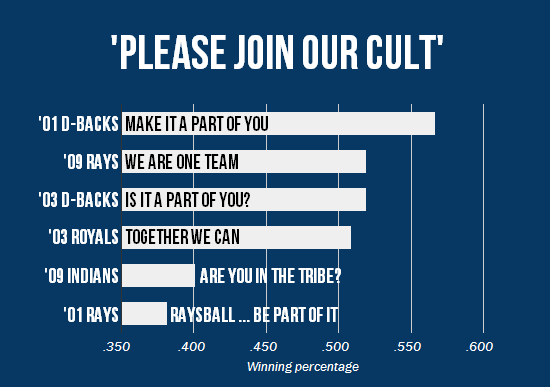 This type is a cousin of "slogans that want their fans to do shit." Basically, these teams want to form a sort of social/ideological collective in which followers unconditionally worship a team that might go like 84-78 if they're lucky.

Make it a part of you.

Is it a part of you?

NO LEAVE ME ALONE 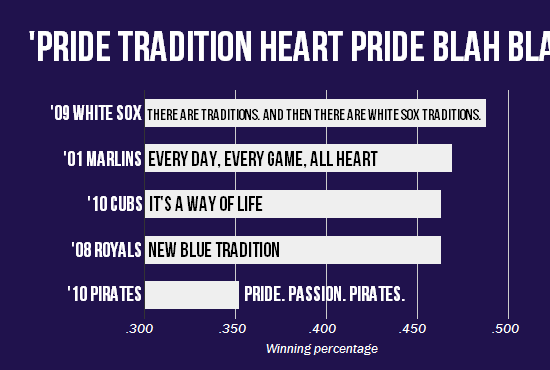 Oh man. Unmistakable trend alert: if a team starts talking about pride or tradition or whatever, RUN IN THE OTHER DIRECTION. 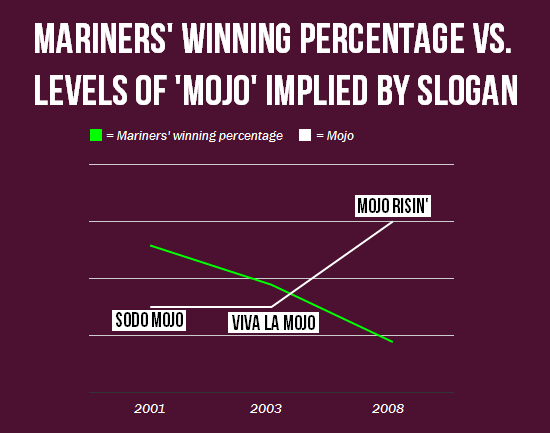 We need to talk about these Mariners slogans. I don't know what they mean by "mojo" or why they are still using slang that fell out of the zeitgeist in like 1998, but it's clear that there's a direct correlation between mojo and losing. Next year's slogan should be, "MITIGATE MOJO." 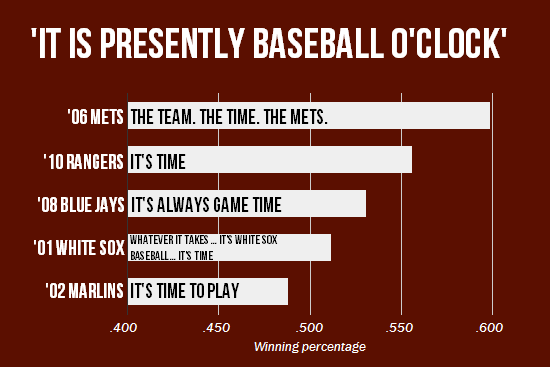 Here's an impressive showing. The 2010 Rangers went to the World Series, the 2006 Mets finally broke the Braves' 14-year stranglehold on the NL East, and the Blue Jays managed a respectable showing in the daunting AL East.

If I ran these teams' promotional departments, I would have given away watches with like five hands on them that just had BASEBALL written everywhere instead of numbers, and wall calendars that listed BASEBALL DAY!!! instead of the date. Just to really hammer it home/be insufferable. 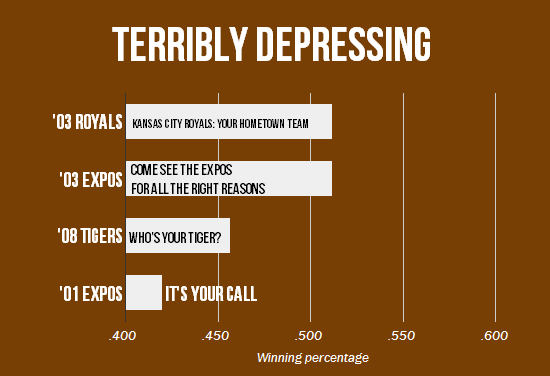 Yes, the Royals had a winning season in 2003. It was also barely a winning season, and their only winning season between 1986 and 2011. That's Reagan to Obama. A guy who isn't old enough to rent a car to a 50-year-old man. This slogan really hits it home: there are no guarantees. The team you're stuck with may, in fact, never be good for as long as you live.

Come see the Expos for all the right reasons.

This, of course, was the second-to-last Expos season. I'm troubled by the insinuation that people could go to Expos games for the wrong reasons. Like, there were 1,500 people in a cavernous, 78,000-seat stadium, and they're up in one of the boxes picking out fans and saying, "they're not here for the right reasons, get them the Hell out of here," and they start throwing garbage at them until there's nobody in the stands but Jeffrey Loria and the legion of rodents that does his bidding.

Here's another example of a baseball team leaning on a phrase that everyone had been tired of for five years. The 2013 Tigers will use a Borat impersonator in their promotional materials. The saddest thing is how not-surprising that would actually be.

It's like they knew. "Come to our games or we're gone in three years. Your call." So depressing and prescient ... depresscient! DEPRESSCIENT! [jumps through second-story window, sprints to patent office]

So, let's take these 11 types and stack them up against one another: 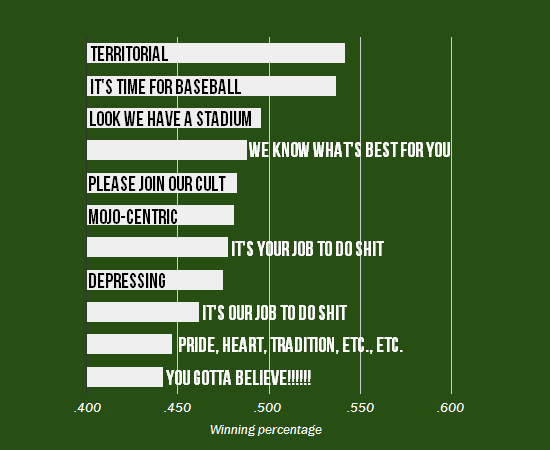 The teams with territory-sensitive and time-oriented slogans clearly do the best. The rest of the largely unimpressive, forgettable rabble of half-thoughts don't really seem to say much one way or another, but again, we have learned three important lessons: