Share All sharing options for: Pacquiao Vs. Bradley Results: Photo Of Official Scorecards

In a result that has shocked the boxing and sporting world, Timothy Bradley was awarded an incredibly controversial decision victory over Manny Pacquiao. We've talked a bit already about the result and a bit about the key takeaways from the fight, but sometimes you just have to see it to believe it.

So here is a photo of the actual official scorecards from the fight: 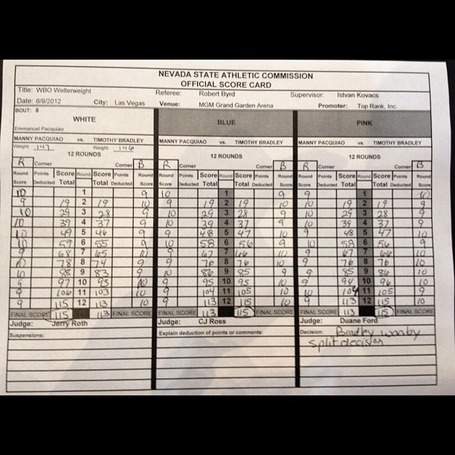 You can see from looking at the cards that there were very few rounds which were scored the same by all three judges. Given that each judge has a different view of the action, that will happen sometimes. But it usually happens in fights that appear much closer, not in fights where one fighter seems to clearly outwork the other.

Keep your browser locked in here as we'll have much more on the fallout of this fight in the coming hours.