The Week In Worst: When Baseball Goes Wrong

Continuing a recurring weekly series, in which we review the worst pitches, swings, and defensive plays in recent baseball action.

Share All sharing options for: The Week In Worst: When Baseball Goes Wrong

Hello there once again, friends. I like to begin by addressing you as friends because it's important to be a good host. I come to you this week with a troubled heart. Last time we did this, I identified as the worst defensive play one that very clearly was not the worst defensive play, as revealed in the comments. Though I selected a play that was very bad, I overlooked a play in which a right fielder effectively threw the ball to himself. That was a grave mistake, and I've felt bad about it ever since.

In an effort to make sure that doesn't happen again, I've revised my methods of looking for bad defensive plays, and now I'm more thorough. Still not perfect - it would be impossible to be perfect - but with luck, we don't end up with another situation like last week's. The very integrity of The Week In Worst is at stake. If there were a The Week In Worst dedicated to unforgivable blogging errors, I would have been crowned a champion. :(

To the .gifs. The baseball considered: Sunday, June 3 through Saturday, June 9. You might wonder why this doesn't go Monday through Sunday, since these posts go live Monday morning. It's because how late do you expect me to stay up for you on a Sunday? Be reasonable.

Location
74.9 inches from center of zone

There's a lot going on in this .gif. There's Romero, throwing the ball straight into the ground, less like he's throwing a pitch, and more like he's throwing a fit. There's Orlando Hudson, turning away from the ball so as not to get hit in a delicate place. The ball then bounces away from him. There's J.P. Arencibia, sliding over to block the pitch and ending up in a worse place than where he started. There's home-plate umpire Jim Joyce, moving over to avoid the ball and instead getting hit in the mask by the ball. And of course, there's the baseball flying out of the frame.

Here's where the ball hit the ground: 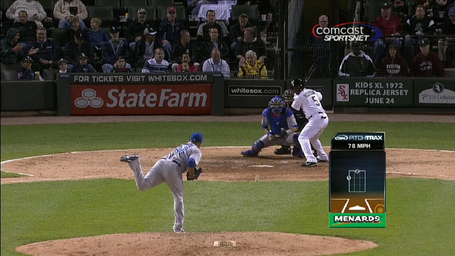 For a better idea of how bad this was, here's another screenshot: 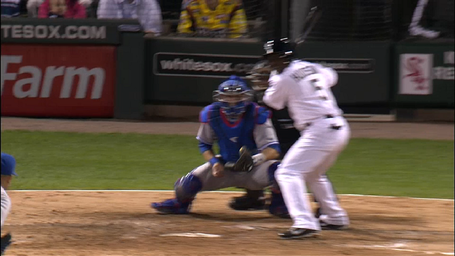 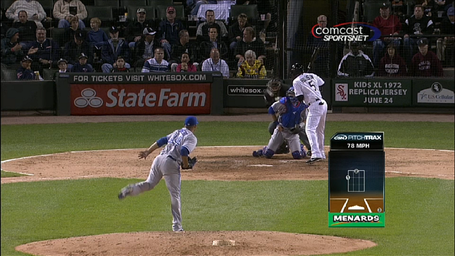 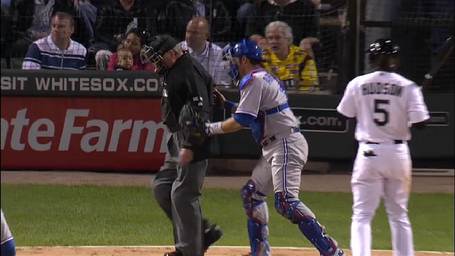 It was such a bad pitch that Arencibia had to comfort the umpire and make sure he was all right.

Said the color guy on the White Sox's broadcast:

Well that was one of the w-... shortest pitches you'll see.

No need to self-censor, color guy. Your instinct was right.

Location
60.4 inches from center of zone

This was actually the third-worst pitch of the week by location, and not the second-worst, but I'm including it because it's basically the opposite of Romero's pitch, and because it was thrown to Kyle Drabek, who is perhaps the wildest pitcher in the entire league. 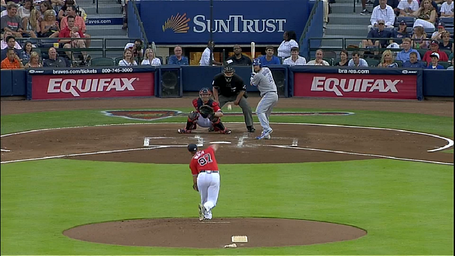 What we see here is the catcher's target, which is presumably also the pitcher's target. It is a perfectly reasonable target, just off the outside edge. 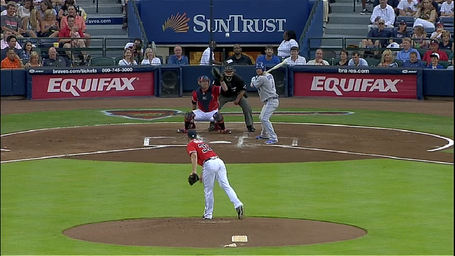 What we see here is where the ball went. Why, that isn't close to the target at all! The ball is over the plate, but about two torso lengths too high. Beachy, understandably, was embarrassed, and trying very hard to make himself disappear from the mound. 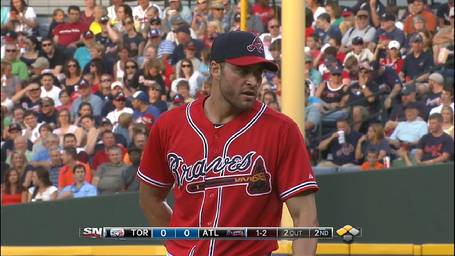 What kills me is how casually Drabek watches the pitch sail to the backstop. "Yep, just another normal pitch," thinks Kyle Drabek. "Nothing really unusual or bad about that pitch at all."

There's an underrated part of this play that only becomes evident upon repeated viewings. The catcher sets a target, then adjusts the target based on the flight of the pitch, and then: 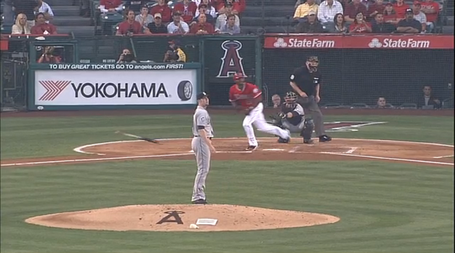 Let's put that in motion, a couple different ways:

In almost all cases, when a pitcher gives up contact like this, the catcher will drop his glove to the ground, with nothing there to catch. Sometimes the catcher will stand up. The Mariners' catcher freezes in place, forlornly reaching out for a pitch that will never arrive. He poses like a statue, a monument to a brave baseball that was in the wrong place at the wrong time. There is, in Kiev, a monument dedicated to the firefighters who died responding to the Chernobyl disaster. For a split second, and then for another, John Jaso was a monument to a baseball killed in action. 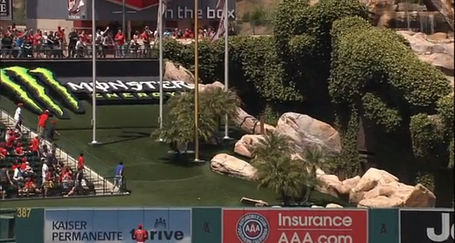 The ball is just above the highest boulder, by the R. The R in "MONSTER". Nelson Cruz hit the longest home run of the season, and it came down by an ad that reads "MONSTER". 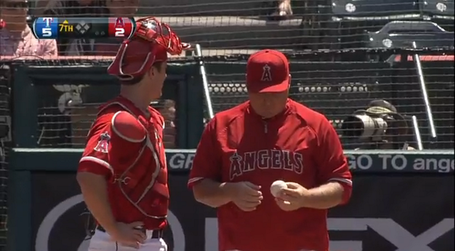 The Angels were left wondering what to do with all of their remaining baseballs, since Cruz's homer caused all of their pitchers to explode.

Location
40.5 inches from center of zone

Because of course Jeff Francoeur would show up in the Worst Swing category. I have to be honest, this one comes with a bit of an asterisk -- there were technically worse swings by Brian Bogusevic, Chris Snyder, and Mike Aviles. But all three of those were check-swings, and I just don't like to crown a check-swing here. It leaves a bad taste in my mouth, and I think it leaves a bad taste in your mouth. Better to see full swings like Francoeur's, which are just terrible. 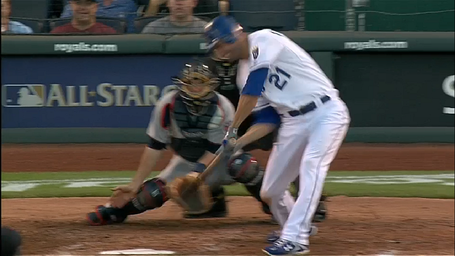 As with the Ricky Romero pitch above, what we have here is a screenshot of a pitch that doesn't show the pitch. I think that is something of a red flag. Also a red flag: 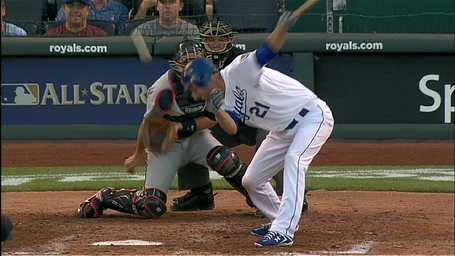 Completing a swing with your spine virtually parallel with the ground. Stand up, in a batting position, and then fake-swing, trying to end up in a position like the one Francoeur's in above. You probably can't do it, or you can't do it without hurting yourself. No problem for Francoeur, though. He's a natural at this shit.

Of course, as has so often been the case, I haven't given you the whole story:

So far in The Week In Worst, I'm finding that the on-base percentage of the worst swings is alarmingly high. Which makes some sense, since wild pitches get away from catchers and batters can reach when they whiff on two strikes. Sometimes batters hang around in the box, unaware that the catcher doesn't have the ball in his glove. Francoeur takes off for first immediately, because this wasn't his first rodeo. Isn't that right, Jeff Francoeur? 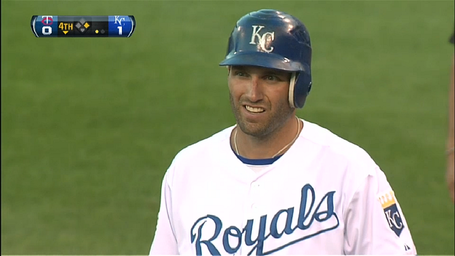 That's the face of a guy who swings at those pitches, and who knows exactly what to do when he does.

This was a routine ground ball, that even took a routine hop. Casilla had to charge in from his position, but this was nothing he hadn't done a million times before. He fumbled the ball with his glove, which was problem number one. He fumbled the ball with his hand, which was problem number two. Then he fell helplessly forward and wound up on the ground with the baseball motionless some feet behind him.

The worst part of this is after the play is over, when Casilla had to get up and return the ball to his pitcher. As Casilla walked to the baseball, everybody in the ballpark was doing nothing but thinking about what Casilla had just done moments earlier, and wondering whether Casilla could handle the ball now, now that it was sitting still.

Of course, Casilla had to make sure everybody knew he was sorry. Which means: Error Face. Show us your error face, Alexi Casilla. 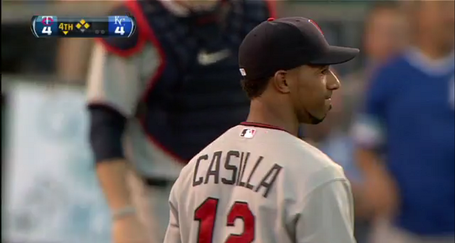 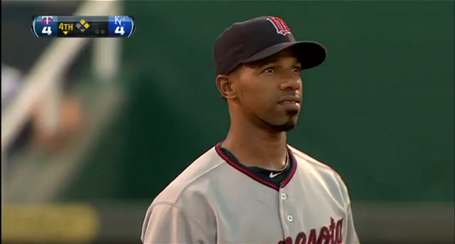 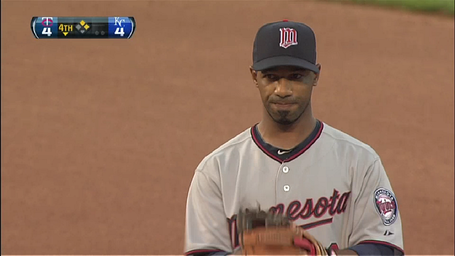 Atta boy. You may now cease to be the center of attention, unless you f*** up again like a complete idiot.

This is nowhere near as bad as Casilla's play, and I realize that. This was probably not the second-worst defensive play of the week. But I spent more time laughing at this play than I did almost any other, because here comes Logan Forsythe charging the easy grounder, and then he just keeps running forward, the ball continuing to roll behind him, untouched. It's like two steps after Forsythe misses the ball, he thinks "OH SHIT I FORGOT SOMETHING" and he just keeps running to the dugout. Forsythe was charged with an error even though his glove never touched the baseball. Turns out, that can happen. The official scorer just couldn't bring himself to be that heartless.