Jorge Soler And Sympathy For The Devil

The Cubs signed Cuban prospect Jorge Soler for a reported $30 million, which is the last deal of its kind. Remember that before the draft-signing apocalypse next month.

Share All sharing options for: Jorge Soler And Sympathy For The Devil

Bryce Harper was on the cover of Sports Illustrated when he was 16. He only attended high school for two years before getting his GED and going to a community college. His goal was to enter the draft a year earlier than the typical high-school draftee.

Maybe he was doing it to push himself, or because he loved the game so danged much. But at least a little part of the decision had to do with money. 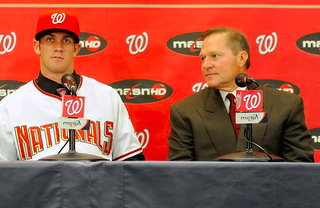 Okay, maybe more than a little part of that decision had to do with money. From the time he was 15, Harper was almost assuredly going to be the first-overall pick in whichever draft he entered. He wasn't going to get first-overallier by hitting better. His stock could only go down with injuries, so the sooner he went into the draft, the better. Even if he struggled in community college, his draft stock wouldn't have changed much. As far as excuses go, "What did you expect? He was 17 and playing against college kids" is a pretty good one. He still would have been the first-overall pick.

Except Harper dominated at Southern Nevada. He destroyed the league, hitting .443/.526/.987 and winning the Golden Spikes Award. He was hyped enough to make the cover of Sports Illustrated when he was a sophomore in high school, and when he should have been a junior, he was doing ungodly things against kids who were two, three, and four years older than him. He was already the most-hyped amateur prospect in decades, if not ever.

And after he was drafted #1, Scott Boras handled the negotiations. The result:

Jorge Soler was not on the cover of Sports Illustrated. As best I can tell, he hasn't been mentioned in the magazine yet. Baseball America gave a little nod to Soler in 2010, at the end of a profile of another Cuban defector. He's supposed to have fantastic potential, but he hasn't been likened to the once-in-a-decade types like Ken Griffey, Jr., Alex Rodriguez, or Harper. From Kevin Goldstein

This isn't a parable to lament the evils of the socialist amateur draft. But it's a reminder that just about every top-ten pick is getting grossly underpaid compared to what they'd receive on the open market. Stephen Strasburg. Bryce Harper. Bubba Starling. All of them. And this is also a note that it's probably the last reminder you'll see for a while.

Going over (the international free-agent cap) by more than 15 percent draws the 100 percent tax and prohibition to sign any player for more than $250,000.

It's possible that a team will forgo international free agents for a year to sign the Bryce Harper of the Dominican Republic, but nothing like that is imminent, certainly not for a prospect like Soler. This is the last time for a while that a team can see a prospect, decide they want him, and make you realize how much the draft rules hose amateur players.

And Harper was signed under the old draft rules. The new rules are more restrictive, with the penalties more onerous for breaking the cap. Things are worse now for amateur players.

Scott Boras is the Babe Ruth of extracting money. (Ryan Madson was Boras getting thrown out to end the 1926 World Series.) And in the next month before the draft-signing deadline, you're going to read about Boras doing some crazy crap to get more money for Mark Appel, who was drafted No. 8, but thinks he should get No. 1 money. Loopholes will be sought. Ultimatums will be given. And if you're a Pirates fan, your instinct will be to devise a covert operation to pee on Boras's luggage. I'm not going to tell you that you shouldn't do that. I can't afford new luggage. I'm staying out of this.

But it wouldn't hurt to think, "Yeah, Boras has a point", at least once a year. Then you can resume ... whatever it was you were thinking. Amateur players in the U.S., Canada, and Puerto Rico tend to get hosed, especially the more talented and hyped they are. It takes a player like Soler to remind us of this. And another one isn't going to come for a while.