Inside Pitches That Missed Carlos Quentin

Carlos Quentin gets hit by pitches all the time. Except for these times, even though the opportunity was there.

Share All sharing options for: Inside Pitches That Missed Carlos Quentin

Seriously though, he's like a pincushion, if baseballs were pins, which thankfully for Quentin they are not. Quentin made his major-league debut with Arizona in 2006. Since then he has come to the plate nearly 2,500 times. An even 100 of those plate appearances have ended with Quentin getting hit by the baseball, and I'm writing this before Quentin plays Wednesday night. He might get hit. He might get hit a few times. If anybody would, it would be Quentin.

Since 2006, Quentin has been hit in 4.1 percent of his plate appearances in which he didn't sac bunt or draw an intentional walk. The league average has been around 0.9 percent. Among all batters who have batted a thousand times, Quentin's hit-by-pitch rate is the highest, well north of Reed Johnson, Chase Utley, and Kelly Shoppach. Danny Valencia, incidentally, has yet to be hit once. According to Carlos Quentin, Danny Valencia doesn't know what he's missing.

How has Quentin managed to get hit so much? By getting hit by pitches like these: 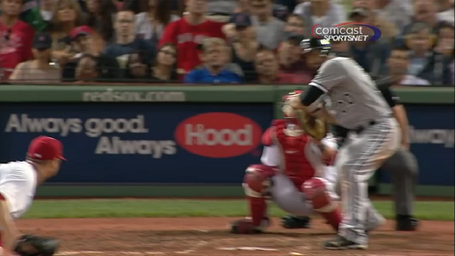 Okay, so Carlos Quentin gets hit a lot. I've actually already written about that before, as have others. I got to wondering about the most inside pitches that haven't hit Carlos Quentin. Have there been any? If so, how and why did Quentin avoid getting hit by them? I went to the PITCHf/x data and looked at pitches from between 2010 and 2012. Shown below are the five most inside pitches over that span that didn't hit Quentin in the body or the clothes.

Based on the sequence, it looks like this pitch hit Quentin. It actually didn't, but it was a ball, and it was thrown in a full count by Felix Hernandez. The pitch was 25.5 inches from the center of the plate, horizontally.

I've never really paid close attention to Nick Blackburn before, but the experience of watching him in this .gif is as boring as his statistics. This pitch missed the zone, and Quentin, and was 25.7 inches from the center of the plate.

Good try, C.J. Wilson! Aim for the feet! But Wilson missed Quentin's feet, which was actually good for him since why on earth would Wilson try to hit a batter in an 0-and-2 count? That doesn't even make any sense. This pitch was 26.5 inches from the center of the plate.

Boy, after a while, watching .gifs of pitches that don't hit batters feels like just watching .gifs of balls in old baseball games without sound or any understanding of the context. This pitch was 26.8 inches from the center of the plate. And we see Felix Hernandez again, interestingly enough, or uninterestingly enough. My opinion is not to be trusted because my opinion was that this article idea was worth pursuing.

Here is the most inside pitch that didn't hit Carlos Quentin from the last three years. It was thrown by Daniel Hudson last June, and it was 28.2 inches from the center of the plate. Quentin makes what at first seems like an evasive maneuver, but then you realize he's just sticking his hip out. Quentin tried to get hit by this pitch and failed, which I didn't realize was something that had ever happened.

Since 2010, Quentin has seen seven pitches more than 28.2 inches from the center of the plate inside. He was hit by each of them, and he was also hit by several pitches much less inside. As we've established, this is kind of a talent of Quentin's. Hit-by-pitches account for more than 11 percent of the times that Quentin has reached base in his career.

What have we learned from this exercise? Not much, as usual. Carlos Quentin is a pretty easy batter to hit with a pitch, relatively speaking. He's big, he stands close to the plate, and his elbow sticks out. Quentin doesn't go out of his way to get hit, but he also doesn't make any effort to avoid getting hit, which you think is against the rules but basically isn't as far as umpires are concerned. If umpires made a bigger deal about enforcing that rule, Quentin could be affected more than anyone else, but that probably isn't going to happen. So good luck to Carlos Quentin, to the San Diego Padres, and to whichever team might trade for Quentin as we approach the deadline. He's made it this far and his bones aren't jelly, and that could be another of his sustainable skills.