Tampa Bay Rays reliever Joel Peralta was ejected from a game against the Washington Nationals for having a foreign substance on or in his glove.

Share All sharing options for: Joel Peralta Ejected Due To Foreign Substance

Joel Peralta is a valuable setup guy for the Rays, and Tuesday night, he was asked to protect a 5-4 lead over the Nationals in the eighth inning. He warmed up, he took the mound, he warmed up some more, and then ... he didn't pitch. Davey Johnson came out of the Nationals' dugout and asked the umpires to inspect Peralta's glove. The umpires inspected Peralta's glove, confiscated it, and ejected him from the game.

Press box announcement on Joel Peralta: Ejected for having a "foreign substance on or in his fielding glove."

I will provide for you a worthless image of people looking at a baseball glove: 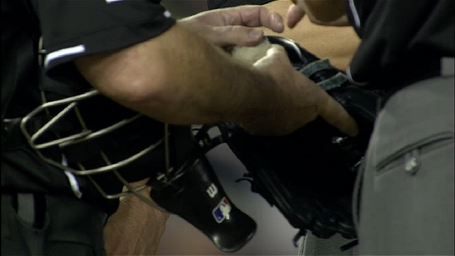 Interestingly, Peralta spent the 2010 season with the Nationals, so it's possible a former teammate decided to use this moment to take advantage of old knowledge. That is, if Peralta used a foreign substance in 2010. This could also be a coincidence.

Peralta was relieved by Jake McGee in the game. And this brings to mind the Jose Guillen/Frank Robinson vs. Brendan Donnelly/Mike Scioscia quarrel from 2005. Then, the Nationals used prior knowledge to eject an opposing reliever for using a foreign substance. Now, the Nationals used ... well you know already.