Amazin' Avenue: A Graphical Representation Of The Mets' No-Hitter Drought

Share All sharing options for: Amazin' Avenue: A Graphical Representation Of The Mets' No-Hitter Drought

As you no doubt know by now, the New York Mets had not had a no-hitter in their 50-plus year history, until Johan Santana threw one Friday night.

Via our SB Nation Mets site Amazin’ Avenue, here is a graphical representation of just how many games that is: 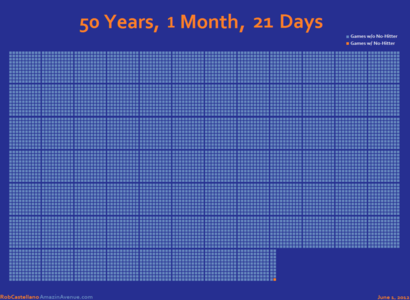 To give you another idea of how long this timespan is, the Mets played their first game on April 11, 1962.

That’s 18,314 days ago. Or, if you want other counts of the passage of time since then:

That’s an awful lot of time. Santana’s no-hitter leaves the San Diego Padres, who have been in business since 1969, as the only franchise without a no-hitter. Through Friday night, the Padres have played 6,895 games — so they still have 1,125 games to go to surpass the Mets’ total, or 2,050 games for the all-time consecutive no-hitterless record. That’s held by the Phillies, who had none from 1906 to 1964.

Check back on this in about seven years.