Mr. Producer, And All The Other Dead Racehorses We Don't Know How To Feel About

A horse was euthanized after a fall at Churchill Downs Saturday night. Nationally, this happens about five of every 1,000 times a racehorse enters a starting gate. So. Do we ignore it, rationalize it, or acknowledge that it's terrible?

Share All sharing options for: Mr. Producer, And All The Other Dead Racehorses We Don't Know How To Feel About

When I was at Churchill Downs Saturday night, I snapped this photo. Here we see all eight horses a few seconds into the ninth race of the evening. 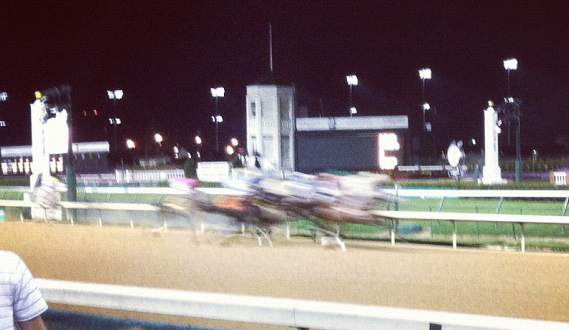 The group that passed through this stretch two minutes later was very different. Two of the horses were missing their jockeys and sort of galloped aimlessly, like helium birthday balloons that were carelessly left to drift. A third horse, Mr. Producer, was missing entirely. He lay on the dirt, not far from the finish line, with a fractured cannon bone he sustained after breaking down at the 16th pole. His jockey, John Velazquez -- who won the Belmont Stakes with Union Rags the previous weekend -- sat on the track with a broken collarbone.

I won't even attempt to give you what W.C. Heinz gave you: the attendants unfurled a large black curtain to obscure Mr. Producer from view, they killed him, and that was that.

So. How do I/we feel about this? These are the options on the table, I reckon:

Yes, I saw a horse die on the track. I'm super-special, because this only happens an average of 24 times a week on American tracks.

Who am I to think I can take some shitty Instagram and be all "ohmygaaahd u guys i saw a horse die :(((( " and instantly qualify myself to level judgment on an American institution that's over a century older than I am? Millions of people, living and dead, have experienced horse racing, and a lot of them are/were smarter than I am. It's like waking up one morning and deciding I would have built a way better railroad system.

The verdict was handed over long before I was born. Just let it stand, place some bets, have a drink or two, and have fun. Ignore it. Churchill Downs sure as Hell did. They posted video for all the other races that night. Not that one, though.

Responding to confusing issues by refusing to think about them is the recipe for a life that's comfortable, if profoundly mediocre and uninteresting. Personally speaking, I'm not the best about this. There are a number of pretty major issues on which I've passively sided with the vast majority because it's easy to do so. But I always tell myself I need to try. Because more than once, I've stepped over to the side of the small minority and realized just how wrong the vast majority was.

All those horses who die? They wouldn't be alive to begin with if it weren't for horse racing. The life of a racehorse is probably pretty okay, right? Sure, nobody wants to stand around in a horse trailer, but they're well-attended, they have doctors, they get to run around, and they seem to enjoy racing. And when they retire, they spend the next decade hanging out and makin' whoopee.

I don't know what percentage of horses die on the track, but for the sake of this discussion, let's just say ... two percent. Those horses are in pain for a couple minutes, and then their lives are ended humanely. Aren't those casualties acceptable? Especially as compared to the much higher "tough life, painful death" rates in the wild animal kingdom?

That standard is convenient, but unacceptably low. Human beings selectively, and knowingly, bred these horses into animals that are easily injured and relatively fragile. As such, the onus is on the horse racing industry to prioritize the health of these animals above anything else.

Maybe that means acquiring and racing horses that aren't injured as easily -- maybe the horses are slower, but if they're all slower, what's the difference? Maybe that entails going all the way back to the drawing board and completely derailing the horse breeding industry. But maybe that's our moral responsibility.

Or maybe we do away with horse racing altogether and re-purpose tracks for bicycle races. Those are super-fun to watch. You ever seen a kierin? Those things are crazy, man. We could probably figure out some way to bet on those.

Well, I eat meat, don't I? By my own standard, isn't that a hundred times more morally dubious?

I do eat meat. Most of the time I opt to completely ignore the moral implications. Sometimes I justify it by noting that that's how the food chain works, and sometimes I briefly contemplate a vegetarian diet before remembering how much I love pot roast. This is a comically slapdash rationale that I'm not particularly proud of.

If you're occasionally morally inconsistent and irrational, like I am, you get really good at something. That something is the ability and willingness to acknowledge your moral inconsistencies and quarantine them from your morally/logically sound beliefs. So yes, true, I do eat meat, and that's as good point, but I don't think it's necessary to move into a different debate.

Might makes right. We do it because it's fun and because we can.

3. Just admit it's shitty and continue to enjoy it.

This, honestly, will probably be where I end up. I've done 900 words' worth of thinking about it, but never mind that shit. The next time a friend calls me up and says, "hey, we're going to the track," I'm going to go to the track. I will know that for every 1,000 times a horse is loaded into the starting gate at Churchill Downs, it will end in injury 4.5 times, but I'll have a couple drinks, throw away a few bucks on some bets, and have a good time anyway.

Boycotting horse racing would make me "that guy," and being "that guy" is worse than supporting an industry that occasionally turns alive horses into dead ones and isn't doing as much as it should be to mitigate the frequency of these occasions. I am a shithead.

What about you? Are you also a shithead? Do you have any other rationales to offer? Do you even care? I'm curious to hear from you, because clearly, I still haven't figured it out.