eBay Item Of The Day

Share All sharing options for: eBay Item Of The Day 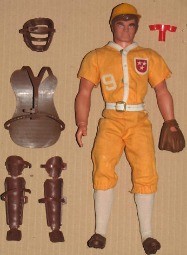 Big Jim, a 1970s action figure from Mattel, appeared to be attempting to pioneer two trends in baseball. The first, which did not catch on, was his super-awesome oversized uniform belt buckle. The second, which did, were PEDs.

And just what was that red thing supposed to be?

The buckle -- ideal for sharpening a corner on which baseballs could be doctored.