Even after R.A. Dickey ran into some problems Sunday night, he's still all plenty of people want to talk about. And there's a reason for that -- R.A. Dickey couldn't be more of a universal fan favorite.

I, like so many others, have spent more time than ever of late thinking about R.A. Dickey. Dickey did just Sunday struggle a bit against the Yankees, but that was the first time he'd allowed more than three earned runs in a start since April 18. Dickey could be forgiven for his figurative pothole, and still he's among the most effective pitchers on the planet. People have been talking Dickey up for weeks upon weeks, and it occurred to me that there haven't been critics. Maybe there have, but there haven't been critics that I've noticed. Nobody raining on any parades. By and large, people have embraced R.A. Dickey, and he seems to be getting more widespread support than most players who get so much attention.

Is R.A. Dickey the most likable player in baseball? If Dickey wanted to be more likable, would that even be possible? Allow me to try to quickly explain Dickey's rootability via the following scientific category breakdown.

Underdog
At one point, Dickey was the opposite of an underdog, as he was drafted by the Rangers in the first round in 1996. First-round draft picks aren't supposed to be eligible for underdog consideration; they're just supposed to be successes or disappointments. But then the Rangers found out that Dickey didn't have an ulnar collateral ligament in his elbow, and then after reaching the majors, Dickey was bad. He had to completely reinvent himself, and you know the rest of this story by heart. R.A. Dickey is just now teetering on the edge of being a household name, and he's 37.

That knuckleball clocked in at 54 miles per hour. Here's another knuckleball that Dickey threw this season:

Inspiring story
Dickey, of course, has overcome plenty of baseball adversity, and that might be enough. But then you recall the stories of past sexual abuse, and you remember that not too long ago Dickey entertained thoughts of committing suicide. We're getting deep here, and further discussion goes beyond my limited abilities as a writer, but suffice to say that Dickey has a hell of a personal story to tell, along with his professional story that's already beyond belief.

Personality
Dickey is insightful, eloquent, funny, and he named his baseball bats after fictional swords. He of course wrote his memoir, and this past offseason jeopardized his baseball contract to climb Mt. Kilimanjaro to raise awareness of human trafficking. Dickey is almost the complete opposite of the ordinary baseball-jock stereotype, and while nobody's personality appeals to everyone, Dickey's personality appeals to most. If you don't appreciate R.A. Dickey's personality, you're probably kind of a douche. 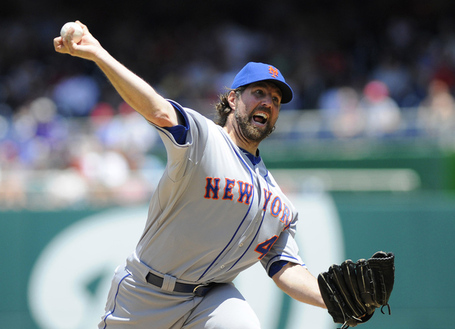 There isn't a better Pitch Face in baseball. I've done the research. Dickey throws fast knuckleballs and looks like he's going to eat you, and those are two very overwhelming things to think about as a hitter.

Tempo
This is something I just noticed recently, and it's an underrated component of what can make a pitcher likable. No matter what Daisuke Matsuzaka ever did, even if he lived up to the highest expectations, he would've achieved limited popularity, because in between every pitch, he takes the time to sketch a drawing of the pitch he just threw. Baseball fans don't mind a long game, but they have little tolerance for wasted time. Daisuke Matsuzaka wasted time. In between his pitches, there was nothing. There's nothing in between R.A. Dickey's pitches, either, but the time between Dickey's pitches is much much shorter.

This is a .gif I prepared:

That's a .gif of R.A. Dickey throwing two pitches. Both were taken, and, okay, this isn't a .gif I prepared because of the action it shows. Watch the first pitch, and then note how quickly Dickey throws a second pitch. He's like a regular Mark Buehrle. In fact, Dickey's pace is the fourth-lowest in baseball this year, at an average of 18 seconds between pitches. That's within one second of Buehrle, who's the perennial champion. Dickey's gotten better this year, and he's also gotten faster, making him more watchable. A player who's more watchable is a player who's more likable.

I think that covers the bulk of it. One thing Dickey might not have going for him is his team, since his team is the New York Mets, but at least this edition of the Mets is an underdog edition, and better the Mets than the Yankees. The Mets are an organization that in recent years you could've felt sorry for. And if Dickey didn't pitch in a major market like New York, who knows if he'd be getting all the attention? Who knows how many people would've heard of Dickey if he pitched in San Diego?

I'm having trouble imagining a player more rootable than R.A. Dickey is right now. The only ways I can think of a player to be more likable are completely unrealistic, and Dickey has achieved the unthinkable, where he's both a star player and an underdog at the same time. Maybe it won't last forever, because nothing ever does, but R.A. Dickey is a blessing for all of us, and did you know that David Wright has a four-digit OPS? There's a chance that you didn't, and maybe there's no better evidence of how much people would rather talk about R.A. Dickey than anything else.