It's no secret that I'm a Giants fan. The other half of my duties with SB Nation have me running a Giants blog. In the picture that you want to punch every time you accidentally scroll down too far on one of these stories, I'm wearing a Giants hat. Yet this is an article about a Dodgers player. It is filled with effusive praise and respect. This is not a contradiction.

And with this Giants partisanship comes a profound dislike of all things Dodger -- in a good-spirited, rivalry kind of way, at least. For a while, the only exception to this rule was Vin Scully. There are Giants fans who extend their rabid disgust of Dodgerana to include Scully. They are wrong. They do not speak for the rest of us. Vin Scully is the absolute best. He's the Rolling Stones of broadcasters. That is, he's the Rolling Stones if they released an album as good as Exile on Main Street every year for the last 62 years. There is no cheap comp for Scully.

I think there's another exception, at least for me. I can't loathe Clayton Kershaw. It pains me to admit it, but he seems like a nice feller. Does charity work. Doesn't take himself too seriously. But more importantly, his curveball is beautiful -- the Platonic ideal of what a breaking ball is and should be.

A video of the pitch:

This came on a 2-2 count with the bases loaded. It was, quite literally, the perfect pitch in that situation. It should catch the strike zone. It had to fool the hitter. It couldn't be too hittable. It was the perfect pitch. It made Vin Scully laugh. The progression: 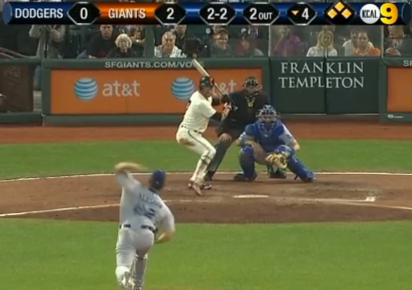 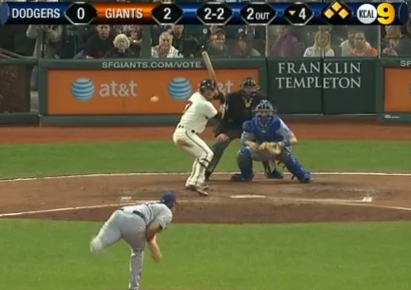 Gregor Blanco's brain: That's a fastball at your head.

Gregor Blanco's brain: THAT'S A FASTBALL AT YOUR HEAD. 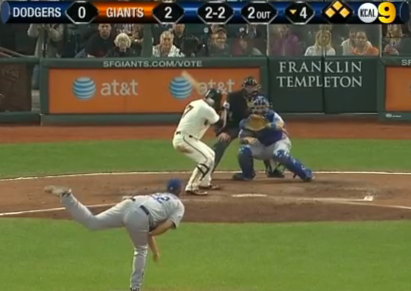 Gregor Blanco's brain: COME WITH ME IF YOU WANT TO LIVE. 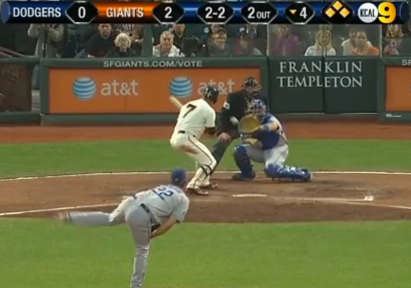 Gregor Blanco (to umpire): Oh, god, this guy's trying to kill me. HELP! HELP! Are you seeing this? HELP! Do something! 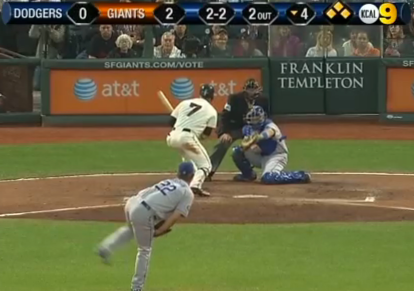 Mitt: /closes gently with a soft, delicate piff in the middle of the strike zone 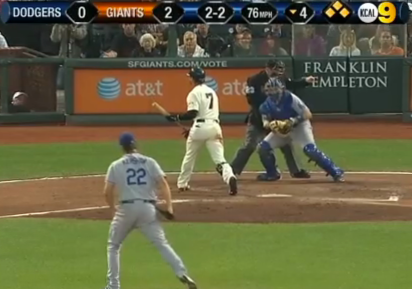 The angle of the camera makes those screenshots a little deceptive. Gregor Blanco's body language indicates that they aren't that deceptive, though. He thought the ball was going to hit him at one point. Batters only have a fraction of a second to make that first move out of the way. Blanco likes his teeth. He shouldn't feel guilty if the neurons in his brain were shooting out information that he could lose his teeth.

But baseball is beautiful between all of that other stuff. Regardless of the outcome, regardless of your team loyalties, there are moments where you can appreciate the overall design of the game -- it starts with a pitcher standing 60 feet, six inches away, and it includes a ball with irregular seams that, when gripped and spun a certain way, can make a hitter fear for his life. The hitter should be swinging the bat, which is what he's been preparing for his entire life. But he can't because his opponent just came as close to perfection as a baseball player can in a singular event.

No matter what happened with that game, or what will happen for the regular season, that was the kind of thing that makes us watch baseball. That exact thing. The small chance that we'll get to see that pitch in that exact location. Or another perfect pitch in another perfect location. A perfect swing on a hittable pitch. Something that's so good, it really doesn't matter what happens for the rest of the game or season. It's something that you can revisit completely out of context.

There are other pitches that come close to being perfect. This was just one of them. But this one happened on Tuesday, so you're reading about it today. The thesis statement is this: Hot damn, Clayton Kershaw's curveball. Hot damn.