We know that Joey Votto is a great hitter. But he's also a freak with how he puts the ball in play, too.

But the argument for the greatest of all time is settled. G'night. Nothing to see here. Because on September 22, 2008, Ricky Nolasco allowed three runs in six innings. That's a rulebook quality start. More importantly, though, he got Joey Votto to hit two infield pop-ups. In the same game. Two of them.

This makes for the greatest pitching performance of all-time because Joey Votto doesn't hit infield pop-ups. For Votto's career, he's hit 10 infield pop-ups. He has hit one since 2009. Tom Verducci has even more freaky stuff on Votto:

Votto has not popped up to the infield all season. In fact, he has popped out to the infield only three times in 2,138 plate appearances over the past four seasons.

Votto has pulled a ball foul into the stands only once in his entire major league career. Once.

Here's the last pitch that Votto popped up on the infield:

Fooled on a Zack Greinke curveball. There's no shame in that. And it almost reached the outfield. It takes borderline shenanigans to get Votto to pop it to an infielder.

What's the explanation, that Votto never gets fooled? No, that can't be it. We know he's mortal.

He can get fooled. He can take wild swings that could end with the ball going in a much different direction than intended. But it never goes straight up.

In the at-bat before he popped up against Greinke, he hit an opposite-field home run. After laborious research, I have determined this is because he's Joey Votto and of course he did. The home-run swing: 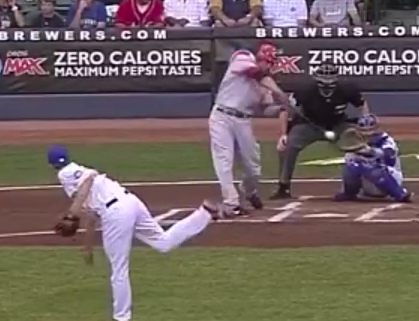 And now the pop-up swing. 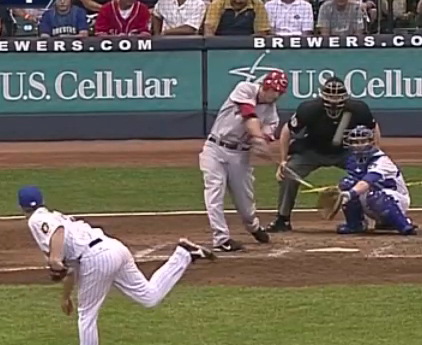 There's a clear and significant difference between the swings. The balance, the timing, the spot it hits on the bat … but it's not that different. It's still a left-handed hitter swinging at a pitch on the outer half of the plate. But whatever he does with his swing, it doesn't result in infield pop-ups. Of the 5,138 swings he's taken in his career, only ten of the resulting balls in play have landed softly in an infielder's mitt. Hardly any of them over the last three years. For comparison, Albert Pujols has more than 280 infield fly balls in his career. Prince Fielder has 113. Good hitters still hit a lot of infield fly balls. Votto doesn't.

On its own, this doesn't mean much. An infield pop-up isn't worth two outs. It doesn't automatically make Votto a more valuable hitter. But while we knew he was a good hitter, now we know that he's something of a freak, too.

And we can also appreciate the genius and execution of Ricky Nolasco, slayer of dragons, inducer of pop-ups.

I got halfway through the following research and realized it was useless and of limited appeal. But I was in too deep to stop and just throw it away. So here is the Official Repository of Joey Votto Infield Pop-Ups: