Catching up with The Franchise, Season 2

Share All sharing options for: Catching up with The Franchise, Season 2

Ah, The Franchise. Or as I like to call it: "The Dan Le Batard Show featuring the Miami Marlins." Okay, maybe that's an exaggeration. But you should prepare to be a fan of Le Batard if you're going to watch this show; virtually every scene of it is transitioned by sports radio hosts griping, and most of the time it's Le Batard, the preeminent south Florida radio host, doing the griping.

Even if you're not the biggest Le Batard fan, there's still plenty to like about The Franchise. It isn't the best sports reality show out there; that distinction is reserved for either 24/7 or Hard Knocks on HBO. But it's totally watchable. It's flawed, it's at times overly dramatic, but there are certainly worse ways to kill an hour. Plus you get to hear Ozzie Guillen swear a lot, and that's always fun.

In its first season, The Franchise -- which is the spiritual successor of The Club, a reality show that covered the Chicago White Sox on MLB Network in 2010 -- followed the defending-champion San Francisco Giants. This time around, the show is chronically the newly-christened Miami Marlins, with their new ballpark, new logo, new uniforms, new players and new manager Ozzie Guillen, who was the manager of the White Sox when The Club aired.

Luckily for us, Ozzie is still the same profane, no-holds-barred lunatic he was in 2010. And it's great. Ozzie swears so much that in his introductory meeting with the fish, owner Jeffrey Loria had a click counter on hand to tally the f-bombs. There were 97 of them. Sports are littered with pompous, self-righteous coaches who preach ethics and morality and write self-help books just before they leave their job to sign a bigger, better deal elsewhere. Ozzie isn't that. He may not be nuanced and he may not be a profound, inspirational thinker; but he is what he is. He's honest. Most of all he's a tremendous improvement over the last manager The Franchise covered, Bruce Bochy, who had all the charisma of a dead tsetse fly.

The season premiere of The Franchise aired last Wednesday, and the first episode was essentially a clip show highlighting all the things that happened to the Marlins in the first half of the year. New episodes will be produced on a weekly basis from now on, which made beginning the season with a clip show an odd decision; the newer episodes will probably have a completely different pace. Rather than sticking with a few narratives and building interest for the growing weeks, the show feels the need to cover them rapidly and chronologically, which is fine if you're a baseball fan. If you're not interested in baseball, however, the first episode may not have done you many favors. It goes from covering Ozzie to Stanton to Reyes to Samson to Zambrano to Bell to Stanton to Bell to Zambrano, it's too much if you don't know who these people are. Plus you never get a sense of their importance or role on the team; Hanley Ramirez is their best player, and yet he got less speaking airtime than backup catcher Brett Hayes.

Then again, I shouldn't nitpick what's ostensibly a catch-up episode. After all, in this episode we got to see what it was like behind the scenes for Ozzie Guillen and the Marlins' front office during Ozzie's "I love Castro" fiasco. We got to see Ozzie rip Heath Bell to his face when Bell whines that he isn't getting enough support from his team. "You fucking blow," Ozzie tells him. "Every motherfucker who is a Marlins fan doesn't want you on the mound tonight. The owner, the general manager, the fucking supervisor, the scouts, my wife, my kids, nobody wants you in the ninth."

Did I mention there was swearing? The swearing is actually pretty cool when it comes from Ozzie, because he's being himself, and we get to see a side of these guys that's hidden on ESPN and MLB Network. But there were a few moments when one of the Marlins players, clearly realizing the camera was on him, attempted to say something edgy and cool and failed miserably to make it sound natural. One such moment came from otherwise irrelevant utility man Greg Dobbs, who actually uttered these words: "People say it's only fun when you're winning, right? Hey, the winning is the end result. You know what's fun? You know what's really fun? Playing the game right. Playing the FUCKIN battle! Playing the game right as a team. Moving a fucking runner over, taking a guy out on a double play. I mean its fuckin em' up, cleaning his clock. Running fucking hard down the line on a normal ground ball. That's the shit."

One of the best aspects of The Franchise is that we actually get to see behind-the-scenes of the club in the middle of the season. Hard Knocks is great, but it centers pretty much exclusively on training camp, and often they'll go whole seasons with the team's best players barely getting practice work in. After a while, you kinda wish you could see the first-string players in action. With The Franchise, you don't get the adversity of seeing whether a random dude will make the team or not like in Hard Knocks, but you get to see real MLB players in real MLB games. You get to see Giancarlo Stanton hit a home run so fierce that it breaks the scoreboard; you get to see Jose Reyes return to New York and get booed; you get see Heath Bell struggle, then recover, then struggle again in a way that agonizes everyone; there's even a tremendous behind-the-scenes look at a trade the Marlins made, bringing in Carlos Lee and sending previous first baseman Gaby Sanchez to the minors. Not knowing he had been dealt, Gaby hit a game-tying home run in the ninth inning in what was his final at-bat, causing the men who just rendered him useless speechless. Even if you are a Marlins fan and you've seen all this before, it's still neat to see the players' perspective on it all. 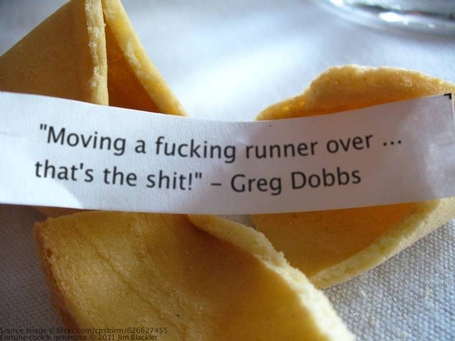 The problem with the show heading into its second year remains editing. I can live with the dramatic music that plays in the background the whole time; I wish they would do it more sparingly, allowing scenes to breathe a little, rather than reinforcing every tense moment with DUN-DUH-DUN-DUH!, and every sad moment with the piano theme from the Incredible Hulk. But I'm used to it. What's not acceptable, though, is the amount of radio and TV voices that are used throughout the program. I went back and counted how many times Dan Le Batard or the co-hosts of his radio show were heard in the season premiere; not counting times when someone said "Yeah" and "Mm-hmm," I counted 41 sentences from either Dan or his co-hosts. 41! And that's not including the litany of other radio personalities used, or the personalities from MLB Network and ESPN, and the local and visiting broadcast announcers. It's too much.

The Franchise even has a narrator, which makes it all the more confusing why there needs to be dudes on the radio reinforcing what's going on. This show is dominated by tertiary voices, and it's quite frankly a waste of time. I don't need to hear Dan Le Batard tell me that Heath Bell sucks. I have eyes: just show me him sucking, show me the players saying he sucks and Ozzie Guillen saying he sucks. Do it in a way that doesn't feel completely lazy; it's one thing if Le Batard said something brilliant, and they featured a comment from him that fit beautifully with what was happening on screen. But that's not what the producers are doing; they're specifically taking quotes from people like Le Batard and constructing whole narratives around it. They even cut to video clips of Le Batard saying the things he's saying. Nothing about it seems natural and un-staged.

In spite of its Le Batard overload, The Franchise is a good show. Let's face it, there are reality shows about complete nonsense these days: trash pickers, auction hunters, hoarders who keep their urine in jars. The Franchise covers something relevant and does a good job presenting it in a way that's entertaining. But its editing issues and incessant desire to pump sports talk radio into the ether is irritating, and needs to be abandoned if the show is serious about making its namesake a reality for Showtime.