A few days ago, against the Reds, Michael Cuddyer hit a home run. It might have been the worst of them.

Share All sharing options for: On Perhaps The Very Worst Home Run

For the longest time, if you'd asked me what has been the worst home run of the 2012 season, I would've given you one answer. On May 12, in Yankee Stadium, Jayson Nix stepped in against Hector Noesi. Noesi threw an outside fastball, and Nix poked it to right field. But of course, any poke to right field in Yankee Stadium stands a chance of going into the box score as something much more than that, and Nix's flare wound up leaving the yard. Barely, but they all count the same. The Home Run Tracker provides us with invaluable data, and Nix's homer left the bat at 89.8 miles per hour. It's the weakest home run hit so far this season, by that measure. It was given a standard distance of 326 feet, having gained some distance from wind.

That's just a really bad home run, relative to home runs. But now I think we have a worse one. Understand that I'm leaving out inside-the-park home runs, because those are a different stack of pancakes. I'm talking about home runs that were over-the-fence home runs, and Michael Cuddyer has hit one lousy home run.

How lousy? This is the home run:

All right, so it looks like a run-of-the-mill unimpressive home run. A home run that barely got out, but that managed to get out. This is how barely it got out: 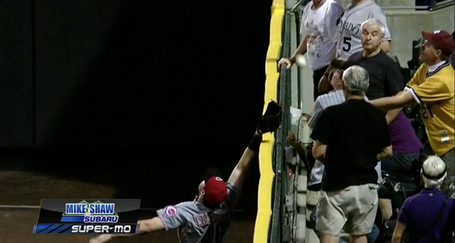 Barely. But there's so much more than just that.

This is Michael Cuddyer vs. Jose Arredondo in the bottom of the seventh on July 28. It was 8-5 Reds, and then Cuddyer swung, and then it was 8-7 Reds. The Reds wound up winning anyway 9-7 because the Reds are good and the Rockies are bad. Let's talk about the home run specifically, though. Firstly, it was hit in Coors Field. Coors Field stands at considerable elevation, and though the humidor has helped, it hasn't negated the elevation factor entirely. Fly balls still fly farther in Coors than they do in other stadiums. The Home Run Tracker gives Cuddyer's home run a distance of 363 feet, which is a lot. It attributes 31 of those feet to altitude, which is a lot.

It attributes two feet to temperature. Two feet are two feet, but conditions were warm, and warm conditions are more hitter-friendly than cool conditions. Now we get to the biggest factor of them all.

And the hidden factor, for those watching on video. Turns out it was exceptionally windy at the time that Cuddyer swung. Those within Coors Field would've noticed all of the fast-moving air on their faces, but those watching on video might have no idea. Cuddyer hit his home run with an elevation angle of 44 degrees. That is, the ball left the bat at 44 degrees above horizontal. 0 degrees would be horizontal. 90 degrees would be vertical. Cuddyer's home run has the greatest elevation angle of any home run hit this season, by more than a full degree.

Which means Cuddyer hit a fly ball well into the air, putting the ball in tremendous position to take advantage of the windy conditions. Which it did, as the wind grabbed the baseball and took it for the ride of its life. Had the wind been blowing in, Cuddyer's fly would've been knocked down. The wind was not blowing in; the wind was doing the opposite of that. According to the Home Run Tracker, Cuddyer's dinger gained 50 feet of distance from wind.

Put that all together. 363 feet minus 31 feet equals 332 feet, minus two feet equals 330 feet, minus 50 feet equals 280 feet. Cuddyer's home run was a fly ball with a standard distance of 280 feet, or, as the Home Run Tracker reports it, 290 feet. I don't know how to explain the discrepancy in numbers, but I'll side with the Tracker. Call it 290 feet. In no stadium are the fences 290 feet away.

What does 290 feet look like? Here's PNC Park, chosen basically at random. The two dots you see are approximately 290 feet from home plate. 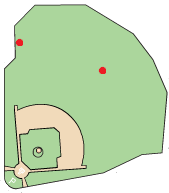 A 290-foot fly ball is a routine fly ball. A 290-foot line drive might be a single, double, or triple, or even an inside-the-park home run, but Michael Cuddyer didn't hit a line drive. He hit a fly ball 44 degrees above horizontal.

I don't know what Jose Arredondo thought about the sequence of events. The TV camera didn't linger on him long enough to capture his reaction, and even then we would've been left interpreting body language. The pitch he threw was elevated, but not that elevated, and over the plate, but not that over the plate. Gameday puts it at the thigh on the inner edge. Pitchers are pretty well trained to recognize batted balls as they're hit, each one having allowed a lot of batted balls over the years, and Arredondo presumably thought he got Cuddyer to fly out. Which, in a way, he did. Arredondo induced the right ball in play. It just became a ball out of play for reasons out of anyone's hands.

An inside-the-park home run, a wall-scraper home run, a third-decker home run, a home run that escapes thanks to altitude and wind -- every home run counts just the same. Home runs like this one make you think that maybe, just maybe, they shouldn't.