Share All sharing options for: Why Team USA's Small Lineup Is Working

Team USA has often played without a single big man in this Olympic basketball tournament, and while it's a nifty lineup in theory, it hasn't been nearly as effective as lineups with a big man like Tyson Chandler and Kevin Love. That is, until Sunday's gold-medal game.

Midway through the first quarter, Mike Krzyzewski took Tyson Chandler out and put Carmelo Anthony in, despite the fact that both Pau and Marc Gasol were on the floor for Spain. It was a risky play, even though Krzyzewski used that lineup often in this tournament. And yet, it worked well enough to get Team USA a nine-point lead.

Why? Mostly because of LeBron James. Look at how well he fronts Pau Gasol in the post, preventing the entry pass. 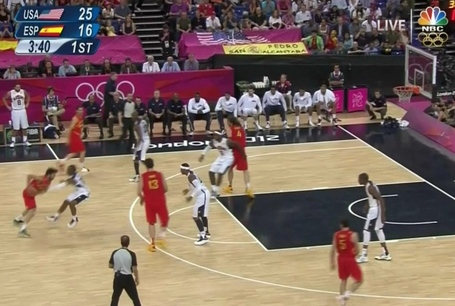 LeBron's been doing that all tournament, but he's on another level in this game. That kind of play eliminates Spain's size advantage.

One thing that also helps: the shorter three-point line. Because the perimeter players aren't as far away from the post player when making entry passes, it's easier for Team USA's perimeter players to double-team without leaving their man open.

Follow the gold medal game in our Team USA vs. Spain StoryStream.