Share All sharing options for: Does Andrew Luck's First Touchdown Need An Asterisk?

The NFL rookie quarterback hype machine has thrust Indianapolis Colts quarterback Andrew Luck into the spotlight following his 188-yard, two-touchdown performance against the St. Louis Rams on Sunday. Cementing the legend was a 63-yard touchdown pass to Donald Brown on Luck's very first play of the game. That play probably should not have happened.

Offensive guard Joe Reitz did some pretty clear holding on the play, locking on Michael Brockers with a bull rider's grip. You can kind of see it in this screen grab. 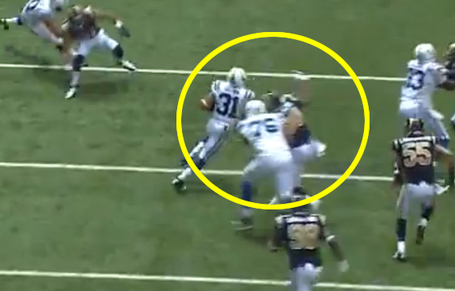 The hold is even more clear when you watch the video. And this was no ordinary clutch in the trenches. Reitz held Brockers, the Rams' first-round pick, as Brockers charged up field, not letting go until he pulled him down as Brown raced by on his way to the end zone.

You could blame it on the replacement refs, but every officiating crew misses a call like this occasionally. Though, this was a particularly obvious instance of holding.

Luck got his touchdown, played a great game and gave the world a look at what made him the first pick in the draft, despite the fact that his first touchdown probably should have come a little later.

Print the legend, as the man once said.