NFL Rookies Draw Their Own Football Cards: A Critical Analysis

Share All sharing options for: NFL Rookies Draw Their Own Football Cards: A Critical Analysis

A few months ago, the folks at Panini tried an interesting experiment. They handed blank cards and markers to incoming NFL rookies, and asked them to draw their own cards.

The resultant artwork was nothing spectacular, which is fine, because nobody assumes high artistic ability of NFL players. This, rather, is a clinic demonstrating how to mail something in. Just to establish a benchmark, let's look at the card drawn by Andrew Luck: 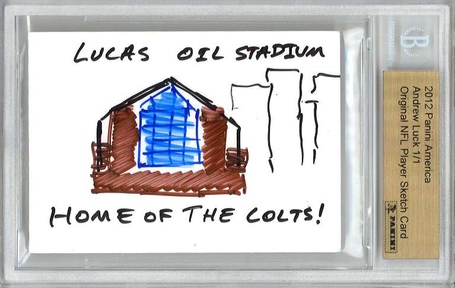 Not bad. The skyline implies that the Colts play in the Dr. Katz, Professional Therapist universe, but I mean, at least he tried. He drew a not-inaccurate representation of Lucas Oil Stadium, and even busted out multiple markers to draw it.

This stands in stark contrast, both in terms of quality and the give-a-shit factor, from most of the rest of these cards. These are the cards we will visit today. 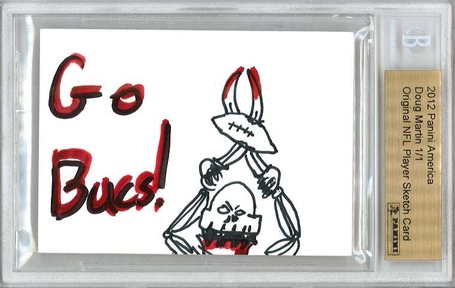 "Schmitty's Landscaping Services. How may I help you?"

"Yes, hello, I'm your customer at 1142 Wellington Terrace. I was calling because I have some concerns about the young man you sent over here."

"What seems to be the problem?"

"He is a reanimated skeleton with rotting muscle and sinew attached to his bones and a metric ruler where his nose is supposed to be. He won't do any work. He's just taking my football and attempting to play tennis with his pruning shears."

"You never told me you had a football!"

"Thank you for calling Schmitty's garden thing whatever." [hangs up] 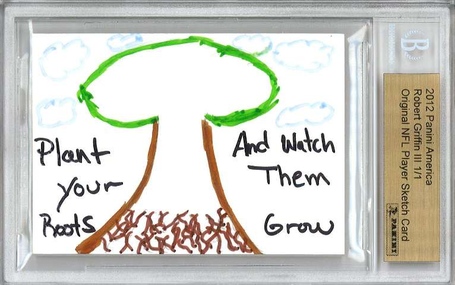 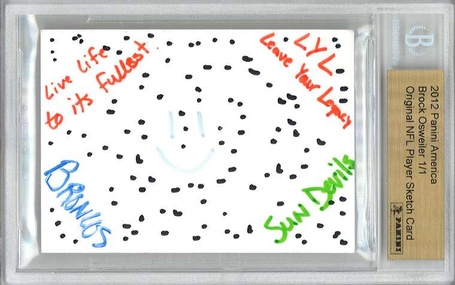 This could be a lot higher on the list, except I'm suspicious that this is supposed to be a work of high art. It's just a bunch of dots with a barely-visible smiley face in the middle. It's like a Magic Eye that actually works. 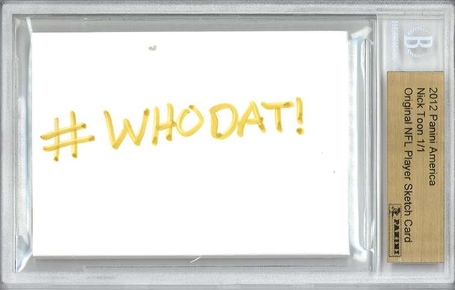 Wow. I wish Nick Toon would have Doug himself into his project a little more. After all, he's not in some amateur conference anymore, he's in the Action League Now! I wonder whether he Rugrats not giving more effort. 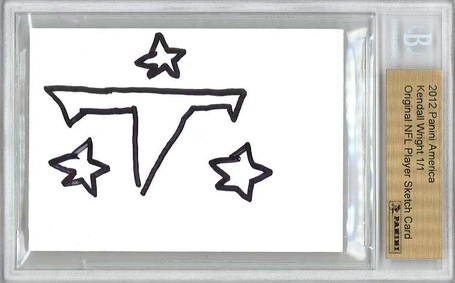 Oh look, a Rebus! OK, it's a T that's off-center, with some stars ... star T'ng off center? Nevermind, that doesn't make sense. T, uh ... star ... dammit. Just once, I'm going to enjoy a meal at Denny's without letting the placemat make me feel small. Just once. 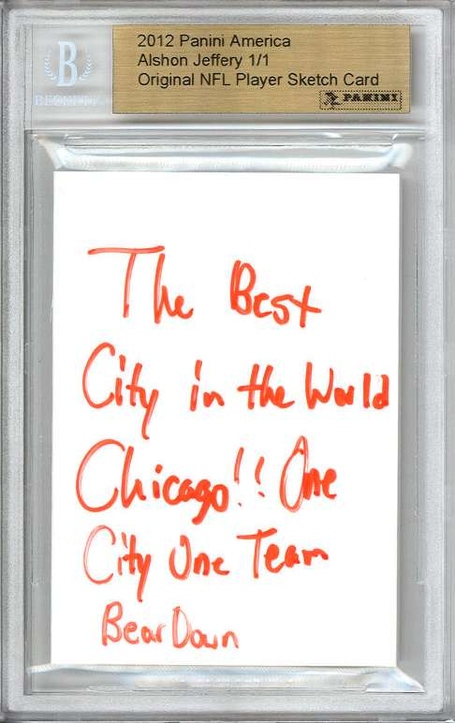 Whoa, OK. This isn't even a drawing at all, it's just a series of slogans written in drying marker. Let's call this one a mulligan, Alshon. Let's give you one more shot at this. 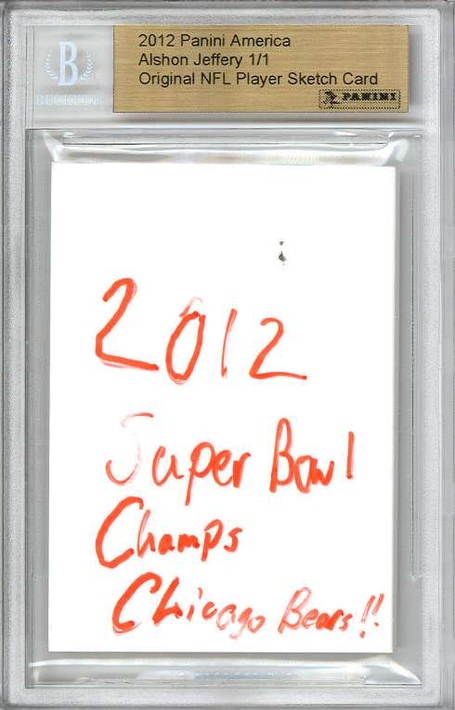 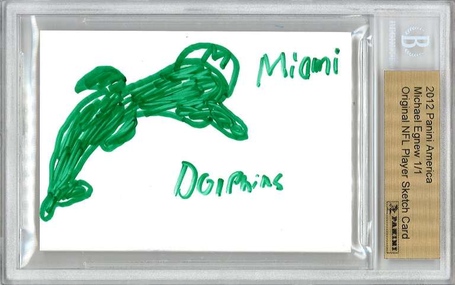 I see this and I see a hapless Panini intern just standing there holding an orange marker. "Mr. Engel, you uh ... you want this?" No answer. He fidgets. How do you look cool holding a single Crayola marker? He sticks it behind his ear. Oh God, no. I probably look like an architect who makes bouncy castles or something. He places it in his pocket. No ... no good. I'm going to forget about it and put it in the wash like I always do with my ketchup packets.

He peers over at Egnew's drawing. Oh God. He's actually filling in his green turd. Why? Five more seconds of humiliating, existential torture. 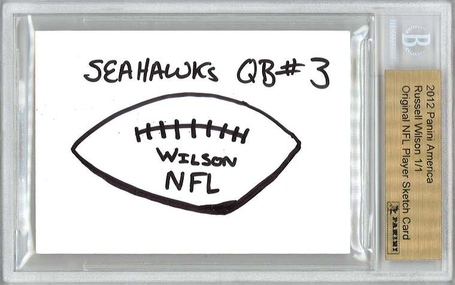 Ugh. I can only imagine how annoying this kid is in the huddle. "If we lose the football, don't worry. My dad's in charge of the football factory. He can just get us more for free." 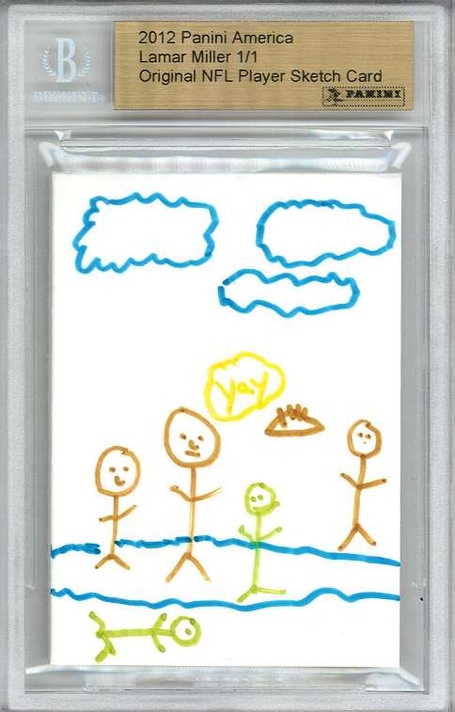 And this stands alone from the rest. It's such an honest, magnificent display of don't-give-a-shit. He is tumbling off the rocky face of Give-a-shit Mountain. The stick figures playing in the river (?) for no reason. The dead guy. The "yay." This is probably the right time to emphasize that I did not make this up, and that Lamar Miller actually did this. In doing so, he is instantly one of my favorite players in the NFL.