The Misery Of Dan O'Dowd And The Colorado Rockies

The Colorado Rockies are suffering through one of their worst seasons in franchise history, and GM Dan O'Dowd is almost out of ideas.

Share All sharing options for: The Misery Of Dan O'Dowd And The Colorado Rockies

You don't have to feel sorry for the Rockies and Dan O'Dowd, you should just know that everything is stacked against them, Colorado is the toughest place to play in the world, and they'll never figure out how to win because both nature and physics are unconscionable jerkfaces.

That's the main thrust of this fascinating interview of O'Dowd from 850 KOA in Denver. The headline is catchy:

According to O'Dowd, he offered to be the sacrificial lamb if Monfort felt there needed to be sweeping changes. But the article is mostly about the unique challenges of building a baseball team in Coors Field. O'Dowd is one of the longest-tenured general managers in baseball, and he's had the toughest job of any of baseball's 30 GMs. You might go with the Rays or A's for their payroll concerns, and that's valid. But I'll take the weirdness of altitude as the #1 obstacle for a person building a baseball team.

O'Dowd has tried just about everything since taking over at the end of 1999. He was the architect of the Mike Hampton/Denny Neagle contracts, arguing that the Rockies had to overpay free-agent pitchers to come to Colorado. He loaded up on sinkerballers. He made the baseballs heavier and wetter, trying to simulate what baseballs played like everywhere else. He did the same for the Rockies' Triple-A team starting this season. And this year, it looks like his strategy was to load up on pitchers who seemingly had an ability to lower the batting average of balls other hitters put in play.

It didn't work. The Rockies' rotation this season has a 6.35 ERA. For perspective, the pre-humidor 1999 Rockies allowed 1,028 runs. Think about that for a second: over a thousand runs allowed in a season. The rotation's ERA that year was 6.19. The Rockies' starting pitchers are doing worse this year with the humidor.

O'Dowd doesn't know quite where to go from here. But here are some conclusions we can draw:

That last bullet point was kindly omitted from the interview up there. Jeremy Guthrie was the Opening Day starter. Jamie Moyer went second. You can see where this is going. And after those two, the Rockies relied on youth. Juan Nicasio hasn't been a disaster (89 ERA+), but expectations were higher. Drew Pomeranz is struggling like a rookie playing in altitude for the first time, but he's holding his own (86 ERA+). Apart from that, it's been NC-17 all the way. The bullpen has been stellar. The rotation has been a debacle.

Some of it was out of the Rockies' hands, though. Jorge de la Rosa is still out after Tommy John surgery. Ubaldo Jimenez was traded away in a deal that looks brilliant now, as even if Ubaldo stuck around, he likely would have been a part of the problem. Jhoulys Chacin and Nicasio have been hurt. The Rockies had some disadvantages, so you understand why the rotation was put together on the fly. But that doesn't change the fact that when you looked at the rotation entering the season, the only possible response was "Ruh-roh."

So here's one solution to O'Dowd's woes: better pitchers. Crazy, I know. But that doesn't explain everything. The Rockies' long-held advantage at Coors Field has been missing over the last two years: 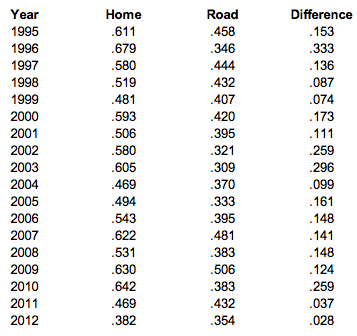 The typical difference between home and road winning percentage is about .082. Now, not only are the Rockies missing that advantage, they're underperforming what a team should do at home.

I know what some of you are thinking: Yes, 2011 happens to be exactly when Major League Baseball started overseeing the use of the humidor. So let's all agree to a couple of points:

Non-Rockie fans: Do you understand how convoluted and crazy a conspiracy like that would be? How many people would be involved, and how secretive they'd have to be? It's not like Chet in operations can just go into a vault and replace treated baseballs with untreated baseballs. Also, the umpires would probably be able to tell the difference between treated and untreated balls if they were secretly switched in the tops and bottom halves of the innings.

Rockie fans: You kind of have to admit the timing is a little weird. I'm not saying it even counts as evidence, much less proof. It's just a little weird. Proves nothing. At the very least, though, it's unfortunate timing.

If you really want a conspiracy, this will do nicely: 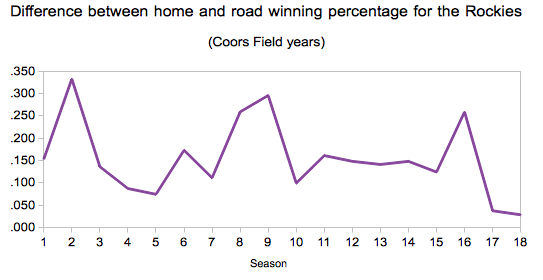 Wake up, sheeple. That's something that should hang on the walls of the Denver Airport.

The point isn't to dredge up the humidor controversy, though. It's to acknowledge the difficulty of building the Rockies. Assume there is no humidor conspiracy and there never has been. It's the likeliest explanation, after all. Now explain the sudden inability to win at home. The only correct response: Dunno. A sample-size quirk is also acceptable, I guess, but the best answer is dunno. Dunno! Who knows? Colorado.

There's a temptation to dismiss O'Dowd's complaints as the whining of a man who built a bad team. But that's too simple by half. Baseball's hard enough to understand for the normal teams in baseball. Add in what the Rockies have to deal with -- the decisions they have to make from rookie ball up to free agency -- and you understand that O'Dowd isn't whining. He's just honest and practical. And after a decade of this stuff, probably feeling a little defeated.