The 5 best things about the worst play you'll ever watch

The Houston Astros are not having a good season. Come, let us explore why, with the help of a single play.

Share All sharing options for: The 5 best things about the worst play you'll ever watch

I have no intention of pretending I can fill those shoes. I have no desire to be the Sammy Hagar to Jeff Sullivan's David Lee Roth. That analogy is even better if you know that both Sullivan and Roth were arrested in Central Park for buying drugs, but I'm not here to betray Jeff's confidence. The Week In Worst will never be equalled. There is no point in trying to mimic that particular brand of genius.

But every so often, a play will come along that requires closer inspection. A play so bad, so awful, it needs to be broken down and saved for posterity.

Besides, even though Van Hagar stunk in comparison to the original lineup, they still sold a metric crapload of albums.

There was a very Astros play on Monday night. It was, perhaps, the Astroest play we will ever see. And it was beautiful. Here were the five best parts of that play.

You can watch the video here. Please do.

Is it trite to suggest that you open a new tab with the Benny Hill theme in the background? Perhaps. But this is the kind of thing that reminds you why memes exist in the first place. There were players running into each other. There were overthrows. There was a runner making a mad dash for home moments after he figured he was going to be sliding into second base. When the angel came down from the heavens and whispered the melody to "Yakety Sax" into Boots Randolph's ear, this was what the angel was seeing when it closed its eyes.

The best part of the play, if you have to narrow it down, is the collision:

When does a cute kid make the transition and become a horrible, awful teenager? Where is that demarcation line? What sort of event triggers that particular coming-of-age?

The moment that kid yelled something at the Astros, he lost his innocence. He certainly had seen some form of bullying in and around his school by that point, but this was probably the first time he said, "I'm going to be the bully, and I'm going to do it in public. I don't care who's watching. The Astros need to know how bad they are. The Astros need to know, and I must tell them."

Look at the glee, the mirth in his eyes. He becomes a teenager at this moment. And then he turns around for the high-five. Before that, his whole life, it was his parents who would say, "High five, Ethan! High five!", and it was adorable. This time, he was the aggressor. It wasn't adorable this time. It was mean. And that's awesome. 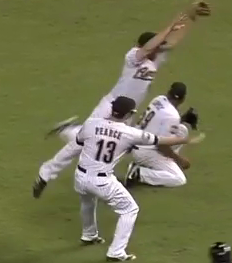 You watched the video. You saw the GIF. Did you notice Matt Downs trying to smother the ball, as if it were a grenade that was going to take out his platoon? I didn't until I saw each individual frame of the GIF. In a way, this is bittersweet. Sure, we had two baseball players making a coconut-like sound when they collided, and that was followed by a ball that went down the line. But what if the baseball hit a flying third baseman as he jumped into the play for no reason? What if it hit him in the midsection, or the …

No, I can't even imagine. The Internet would explode. It's perfect as is. Anything more is picking apart the coloring at the corners of the Sistine Chapel. Look at that picture again. That happened in a baseball game.

Nobody likes the Yankees, right? Yankees fans like the Yankees, but the rest of us are alternately repulsed by and jealous of them. So if the worst play in the world is going to happen, who should it happen to? The team that the most people dislike, right?

No, it had to be the Astros. The Pirates are good now. The Orioles are contending. There are so few rock-bottom teams for our amusement these days. We would have accepted the Royals, too, but even that wouldn't have been this exciting. The Astros are a new kind of bad. They haven't been bad for a couple of decades like the Royals, but they're concentrated bad right now.

The Astros have won four of their last 35 games. Only two teams in major-league history have been worse over a 35-game span: the 1909 Boston Doves and the 1916 Philadelphia Athletics. There hasn't been a worse stretch of baseball since Charles Lindbergh flew from Long Island to Paris, since movies had sound, or since the Yankees first appeared in a World Series.

And during this historic stretch, there was that play. It had to be the Astros.

5. Thinking about a Braves fan watching that play

I don't have anything against Braves fans, mind you. But this game mattered. It was a tie game in extra innings. The Braves had already won, and with a Nationals loss, the Braves would have crept to within two games of the NL East lead. There was some serious scoreboard watching going on.

The Astros actually tied the game in the ninth, giving Braves fans a little hope. All they needed was a single, a stolen base, a grounder, and a fly ball. Some permutation of those simple things, maybe with an error mixed in. Bad teams can do those things. They do them all the time. All they needed was just one run.

You can't laugh at the thought of an Astros fan watching this play. That's sadistic. They've had to watch far too much bad baseball -- enough for a decade. But the Braves fan putting his hands atop his head, pushing the baseball cap just a little askew as his or her mouth dropped in amazement … that person is just the best.

That play was so amazing, we couldn't even fit all the awful into a single GIF. Had to leave out the throw home from 225 feet, which was just as bad as anything else that went on in the play.

It was the perfect play, because it was so decidedly imperfect. It was baseball as found art.