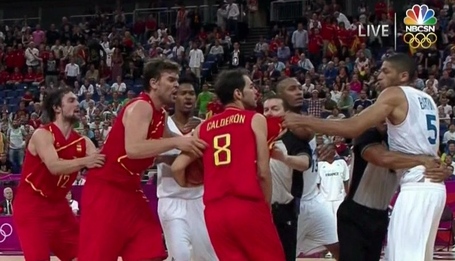 If not for the madness between Russia and Brazil in the pool play, France and Spain would be far and away the best basketball game of the Olympics so far. The game was close for virtually the entire time, and only in the final minute did Spain's victory begin to look secure. And with the hard-fought game slipping out of reach, France's Nicolas Batum lost with grace and dignit--just kidding! He sucker-punched Juan Carlos Navarro right in the nuts, setting off the scrum you see above.

A .gif of the cheap shot is below.

To everyone's credit the situation was diffused without any further incident. When asked about it afterward, Batum told Adrian Wojnarowski, "I wanted to give him a good reason to flop." Okay then... An ugly end to what was otherwise a pretty fantastic game. Hooray for Olympic spirit!