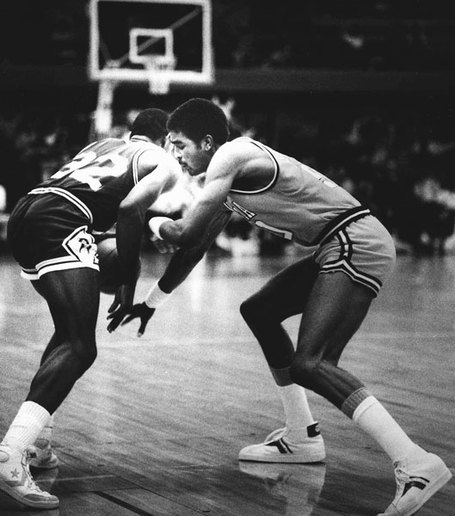 The greatest upset of a powerhouse college basketball team came in 1982, when Chaminade [shaw*man*od] University of Honolulu took on #1 Virginia. The Cavaliers had 7'4'' Ralph Sampson, who would go on to win his third consecutive player of the year award. Virginia was coming off "The Game of the Decade" against Patrick Ewing and Georgetown, a game where Sampson had 23 points, 16 rebounds and 7 blocks in a 73-62 win.

Virginia then went to Japan to play Houston, with Akeem Olajuwon and Clyde Drexler, and then Utah. Sampson contracted a virus and didn't participate in either game. The Cavs handled both teams anyway and hopped on a plane to Honolulu, where they faced the Chaminade Silverswords in a carry-over back to the United States.

Chaminade, an 800-student facility, posed no threat at all to the 8-0 Cavaliers. Virginia had just beaten half of the previous season's Final Four contenders; they had the best player in country; they were the best team in the country; and they had destroyed Chaminade in their previous two encounters. Chaminade, which was an NAIA school (meaning that they weren't even a part of the NCAA and were less relevant than a Division III school), was coming off a loss to Wayland Baptist University. Silverswords coach Merv Lopes remarked that it would be a moral victory to stay within 20 points.

Yet the Silverswords kept it close the entire way. Center Tony Randolph, who played against Sampson in high school, scored 19 points on 9-12 shooting and held Sampson to 12 points and 17 rebounds. At halftime, the score was tied at 43. The 3,500 spectators, who made their way to the makeshift arena that Chaminade had rented from a high school, came to see the best team in the nation.

"I never expected Chaminade to win," said Bill Hunt, one fan in attendance. "I kind of figured we were going to watch this great player. Instead we got this special treat: this scrappy Chaminade team."

In the second half, the Silverswords up-tempo play continued to rattle Virginia. Tim Dunham slammed an all-oop over Sampson that erupted the crowd and tied it at 58. "The alley-oop to Dunham really got us going and let us think we can win this game," said forward Richard Haenisch. 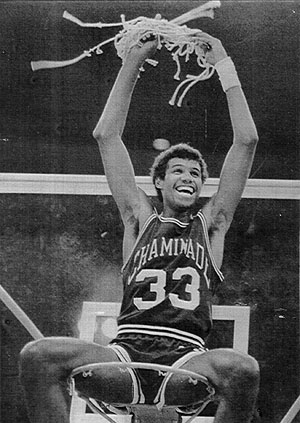 Later, with the underdogs leading 74-72 in the closing seconds, Virginia's Othell Wilson was called for carrying on a spin move. Chaminade made three final free throws to close it out, 77-72. The NAIA school that borrowed its towels from a hotel and shared its locker room with a local high school had somehow done the impossible. The Honolulu crowd rushed onto the court as the players began to celebrate; Haenisch sat on top of the rim and cut down the net.

Eventually the news of the upset crept onto the mainland. Newspapers in Honolulu carried the headline, "Yes, Virginia, there is a Chaminade." The college had planned to change its name to the "University of Honolulu," but with the new publicity stemming from its upset victory, school officials elected to remain it "Chaminade." Enrollment to the private university has since increased to over 1100.

Many analysts call the stunner the greatest upset in college basketball. Michael Wilbon, who was in Honolulu to cover the Aloha Bowl and was one of the few reporters in attendance, regards it as college's best underdog victory. After considering who Chaminade was up against, the fact that none of its players ever played in the NBA (though Haenisch became a seventh-round pick by the Jazz), and that they had no business even playing them, let alone winning, it's hard to disagree.

"You don't want to be known for just one game, but if it's going to be one, that's the one," Randolph said. "It was like I was reborn. Things turned out awesome, I was nicknamed 'Miracle Man.' I'm pleased someone sees me that way."

The following year, Chaminade began hosting the Maui Invitational, the biggest in-season tournament in the country. The Silverswords, now a Division II school, challenge the prominent Division I-A schools every season, hoping to recapture their magical upset of 1982. Their record in the tournament is of course awful, but if the miracle can happen once, there's no reason why it can't happen again.