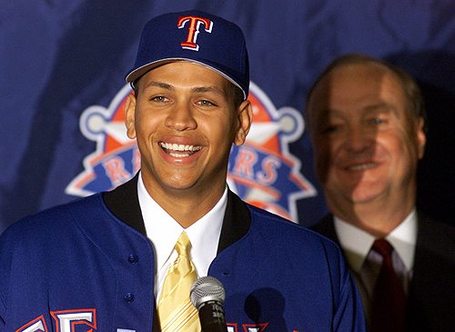 Alex Rodriguez's turn from a respected phenom to a hated pretty boy begins as the Texas Rangers announce that they have signed him to a 10-year, $252 million contract. Not only was it the largest deal in MLB history, it was the largest contract in the history of sports, twice as large as the next biggest deal (Kevin Garnett's $126 million contract). Rangers owner Tom Hicks wound up giving Alex Rodriguez $70-$80 million more than the next closest buyer, and even stated that A-Rod was undervalued.

Over the next seven years, Rodriguez was the best player in baseball not named Barry Bonds. But not even his three MVP's could overshadow his $25 million salary. Fans' resentment towards his gargantuan wealth gave them a reason to hate him. Whenever A-Rod didn't do something like hit a home run or deliver in the clutch, he was crucified in the press. And with a contract giving him $150,000 a game, it was no wonder.

In 2007, Rodriguez opted out of his contract and re-signed with the New York Yankees, who he had been traded to years ago. His new ten-year deal worth $275 million eclipsed his old one and assured that he would be a New York Yankee for a long time. 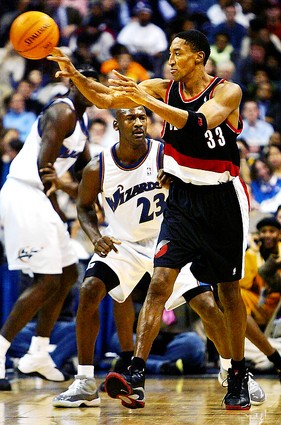 For the first and only times in their careers, Michael Jordan and Scottie Pippen play against each other in an NBA game. Jordan, on comeback tour No. 2, was suiting up for the Washington Wizards while Pippen was playing for the Portland Trail Blazers. The anticipated reunion of the dynamic duo was rather underwhelming: Portland crushed Washington, 98-79. Pippen got the better end of Jordan, producing 14 points, seven assists and five rebounds.

"It was a sad, sad game we played," said Jordan, who also scored 14 points. "The most unfortunate thing is that we can't take our checks and give them to our fans. It was unfortunate that they had to pay to see it.

"I feel I was a little bit more ready for this game,'' Pippen said. ''I knew there was a lot of attention being brought to it, and I wanted to answer."