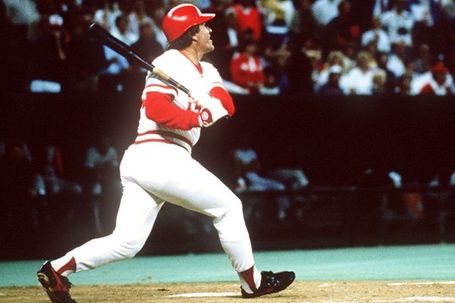 On a 2-1 slider from Padres pitcher Eric Show, Pete Rose knocked career hit number 4,192 into left-center field. With it, Rose replaced Ty Cobb's status as the all time hits leader, a mark that Cobb held for 57 years and was once thought to be unattainable. The at-times taciturn Rose emotionally waved to the Cincinnati crowd of 47,237 and then embraced with his son, Pete Jr.

Pete was an admirer of Cobb -- he named the son he had in 1985 "Tyrus" -- and insisted that the Tiger legend was still his superior. Statistics certainly favored Cobb, who reached 4,191 hits in two thousand fewer at-bats and had a batting average sixty-two points higher. But Rose had done it in era where pitching was far more prevalent and he was better liked by the baseball writers.

Interestingly enough, Cobb's career totals were revised in 1981 when historian Pete Palmer discovered that one of Ty's game totals had accidentally been counted twice. That meant that Cobb had really finished with 4,189 career hits (and that he didn't really win the AL batting race in 1910). However, then-commissioner Bowie Kuhn claimed that there was a "statute of limitations" on changing statistics and left them as-is. So even though every other tracker has Cobb with 4,189 hits, Major League Baseball still lists his total at 4,191.

"I'm not smart enough to have the words to really describe my feelings," Rose said after the game. "I didn't know what to do. I felt like a man looking for a hole to jump into. I was looking for someone to talk to. That was the first time I was ever on a baseball field and didn't know what to do. I can't explain my feelings. I've never had feelings like that before."

The day after he passed Cobb, the Cincinnati city council passed an ordinance changing "2nd street," a road that connected to Riverfront Stadium, to "Pete Rose Way." The honor was a peculiar one, as street-dedication was usually reserved to deceased people. Cincinnati was so enthralled with Rose's record that he got the commemoration anyway.

In 1986, Rose ended his playing career and focused on managing the Reds full-time. After 24 seasons, Rose retired at the age of 45 with 4,256 career hits and finished as the last player-manager in American sports.

In 1989, it was reported that the bat Rose used on Sept. 11, as well as the ball he hit and the red corvette he got as a reward, had all been sold to bookies. While these artifacts eventually found there way into collectors' hands, it was suspicious that someone with such an acute interest in history would give away the most prized possessions he had. Eventually it would make sense, and it not only threw the name of his street in question, but his Hall of Fame aspirations as well.