Today in Sports History: May 10th

Share All sharing options for: Today in Sports History: May 10th 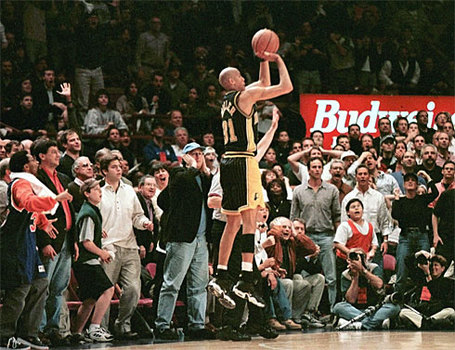 One of the best games in the 1970's ends on a signature move from one the league's best players. In Game 6 of the 1974 NBA Finals, John Havlicek hit an impossible shot over Kareem Abdul-Jabbar with only seven seconds remaining in double overtime. The Boston Celtics held a precarious 101-100 lead over the Milwaukee Bucks, and Havlicek -- who had also sent the game to the first and second overtimes on shots -- was poised to be the hero.

But Adbul-Jabbar was not dismayed. On the Bucks' next possession, the 7'2'' center received the ball from the top of the key, dribbled to the baseline and put up a running, 17-foot sky-hook. The game-winning shot was nothing but net and tied the series at three games apiece.

"It was supposed to be (Jon McGlocklin's) shot, but everybody else was covered, so I took it," Kareem said.

"It's a tough shot for him to take," Havlicek said. "But what can you say? He's been shooting and hitting on the sky-hook the entire series.

In Game 7, a resilient Celtics team responded in a big way by winning the decisive game handily, 102-87. Milwaukee could take solace that they at least won a championship in 1971, becoming the fastest expansion team to ever win a title. Just a few years later, the Bucks traded Abdul-Jabbar to the Los Angeles Lakers, where he won five additional NBA titles -- in contrast, Milwaukee wouldn't win another title for the rest of the century.

Not to be outdone by an Isiah Thomas game-winner and a double overtime Celtics-Bucks game, both of which had occurred earlier in the day, Eric "Sleepy" Floyd put on one of the most tremendous performances in playoff history. Down 14 coming into the 4th period, Floyd scored 29 points in twelve minutes to propel his Warriors to a victory over the championship-bound Los Angeles Lakers. He made 12 consecutive shots and wound up with 51 total points.

Floyd's performance gave him the playoff record for field goals in a half, points in a half, field goals in a quarter, points in a quarter, and consecutive field goals. The feat has since gone largely unnoticed since the Warriors lost the series and Floyd wasn't as epic a star as LeBron James, Reggie Miller, or Michael Jordan. It would be another 20 years before the Warriors won a semi-finals game.

Reggie Miller does it against the New York Knicks in the playoffs, again.

In Game 4 of Indiana's 1998 semifinals series, the Knicks were close to tying the series at 2-2. With only 19.3 seconds remaining the contest, the Knicks were nursing a three-point lead. Pacers center Rik Smits drove into the lane. His shot over Patrick Ewing was off; Ewing tapped the ball away from the hoop, but right at Pacers' forward Chris Mullin. Mullin quickly batted it to Mark Jackson, who immediately swung it Reggie Miller on the left side of the floor.

The fans at Madison Square Garden watched in horror as Miller, who had burned the Knicks time and time again, went up for the most open three-pointer of his life. Miller's shot was nothing but net and tied the score with 5.1 seconds left.

"They were stunned when I hit it," said Miller, who scored 38 points "I like to feed off the emotions of the crowd and language of the players. I looked into Allan Houston's and (Patrick Ewing's) eyes, and they didn't have that same fire they had when they were building their 8-point lead."

The game went to overtime and the Knicks, shellshocked by Miller's shot, quietly faded away. The Pacers won, 118-107, and gained a 3-1 lead in the series. In Game 5, Indiana ended the series with a 99-88 victory and headed to the Eastern Conference Finals, where they ran into Michael Jordan's Bulls.

For the second time in two years, an NBA franchise moves to another city. This time it's the Charlotte Hornets, who the owners allowed to move to New Orleans with a vote of 28-1 (the Grizzlies were the lone exception). It was a stunning moment for a franchise that had led the league in attendance when they joined the league in the late 80's. Enthusiasm for the team was high, but a series of terrible decisions by owner George Shinn put the fans at odds with the organization. In their final season in Charlotte, the Hornets were dead-last in the league in attendance.

The Hornets were playing the New Jersey Nets in the postseason when the announcement of their move was made. Coach Paul Silas described how difficult it was for his team to focus on the task at hand. "It's like a kid when his parents go through a divorce," he said. "It affects him, but really he has nothing to do with it. That's kind of the way this was. All the questions were directed at us. Our owners weren't saying anything and, really, the other side wasn't saying a lot, so we got kind of stuck with it. We've done what we're supposed to do. We won games."

Two days later, the Nets played at home against the New Jersey Nets in Game 4 of their semifinals series. Only 13,864 fans -- 6,000 short of capacity -- filled Charlotte Coliseum to see the final Hornets game in North Carolina. The Nets won, 89-79, and closed out the series in Game 5.

In New Orleans, where the team was given a brand new arena, Shinn expected the Hornets to sell like hotcakes. The city had not had an NBA franchise in over two decades, when the the New Orleans Jazz moved to Utah. However, the city's fanaticism with the game of basketball had cooled since the days of Pete Maravich. New Orleans posted horrible attendance numbers in their first several years, and Shinn even contemplated moving the team again. Eventually the Hornets were able to find a stable fanbase, though not before the team temporarilly relocated due to Hurricane Katrina.

In 2004, Charlotte was awarded an expansion team: the Charlotte Bobcats.