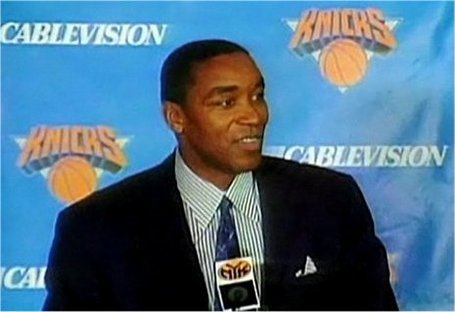 (Isiah getting introduced to New York. Screencap courtesy of ESPN)

When Ernie Grunfeld became the Bucks' general manager in 1999, the New York Knicks began a long, downward spiral of failure. Scott Layden, who had worked with the Utah Jazz for roughly two decades, filled Grunfeld's seat as the Knicks' GM. Layden's tenure with New York was a disaster. He traded an aging Patrick Ewing for Glen Rice and Luc Longley, a trade that began a long run of bad transactions for high-salary players. Layden re-signed Alan Houston to a whopping $100 million contract, which Houston never lived up to. He traded Latrell Sprewell for Keith Van Horn; he stocked the roster with Utah products and gave them ludicrous amounts of money; Clarence Weatherspoon was awarded an $18 million contract; Howard Eisley and Shandon Anderson earned $83 million between them.

One week after U.S. forces discovered Saddam Hussein in a spider hole, Knicks' owner James Dolan fired Layden due to the team's steep decline. On the same day, Dolan announced that Hall of Fame point guard Isiah Thomas would be taking over as the president and general manager. Thomas had previously run the Toronto Raptors and Continental Basketball Association, and failed with both of them. But he had done a decent job as the coach of Indiana Pacers, and the anticipation over Thomas was notable. Stephen A. Smith, who would spend the next five years crucifying Isiah, told the Knick fans to celebrate because brighter days were on the way.

Where Layden had used a shovel to dig the Knicks into a hole, Thomas replaced it with a bulldozer. Where conventional wisdom would have been to stop the big spending, Isiah furthered it. He traded for malcontent Stephon Marbury, who had over $70 million left on his contract. Other high-priced players to join the team were Tim Thomas, who had a $66 million deal, Nazr Mohammed ($28.5 million), Jared Jeffries ($30 million), Vin Baker ($35 million), Jerome Williams ($40.8 million), Malik Rose ($42 million), Quentin Richardson ($43.5 million), Maurice Taylor ($48.8 million), Jamal Crawford ($55 million), Steve Francis ($80 million), Zach Randolph ($84 million), Anfernee Hardaway ($86 million), and Jalen Rose, who was in the latter stages of a $93 million deal.

Two moves epitomized the Knicks' failure in the front office. Thomas acquired Eddy Curry for $56 million in a sign-and-trade deal with the Chicago Bulls. Curry's effort with the team was lackluster; his defense was embarrassing and he averaged less than one block a game. As if getting him wasn't bad enough, Thomas had traded two first round picks to the Bulls in order to acquire him. The other one was a $30 million deal to Jerome James, who would spend the bulk of his time with the Knicks on the inactive roster. In the 07-08 season, James played a grand total of five minutes, equating to $1.2 million per minute.

The team's status dipped from mediocrity to calamity. Thomas' first pick as head coach, Lenny Wilkins, resigned because he didn't approve of the team's direction. On July 28, 2005, Larry Brown was hired as their next coach. His $50 million contract made him the richest coach in sports history. Brown had the reputation of being a team-fixer, someone who could come in and quickly turn a franchise around. He made the Clippers a playoff team, the Sixers a finalist, and the Pistons a champion.

Yet even he couldn't repair the Knicks. Brown clashed with the New York roster -- particularly with Stephon Marbury -- and turned to Isiah to change the team. Thomas acquiesced and acquired more and more overpaid players at Brown's request. The season was an utter disaster. New York finished 23-59, the worst record in the NBA and the second-worst record in Knicks history. Larry Brown was fired in the offseason; stepping in as his replacement was none other than Isiah Thomas, who was then the GM, the president, and the coach of the Knicks.

The tabloids reveled in the Knicks debacle. Because the team was considered the most important franchise in the NBA, and because his ousting seemed long overdue, demands for Isiah's termination came more frequently than for any other GM in history. While Isiah's incompetence placed himself in the news every couple days, the New York Knicks became otherwise irrelevant. The team that once showcased 455 consecutive sellouts was no longer featured on national television. Boos at Madison Square Garden were more common than cheers and "Fire Isiah" chants strung from the crowd.

In December 2006, the Knicks and Nuggets engaged in the league's first serious brawl since the Malice at the Palace. Isiah had told Denver's Carmelo Anthony to not drive to the basket, and when Nuggets' guard J.R. Smith went for layup less than a minute later, Mardy Collins sent Smith to the ground. The two teams began to scuffle, and Carmelo leveled Collins with a punch to the face. Thomas was not suspended, though many blamed him for instigating the conflict.

Later that season, James Dolan handed Isiah a three-year contract extension. The Knicks CEO told reporters "I believe we have clearly seen significant and evident progress." At the time, New York was 29-34. 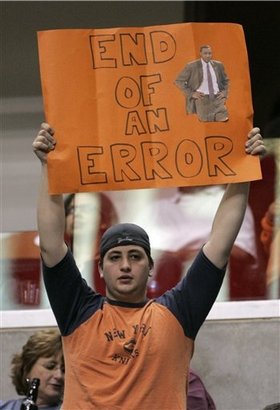 Isiah's troubles went beyond the playing court. In September 2007, Thomas was found liable in a sexual harassment suit by Anucha Browne Sanders. Dolan and Madison Square Garden were forced to pay her $11.6 million in retribution. The judgment was one of the largest sums of money ever awarded in a sexual harassment case (though in fairness, she got $11 million more than she should have. To put it in perspective, Rae Carruth murdered his pregnant girlfriend and only had to pay $6 million to her estate).

The Knicks regressed in the 07-08 season and bottomed back to 23-59. By then, Isiah had lost complete control of the team. Early in the year, Thomas decided that Marbury was better suited to come off the bench. However when Starbury learned the news, Stephon told Isiah that he wouldn't play if he wasn't in the starting lineup.

"Isiah has to start me," Marbury told teammates according to an anonymous source. "I've got so much (stuff) on Isiah and he knows it. He thinks he can (get) me. But I'll (get) him first. You have no idea what I know." Only a week later, Marbury was back in the starting lineup.

Near the end of the season, Donnie Walsh was hired as the Knicks president. Walsh had spent the previous two decades running the Indiana Pacers and had them in the postseason 16 times in 17 years. Walsh had hired Isiah as the Pacers coach back in 2000, leaving some to speculate that Thomas would remain in control of the organization. Only two days after the end of the NBA season, Isiah Thomas was fired and relenquished of his coaching and managerial dutues.

It's a shame that Isiah's image was tarnished as much as it was. As a player, he was one of the greatest competitors the NBA ever had. But in New York, he turned the league's most significant franchise into a laughingstock. Had Dolan not liked him so much, he would've been fired long before the "Fire Isiah" chants.