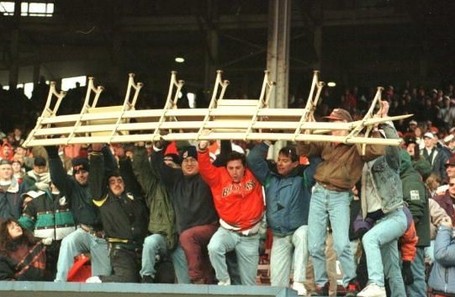 Enjoyed yesterday's story about the Browns fans who went berserk over a questionable call? Well, it was one day and six years removed from an even more memorable Dawg Pound moment. With Art Modell promising to move the team to Baltimore the following year, the Browns played in what was supposed to be their final home game in the city of Cleveland. It was a devastating moment for Browns fans, who were some of the most ravenous football fanatics in the country.

As the clock started to wind down on the Browns' existence, the fans decided to make themselves heard the way only a Cleveland sports fan could. Mimicking the Washington Senators' final home game, the crowd grabbed seats and hurled them onto the playing field. They tore chunks out of the bleachers and started fires throughout the stadium. What some might have considered an embarrassment was a really display of appreciation from the midwest faithful -- a final farewell to the Cleveland Browns.

That game was the final event to ever take place at Cleveland Municipal Stadium; after 58 years, it was demolished eleven months after the football team left town to became the Baltimore Ravens. In 1999, Cleveland fans got the Browns back in the form of an expansion team, with the same uniforms, helmets, and name as the previous team.

The Browns migration to Baltimore was just one of a series of transitions teams made in the 1990's. With the prospect of a better stadium, the Houston Oilers moved to Tennessee, the Los Angeles Rams moved to St. Louis, and the Los Angeles Raiders moved back to Oakland, while teams such as the Buccaneers, Bears, and Cardinals strongly considered leaving for another city... but didn't do it.

The Toronto Raptors trade Vince Carter, the face of their franchise, to the New Jersey Nets for Eric Williams, Aaron Williams, an aging Alonzo Mourning and two first round draft picks. Carter, 27, had been one of the most exciting players and leading scorers in the NBA since his rookie season in 1999. But through 20 games, Vince was averaging only 15.9 per game and was dealing with a strained Achilles' tendon. More importantly, he had become disconcerted with the Raptors organization and had requested a trade earlier in the year.

With New Jersey, Carter quickly returned to his old self and helped the Nets become a factor in the East. With a trio of Jason Kidd, Richard Jefferson and Carter, New Jersey overcame a 12-24 start and made the postseason with a 42-40 record. They remained competitive for several more years, however they were never able to challenge the elite teams in the Eastern Conference: Detroit, Miami and Cleveland. In 2008, New Jersey dropped off completely and missed the playoffs with 48 losses.

In 2009, in an effort to rebuild, the Nets traded Carter to the Orlando Magic for Rafer Alston and Courtney Lee. By that point, Jason Kidd and Richard Jefferson had already been dealt.