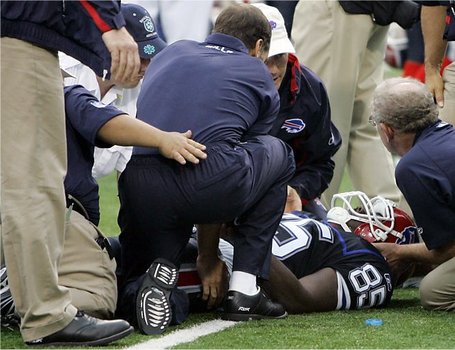 (Everett lays motionless on the ground. Photo courtesy of the Associated Press)

In the closing seconds of a game between the Denver Broncos and the Buffalo Bulls, Broncos kicker Jason Elam converted on a last-second field goal as time expired, handing Denver a thrilling Week 1 victory. But the bigger story had happened more than an hour earlier, when on the opening kickoff to begin the second half, Buffalo tight end Kevin Everett got in a helmet-to-helmet collision with Domenik Hixon. Everett tackled Hixon on the play, and in the process damaged his neck to the extent that he was completely immobilized. The game was stopped for 15 minutes as an ambulance arrived to take him to Millard Filmore Gates Hospital. Both teams knelt at midfield to give him their prayers; football was not a sport devoid of devastating, career-ending injuries, and it appeared Everett had suffered just that.

Everett underwent emergency surgery on his third and fourth vertebrae, which had been fractured during the hit. The Bills tight end had dislocated his neck and had lost voluntary control of his body. The outlook was grim. Everett's doctor, Andrew Cappuccino, described his chances of walking again as "bleak or dismal," and said the injury was potentially life-threatening. Other reports described the damage as "catastrophic."

Though a great majority of life-threatening football-related injuries occurred at the amateur levels, NFL players such as Reggie Brown, Dennis Byrd, Derrick Burroughs, Darryl Stingley and Mike Utley had suffered paralysis as well. Brown, Burroughs and Byrd were able to walk again, while Stingley and Utley remained quadriplegics; all five had their careers come to an end by their injuries.

However, Everett had the medical advancements of the 21st century available to him, something none of those five athletes had. He was given a saline solution that lowered his body temperature and nullified the damage to his spine. The method had been developed by the Miami Project, which was founded by former NFL star Nick Buoniconti after his son became paralyzed in a football game.

"It's the earliest example of someone being administered this cool solution within minutes of a catastrophic injury to the brain or spinal cord," said Barth Green, co-founder of the Miami Project. "It's like putting an ice pack on a bruise, but (with) this cool saline, the body was like the ice pack for Kevin's spinal cord."

Within days, Everett regained movement in the lower half of his body. A month later he was able to walk, and ten weeks later he was released from the rehab center. Everett's recovery was considered a medical miracle and was easily the most up-lifting sports story of 2007, a year headlined by Michael Vick, Pacman Jones and Barry Bonds. Everett's luck was magnified a week later when Redskins safety Sean Taylor, who was gunned down by burglars from inside his house, died at the age of 24.

The first game where Everett returned to the sidelines had the Bills facing the eventual-champion New York Giants. By that point, Domenik Hixon -- who was waived by the Broncos -- had signed onto the Giants. Hixon stated he had experienced nightmares over the September collision and felt awful about what had happened to Kevin. "There was a lot of praying. I couldn't really sleep," he said. "You just basically changed somebody's life. People would say, 'It's not your fault. It's not your fault.' But regardless of whose fault it was, his life was drastically changed and I was involved with that. That was the toughest part to deal with."

Although Everett's recovery was nothing sort of phenomenal, his career ended the moment he hit the turf. Though he never returned to the NFL, the fact that he could walk again after being paralyzed from the waist down was monumental, especially in a year where inspirational sports stories were at a minimum.