Onward to SBNation.com; A Fond Farewell to Inhistoric

Share All sharing options for: Onward to SBNation.com; A Fond Farewell to Inhistoric 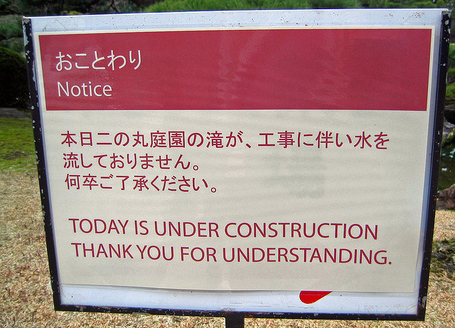 (via Ruth and Dave's photostream)

Six years ago, I was sitting in art class in high school. I had been tinkering with a sports blog for a few months, and I finally decided to bring it up. I turned to my best friend at the time and mentioned, casually, that I was thinking of starting a sports blog -- concealing that I had already started one. "Why the hell would you do that?" he asked. I shrugged, and that was basically the last time I ever brought it up with anyone outside my immediate family.

Six years later, that blog -- which has morphed into Inhistoric.com -- is going into shutdown mode. Yours truly will now write sports history articles for SBNation.com. I was delighted a few days ago when I learned my SBN profile page had at last been created. I mean, look at it! It's awesome! After six years as a starving artist (so to speak), I'm finally going to get to write for a truly legitimate website, amongst many other terrific writers, on an already established platform. My name will even appear in Google News whenever I write something; it's an absolutely awesome, awesome promotion. It's what I've wanted all along.

But with this promotion comes a bit of sad news, as Inhistoric will unfortunately cease to exist. I mean, I'm not really going far away or anything; you'll be able to find me when you press the "SB*Nation" logo in the top left corner of the screen. But Inhistoric will no longer be updated. It'll stay online as a ghost site, getting put in the proverbial attic if you will, along with other dead SBN sites like Trailing Tiger and Waggle Room which will keep it company. This is essentially the last post I'll ever make for Inhistoric; there are a few random articles I never got around to publishing for whatever random reason, and have recently been published for people to see for the first time. But yeah, this is it. And as happy as I am to join the big boys, Inhistoric has been my baby. For six years I've nurtured it, updated it. It has sentimental value to me, even though I was foaming at the mouth to abandon it at various points over the years. Still... I'm going to miss this place.

To anyone who followed Inhistoric, supported it, or even just passed by once or twice to read an article, thanks. Seriously, you helped in more ways than I can explain. Now onto the big show...

Okay, so I also wrote a 'lil wrap-up salvo on the history of the site. It's not Necessary Reading or anything, but I figured I might as well keep it in the post since I bothered to write it. If you get bored, it's your own damn fault. You've been warned!

Normally, I would consider a historical recap of a relatively unsuccessful blog as a schmaltzy and self-indulgent way to go out. And "normally" may apply here. Eh hell, of course it does. But I think it's also appropriate in a way, since for six years I've spent a tremendous amount of my free time scribbling about other people's pasts. Now I'm going to write about myself, specifically this site, because I want to. Why? Mehidunno.

The boring tale of Inhistoric, and my sports writing career, began in 2006, when I created "inhistoric.blogspot.com" out of sheer boredom. Deadspin had only just gotten popular, and sports blogs were popping up like weeds. I decided, as a sports enthusiast, to give it a shot too. After all, isn't it everyone's dream to be able to work from home, instead dealing with that one guy in the office who has Halitosis or B.O. and is the bane of your existence?

I decided to make it a sports history blog, because I had read that the best way to get ahead in blogging was to write about something distinctive, something that would set you apart. And no one was writing about 40-year-old basketball games, or 20-year-old trades. It helped too that I had always been somewhat enamored by history, and was a tad dismayed at how lamely most outlets covered it. Brainyhistory.com, for instance, would get craploads of traffic every day by just printing a one-line recap of something that happened on a specific date; example: "Phil Rizzuto Hall of Fame Night." I figured there'd actually be a market for a researched, in-depth look into historical sports events, that way people could actually learn more about things like Phil Rizzuto Hall of Fame Night, like why it happened, what happened, and what it meant, rather than just blankly stating: "Phil Rizzuto Hall of Fame Night," which I felt that anyone could do.

(Incidentally, I know nothing about Phil Rizzuto Hall of Fame Night. I assume it was amazing, or boring. One of the two.)

So, anyway, I started the blog. Next came getting it on a .com. But after failing to come up with a single decent sports-history name for a website that hadn't already been taken by squatters, I bought the domain to "Inhistoric.com," thinking that the words "in historic" were used occasionally together, and that if Kotaku could get away with essentially inventing a new word, so could I. It was a terrible mistake. Kids out there, if you're at all considering making a blog, don't use an invented name that will toil for its entire existence to get recognized by Google as a word. Don't be as stupid as I was. A good, simple name is hard to come by, but don't settle on something like Inhistoric. Use real words first, and then once you have a decent grasp of how to manage a blog and get a decent audience, maybe then get creative with a Kotaku spin-off name, like Destructoid or Japanator. Troy Nunes Is An Absolute Magician may be a long name, but it works!

Even though I created the blogspot in '06, it wasn't until late December 2007, after saving up many tedious articles to publish in chronological order for the "This Day in Sports History" section, that I actually started to manage it on a consistent basis. It's amazing how much time I wasted on that stupid blogspot template. Things that came pre-packaged in SB Nation's blog format would take literally weeks to jimmyrig on Blogger; getting the borders to align would take weeks; getting a decent design that wouldn't falter when one of the uploaded images randomly went missing was a never-ending nightmare. It seriously took me a whole month of editing in html to get it so that posts would jump to a next page -- I'd have to include all these hashtags at the beginning, middle and end of every single article in order to make it work.

It was hellishly tedious, and for all my work, for the effort and researching that went into the sports history articles, I was maybe getting 60 or 70 page views a day. I was very close to calling it quits when I randomly typed in "sports blogs" one day, probably searching for a directory to add Inhistoric to. SB Nation was the first thing that came up; at the time, SB Nation was just a link page to their vast collection of blogs. It's header was even "Sports Blog Nation," which I don't think the site calls itself at all anymore. I emailed the company, asked if I could join. One thing lead to another, and eventually I was given my own platform to roam with. (I believe Inhistoric was the 217th sports blog to join SBN, but don't hold me to that.)

Anyway, with SBN behind me, I went gung-ho in my effort to produce a comprehensive series recapping basically everything that happened on every day of the year, which is a daunting, never-ending task. And for the most part I did it. If you click on the 'Archives' button, and go to 2010, there's practically a whole consecutive year of "Today in Sports History" articles there. Inhistoric didn't quite take off though the way I had always hoped. I blame myself; choosing a nichey, specific topic allowed me to get onto the network in the first place, but that also made it very hard to find people who could write for it. It also didn't help that while the entire SB Nation platform seemed to be built around timely, up-to-the-minute fresh news, my blog was focused on stupid stuff from 30 years ago. At times, I felt like I was the janitor of SB Nation. I was in the building, but I wasn't exactly doing what everyone else was doing either. I never wrote a single Game Thread or Poll, and the Team Confidence chart never affected me either. Every article was basically manufactured straight from my head, and although history is never-ending, it was cumbersome after a while to try to find the one notable thing that happened on February 28th in history (which was Barry Bonds dressing up as Paula Abdul in 2006, in case you were interesting).

All of this is why this promotion is a great thing. I love Inhistoric, but for six years, I've been struggling to balance managing a website with getting myself out there with producing something for every single day. That struggle (hopefully) is going to go away now that I'm on SB Nation. I don't have to worry about maintaining a website, which is great because I'm terrible at it; I don't have to worry about establishing an online community that'll follow what I write on a daily basis. I can now, finally, just focus on producing historical-sports articles on a normal, timely basis, without having to deal with the minutiae that I don't know how to deal with/am terrible at. I have mad respect for all the managers of the SB Nation blogs. Those guys, the people running Black Shoe Diaries and Golden State of Mind and Liberty Ballers and Niners Nation and Athletics Nation and Purple Row, those guys are awesome. They were able to create whole self-sustaining communities purely from their writing ability, and that's something I was unable to do.

Hopefully I'll have better luck with this new format. I owe all the credit in the world to the people in charge at SB Nation, who I can't show enough love to for all the faith they've put in me. Hopefully it'll be to good effect. Good things are coming in the future, when I'll be writing about the past. It's weird, but it's going to work. :)

[You can keep up with me, David Pincus, at @misterpincus on Twitter, btw.]