This Week In Schadenfreude: The Hog Containment Field Has Been Shut Off

Share All sharing options for: This Week In Schadenfreude: The Hog Containment Field Has Been Shut Off

Hoo, boy, it's Arkansas time. They lost to Louisiana-Monroe in overtime. This was the equivalent of the EPA jerko turning off the containment unit in Ghostbusters. You may have already seen the crazy lady with the hat and the pig nose singing. I'm… not at all surprised. That is exactly what should happen after a loss to Louisiana-Monroe by Arkansas, and this is what should happen during it:

The giggling girls with the camera are brave, evil things. That guy: Scott Tenorman of the Week. If you want that in American Sign Language, they've got that too.

Arkansas fans have finally gone through the looking glass and started the antimatter version of a "Fire Coach X" site: bringbackbobby.com. It is a shirt store and petition with 53 signatures, and has been bookmarked by a JaketheSnake:

Not sure if serious. Also not sure about this:

they just pulled a poster off hogville, put a razorback shirt on him and made him headcoach.

That is in fact exactly what happened.

We have our first emoticon OCD of the year:

Where are all the JOHN L SMITH Diehards

They were everywhere saying he will be awesome, he was the greatest thing since sliced bread and now where are they? SILENT!!!! Come on and tell me how great he is... Please!!! Where are you all John L Smith as a Coach Fans... where are you

the only way it could get any worse is if they brought tusk out to the middel of the field and shot him in the head. 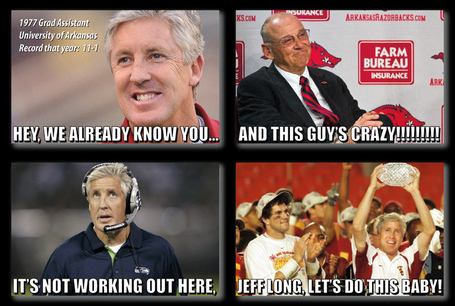 I'm with "the_kosher_pig": "Youtube video of these being sung or it's not official." Step your game up.

So it was bad. How bad was it? Here's a thread from August in which a poster complaints about his idiot sister-in-law getting married September 15th at 2 PM. That's Alabama. That's…

Wow, you just never realized at the time how lucky you really were.

…a hell of a break. Arkansas, you receive the Tears of Unfathomable Sadness.

Miami, Duke and North Carolina were the only losers, and two of those schools don't care at all. Neither does Miami, but some people pretend they do. Getting whacked 52-13 by Bill Gandalf Snyder brings out the facts:

In what was beyond a doubt one of the worst performances in the recent history of the Miami Hurricanes' football program the men from the Kansas State Wildcats completely humiliated the boys wearing orange and green by the score of 1,456 to 13.

Whenever I do this for Miami, there is always this guy:

The only defenders that will fly to the ball is denzel and deon without holding back everyone else waits and stalls and lets the defender dictate. Whyyyyy????? …

the d coordinator doesn't know what he is doing period. How does k state line up 5 wide and still run it. You KNOW THERE NOT THROWING IT!!!!!!

There is always another guy who is also this guy:

As soon as we get our azz kicked all these new people start popping up with a solution to fix the D. Funny as hell I tell ya. Everyone a damn defensive Guru. Man this is crazy, miss the old days without all this technology sh*t would get fixed with coaches behind closed doors with no pressure. Now with the media and fans coaches jump to make irrational decisions to keep the heat off. This is crazy I'll see you guys after G-tech. I'll be at the game. Hopefully we can redeem our selves. Nothing like that option to get the D going. It's All About The U !!!!!! Go Canes !!!!!

One day This Guy and This Other Guy will meet and have a Gangnam Style dance-off.

On the other hand, here's a SouthBrowardCane who may have a monocle:

So I try to be a pretty positive fellow, amigos. I tried to keep it all in perspective after the game Saturday. I said to myself, "We can still have a good year. I've seen worse. What's one 39-point loss on the road to a good team that just kicked our a--es up and down the field for four quarters like Jean Claude Van Damme working Tong Po over in Bloodsport?"

And then I looked at the schedule. Gents, unless we grow some assignment football-playing junkyard dogs up front defensively in a hurry, we are screwed....And I'm talking about the kind of screwed where it's last call at the bar, you're hammered out of your mind and suddenly that 40-something year-old divorcee mom named "Candy" in the f-me pumps and the magically skanklicious eyeshadow that is all messed up cause she's been crying into her Long Island iced tea, and who is a buscuit shy of 300 pounds is starting to look like Brooke Shields (You know you've been there).

This guy who is not This Guy or This Other Guy is Guy Who Needs A Tumblr.

in 3 years, Paul Chryst will be the head coach

At Central Madison Middle School.
He doesn't inspire, he doesn't discipline, he can't see that his starting QB has the football IQ of a tree stump, and his personality is so dull that he will never recruit well.

I weep for the past.

For pants' sake, Big Ten. For pants' sake. You are terrible. All of you. Iowa, Y U NO ever beat Iowa State? Y U hire GERG Davis? These questions can never be answered. They can only be laid out, like a corpse:

0: The number of touchdowns Iowa has scored in the red zone so far this year. (0 for 6.) Only three other teams have played two games this year and scored touchdowns on 0% of their red zone opportunities: Auburn, Vanderbilt, and UTEP.

1: The number of touchdowns Iowa has scored in two games (eight quarters) this season. Only two other teams have played two games this year and scored only one touchdown, Idaho and UMass.

3.8: The average yards per play for Iowa through two games this season, good for 120th (out of 124 teams) in college football.

3.9: The average yards per carry of Damon Bullock through two games this season.

4.9: The average yards per pass attempt for James Vandenberg through two games this season, 119th in college football.

Great googly moogly. How are you taking that, Iowa fans?

Reading about the godawfulness and seeing how bad it really makes it ten times worse.

Spencer Hall’s column about your team as a drug, listing Iowa as autoerotic asphyxiation (no, not tried or trying, just imagining now) is what came to mind yesterday.

There's actually a lot of "we can still do this," to be fair. The front page of BHGP is probably more venomous than those comments, what with the corpse-display above and a slew of Onion-esque articles about what Kirk Ferentz is doing with his empty trophy case and various other things.

During the game there was not much "we can still do this" unless "this" is "felony assault":

Note to self: when neighbors ask you not to cuss so loud inside your house; don't tell them to shut up or you will stab them in the throat. They don't like it.

They shut up, though. I bet a dollar.

[ed: KOK = former Iowa OC Ken O'Keefe, notorious for having all the flair of a low-sodium saltine.]

Also I could have used this last week:

But I want you to know I love all of you.

Thanks, guy without pants. Thanks.

Moving on! To Wisconsin, which is not moving on. On Wisconsin turned into No Wisconsin as the Badgers racked up just over 200 yards of offense against a team that was 3-9 last year. By Monday, Wisconsin had replaced their SEC-decorated offensive line coach with a grad assistant and Bret Bielema was proclaiming he "lives in reality" unlike people who think that may have been a slightly panicked move.

As a bonus, the Badgers' new offensive coordinator is named "Matt Canada," which leads to delightful thread titles like …

…even though all criticisms of Canada are right on the money.

Badger fans generally love Bielema—that whole multiple Rose Bowls thing helps—and are on board with telling this interloper to GTFO. Some of them are North Koreans swimming in cheese curds by now:

This is great news. This is far better news than a W would have been yesterday, seriously.

Except that in the event of a win you probably wouldn't have to fire the oh why am I explaining this I don't know.

Great Leader will save us.

The Maturation of BB

I honestly hope this thread will not be co-mingled! BB was absolutely awesome in that presser.....and...yes...I listened to all 35 minutes. From a guy who has debated with "Punky Brewster", about the merits of going for 2, in a blowout...this guy has risen to a new level.

He easily could have let this $hit percolate, and thrown the new staff under the bus, at seasons' end...however...he stuck his neck out, took responsibility, and will attempt to save a season that started with high expectations!

Can't anyone in this state be mad? Hmm.

If this team can win the Big Ten, I can beat Mittens and Obummer as a write-in candidate.

#BoyMeetsWorld is the perfect antidote to a miserable weekend of football. @packers #Badgers

I'm telling you, Wisconsin is North Korea. They just got the last season of The Golden Girls up there.

Related: Spencer Hall's The Alphabetical and Bill Connelly's The Numerical

Kansas lost to Rice. When Michigan played Rice a decade ago they integrated e^x on the field, and later declared it was because they wanted to spell "sex" in front of 110,000 people. Was this the band or the team, you ask? I don't know.

Anyway, those guys beat Kansas, which spawned the most boggling comment in the history of the internet:

Crist is sort of our sacrificial lamb

The guy didn't even mean it like that. Whoah. /keanu'd

This thread devolves into a discussion of the mobility of armadillos after Crist is compared unfavorably to one.

appyhawk: I take it you guys haven't spent much time watching armadillos. Those little rascals can jump like a fox and run like a rat terrier. They don't very often, but they can.

Mulder07: I've only seen the aftermath of an armadillo after it has been struck by a Michelin tire. If they are as wily as a fox and quick as a rat terrier, please tell me why our southern highways are littered with armadillo blood bags?....

Pbbut: I'm with you Mulder07. I've come to believe they are born by the highway with their legs in the air.

And thus was Kansas football discussion brought to a height unseen. Also, some guy in that thread says "coaches shouldn't be super geniuses," which is exactly the right thing to say about Charlie Weis. I declare this thread the best thread.

I don't even know if I spelled those words correctly and frankly I don't care.

What are the odds there? If you were presented with the second sentence, told "embarrassing" and "humiliating" were the words in question and that this had been lifted from a football message board, what would Vegas have made the money line? Anyone betting on Spelled Correctly would be out yacht shopping.

When we went to Oklahoma under Ty..

This also gets filed under Fictional Bets With Astronomical Odds:

NUMBER ONE PROBLEM WITH THIS TEAM RIGHT NOW!!!!!

These Are Sark's Recruits And Don't Ever Forget It

Sark's report card for Recruiting the Offensive and Defensive Lines and Linebackers over the past 4 years is now available for viewing.
REPORT CARD OVERALL ASSESSMENT: GRADE IS " F "

Colorado lost to Sacramento State, but that's just what happens.

Missouri? They not s'posed to be SEC. Now they are. How's that going for them? 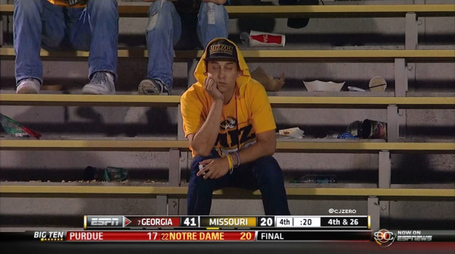