Share All sharing options for: K.C. Chiefs To Fan: 'Get A Clue'

Via Reddit, the Kansas City Chiefs were recently involved in a surprising-but-not-really-that-surprising social media faux pas, as they told a longtime fan to "get a clue" over Twitter. That's ... I'm not sure exactly what the "best practice" for fan engagement is when you're a football team, but it's probably not that.

It began when a fan sent out this Tweet, which included a mention of the team.

I'm not much of a @kcchiefs fan anymore. Clark Hunt's yearly 30m under the cap bullshit is unethical. Greedy bastard owners can F.O. cc @nfl

A short time later, that fan received this DM from the official Chiefs Twitter feed. 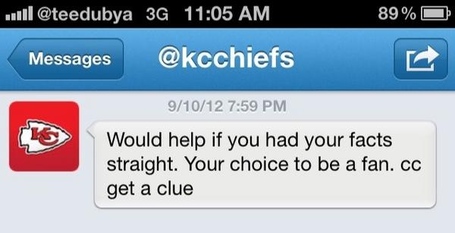 Oh dang dog he told you to carbon copy getting a clue dog oh daaaaannnnggggg. You just got sonned by a whole NFL team kid oh daaaannnnggggg.

For all news and information regarding the Kansas City Chiefs, please visit Arrowhead Pride or stop by SB Nation Kansas City.