Grab Some Butts? Tony Stewart Gets A Piece Of DeLana Harvick

Share All sharing options for: Grab Some Butts? Tony Stewart Gets A Piece Of DeLana Harvick

At the beach, parents teach children to never turn their backs on the ocean. After all, you never know when a big wave is going come up and wipe out someone from behind.

At NASCAR tracks, parents should probably teach their children something similar about turning their backs on Tony Stewart.

Stewart is a master of ass-grabbing – both male and female asses – and has squeezed more butts in his career than presidents have kissed babies.

His latest victim (a repeat victim at that) was DeLana Harvick, who was at Chicagoland Speedway to support husband Kevin Harvick on Sunday.

This one happened to be caught on national TV.

As you can see in the background, Kevin Harvick – a prankster himself – seemed to think it was funny. And DeLana tweeted a new hashtag for Stewart several times during the race: #sneakyassgrabber.

Anyway, the whole thing was a case of no harm, no foul.

Stewart's butt-squeezes are hard to document, almost as difficult as capturing Sasquatch on film (and in some ways, that's an appropriate example).

Here's what happened when ESPN's Marty Smith had his back turned to Stewart in April at Martinsville: 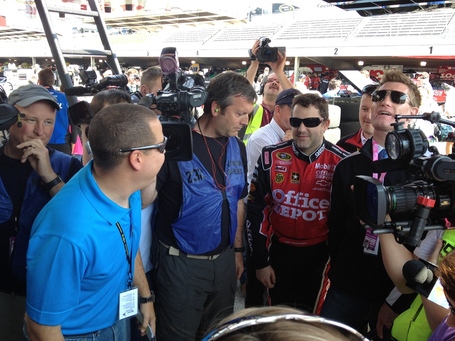 Kids, the lesson here is this: If you're within a mile of Stewart, make sure to grow eyes in the back of your head (or butt, for that matter).