A 'Wilson' Meme Has Begun In Seattle

Share All sharing options for: A 'Wilson' Meme Has Begun In Seattle

At the beginning of the Monday Night Football matchup between the Green Bay Packers and the Seattle Seahawks, a shot of the crowd revealed a new meme that we're really, really, REALLY hoping doesn't catch on. You see, the quarterback for the Seahawks is named Russell Wilson and ... well ... 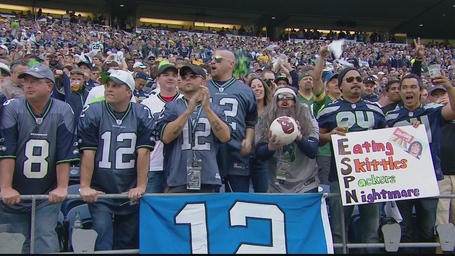 Oh yes, right. Because it's the same surname as the beloved volleyball from that film. Sure. Kind of forced, so it shouldn't really --

Stop that at once. Stop it. No. Bad meme.

Ugh, this guy half-assed it and couldn't even bring himself to cut open the ball to make the hair. This is awful on several levels.