NBA Festivus: Does anyone care about the Knicks?

The Knicks had a very exciting 2011-12 season, thanks to Jeremy Lin. Welp.

Share All sharing options for: NBA Festivus: Does anyone care about the Knicks?

Led by Carmelo Anthony, Tyson Chandler and a man named Lin, the New York Knicks powered back to national relevance in 2011-12. Now Lin is gone and ... well, things look pretty stick once again. Such is life at Madison Square Garden. Let's Festivus.

Against all odds, the Knicks ended up with an elite defense in 2011-12. With Tyson Chandler manning the post and Mike Woodson taking over for the final 24 games, New York finished No. 5 in the league in defensive efficiency. The season prior, they were a soft No. 22. Chandler won Defensive Player of the Year, and it's hard to argue with his impact at the team level. But did the Woody Ascension make just as big an impact? Here, we look at the cumulative rolling defensive efficiency for the team over the course of the season. For most teams, things are erratic at the beginning as "normal" sets in, and lines smooth out as more data is added. But few teams improve like this as the season rolls along. 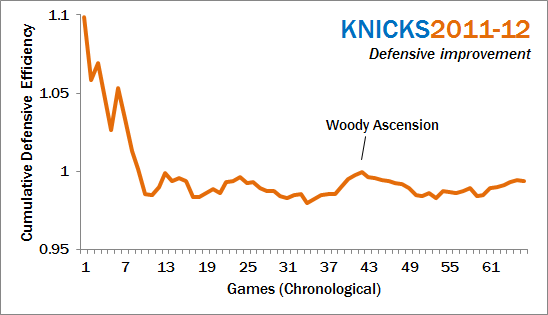 By the time Woody tagged in, the Knicks' defense was imploding. That immediately corrected with a string of brilliant defensive nights, and it didn't let up until the final five games. What goes unnoticed is that the Knicks defense was actually pretty good under D'Antoni last season. Woodson either rescued it (if you consider the late February/early March problems an implosion) or improved it (if you think that bad spell that led to D'Antoni's canning was reversion to expectation under Mike D.).

The defense should continue to be excellent so long as Chandler remains healthy and 'Melo continues to play his tail off for Woodson. The difference between Anthony's defense effort under D'Antoni and Anthony's defense effort under Woodson would have been hilarious if it weren't so maddening. We'll see what kind of staying power Woody has in Melo's ear.

Unfortunately, the offense was not so powerful. But we'll get into that when we air our grievances.

One thing that the Knicks do really well on offense is draw fouls; New York finished No. 7 in the NBA in that category, and should remain high thanks to Carmelo Anthony and, if he has recovered, Amar'e Stoudemire. But the loss of Jeremy Lin will hurt here. The point guard drew five free throws per game while taking only 11 shots a night last season. That's a high rate of return. Raymond Felton's career average for free throws per game is three. It'll be up to 'Melo and Amar'e to keep up the free throw rate.

ZILLER: Do the Knicks matter?

And it's going to be up to 'Melo and Amar'e to score, because, man it was not a good offseason on that count. The Knicks lost Lin, a moderately efficient and high-usage contributor who was an excellent playmaker. It only exacerbated matters that they replaced him with Felton (low efficiency, moderate usage), Jason Kidd (super low usage) and Pablo Prigioni (a swell dude ... who is a 35-year-old rookie). There will be quite a few possessions left over from Lin's absence, and there's no way on Earth you want Felton touching them. He's inefficient enough already. So they'll likely go to 'Melo and Amar'e, unless we're failing to see a magical Felton-to-Chandler connection that never materialized when the two played together in Charlotte.

In theory, J.R. Smith, Steve Novak and (after recovery) Iman Shumpert could help out more on offense. But Smith's usage rate was about as high as it'll get (22 percent) last season, and he's quite inefficient at that level. Novak was thankfully retained, but he's eternally a low-usage player and best suited as a designated shooter. (Despite Novak's incredible shooting in 2011-12, the Knicks finished No. 23 in three-point percentage.) Shumpert won't be back for the first month of the season, and is a relative low- to moderate-usage point guard regardless.

So ... chances are that the offense will again be no great shakes. It appears to be predicated on a very high usage, low efficiency star ('Melo) and a high usage, middle efficiency star (Amar'e), the latter of which seems frequently to get pushed out of the picture. It's a bad mix, and Woodson has a huge task to organize something decent on this end.

The New York Post doesn't give us 10 more Lin puns by the time the season ends. #neverforget

There isn't the annual debate over whether or not Carmelo Anthony is a top-10 player by Christmas.

Amar'e Stoudemire earns out half of his annual salary.

Fans and/or columnists don't hail the return of Iman Shumpert as a near Jesus Back To Earth moment.

Anyone longs for the Mike Bibby-Baron Davis-Toney Douglas era. (I mean, Felton-Kidd-Prigioni ain't that bad.)