Larry Fitzgerald describes how the West is being won

The unbeaten Arizona Cardinals are the biggest surprise in the NFL. Larry Fitzgerald talks with SB Nation about Arizona's success and the rebirth of the NFC West.

Share All sharing options for: Larry Fitzgerald describes how the West is being won

The NFC West. For years, it was easily, and rightfully derided as a sinkhole for good football, the WAC of the NFL. It wasn't all that long ago that the division sent a team to the playoffs, the 2010 Seattle Seahawks, with a losing record. But things are changing out West.

Three of the division's four teams have a winning record, knocking off more well-regarded opponents through the season's first three weeks. Even the St. Louis Rams, the only team in the division at 1-2, fought their opponents into the fourth quarter. The real surprise is the Arizona Cardinals, one of four teams in the entire league still owning a spotless record.

More: Fitzgerald on refs, 'integrity of the game' | NFL picks for Week 4

A perfect record is no fluke to Larry Fitzgerald and his teammates, in spite of the fact that this was the guy who advised fantasy football players to draft Calvin Johnson ahead of him.

"I wouldn't say surprised," Fitzgerald said in an interview with SB Nation. "This is what we work for. This is why we put in the time and dedication to perfecting our craft, every person at every position."

There was no celebration in the wide receiver's voice when talking about the unlikely leaders in a surprising division.

"It's still very early in the season," he said. "We're far, far away from our ultimate goal, and we want to stay the course and put ourselves in position to reach it." 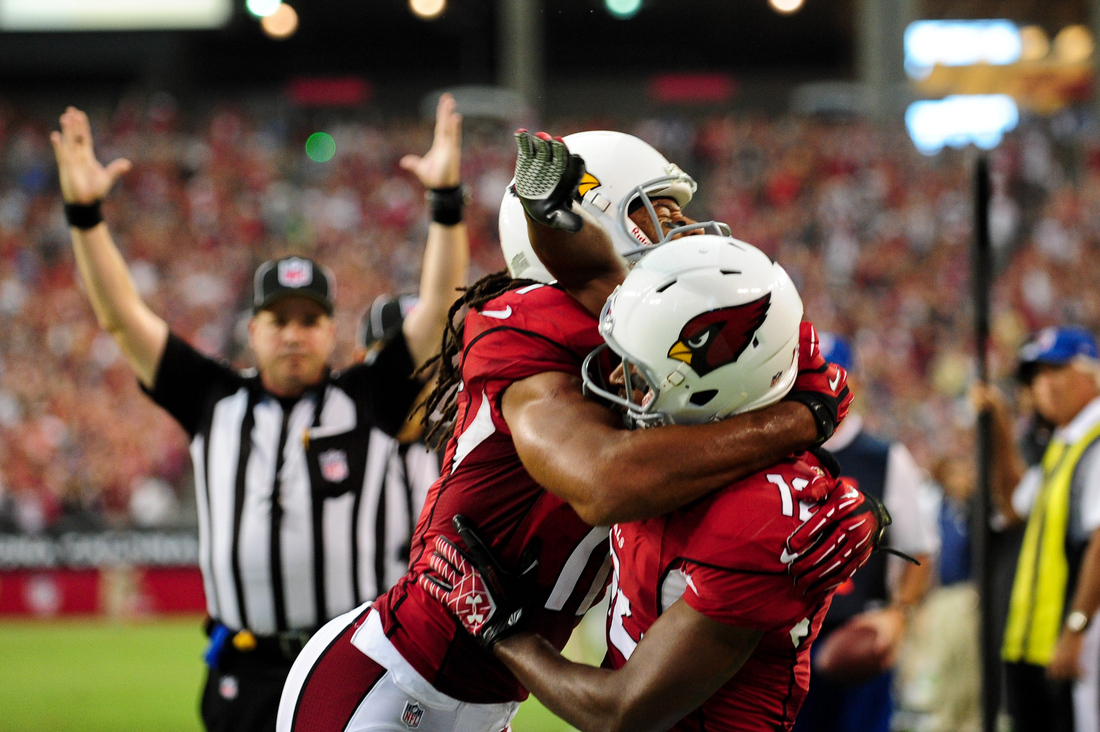 Fitzgerald spent Tuesday in Los Angeles, pushing the Jersey Report for Dick's Sporting Goods, "the only place where fans can get real time information on jersey sales and see how their favorite players are doing against other players," Fitzgerald reminded me. Peyton Manning and Andrew Luck the lead the list.

"Quarterbacks dominate sales," he said. "They're the big names, the faces of the franchise. It's hard for a skill guy to get in there. I'm working hard. I'm trying to play as well as I can. So maybe I can crack that top ten."

A preference for passers aside, Fitzgerald will probably be on the jersey sales list before his quarterback is. The main reason it was so easy to write off the Cardinals on the first of September is because they spent the summer trying to decide between John Skelton and Kevin Kolb.

Proficiency was the best-case scenario for most of the quarterbacks in the NFC West prior to the start of the season. Alex Smith, a former first overall pick largely written off until last year, was considered the best of the bunch. Seattle had a third-round rookie, Russell Wilson, who stood 5'10. The St. Louis Rams matched Sam Bradford with his third offense in three years.

Safe to say, none of those guys were inspiring much in the way of jersey sales.

Three weeks into the season, the numbers don't match up with the predictions for any of those signal-callers.

The quarterback issue in Arizona is long gone, as far as Fitzgerald is concerned. It never really was much of an issue, to hear him talk about it.

"We were in a unique situation where we had two quarterbacks that we're confident we can win with," he said. "Whoever's playing quarterback for us, we believe in his ability and we're going to follow his lead, just ride his coattail."

As for Kolb, "he's a wonderful teammate," Fitzgerald said.

"It's always been tough defensively," Fitzgerald said of the NFC West. "I know that, I play all these teams twice a year. It's never an easy matchup, especially with all the talent that these teams possess. This is nothing new to me, playing against Seattle, San Francisco and St. Louis was always tough."

Just how good are the defenses in the NFC West? Take a look at each team's performance using the Defense-adjusted Value Over Average (DVOA) metric from Football Outsiders (remember, negative numbers are better for defenses):

San Francisco is arguably the most disappointing of the bunch. Seattle is allowing just 13 points per game, the best in the NFL. Arizona is second, and asterisk-free, with 13.3 points allowed per game. The Rams are thriving on a stingy pass defense that has allowed only two passing touchdowns.

"They're just playing tough, hard-nosed football," Fitzgerald explained when asked about the defenses in his division. "They tackle well, they challenge you, they're in your face, they get after the quarterback, they cause turnovers."

It requires the offenses to be at their sharpest.

"You have to be able to play smart football," the Cardinals receiver said. "Take what they give you and do not make mistakes and turn the football over. You won't get many opportunities to score." 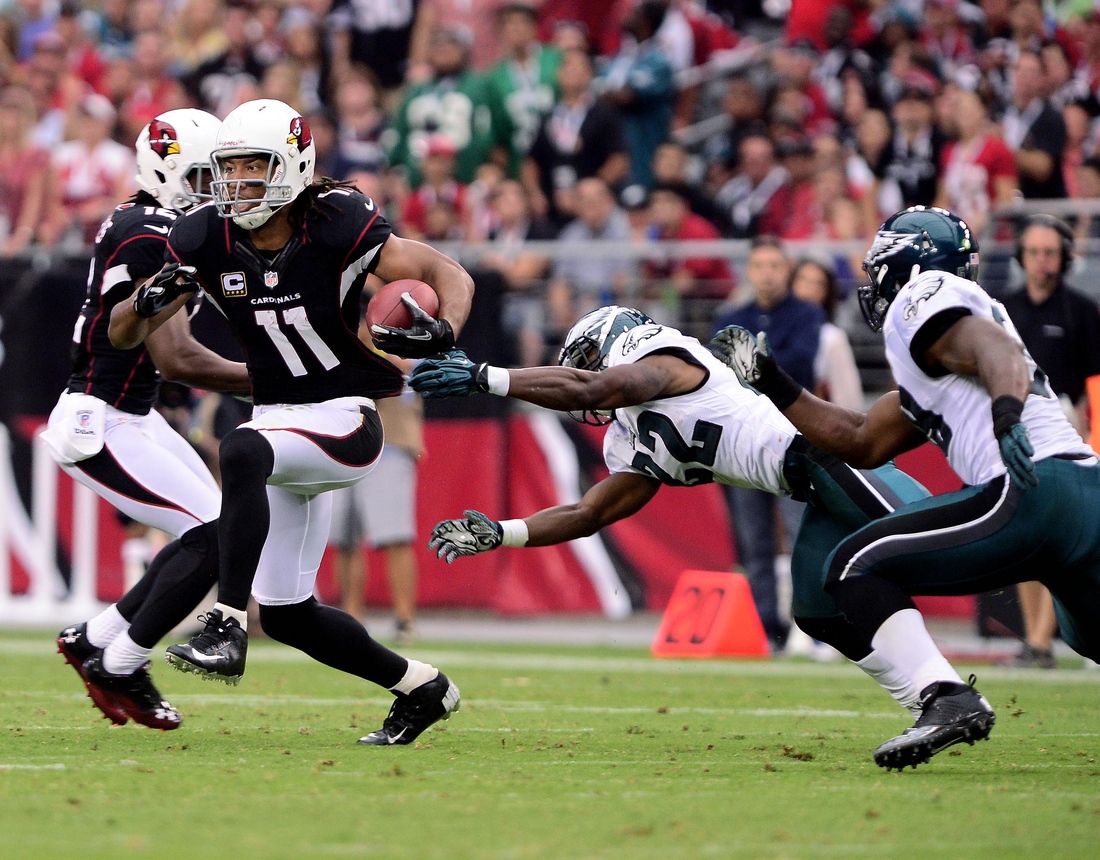 Miracle or mirage in Arizona?

There were signs of a turnaround for the Cardinals last season. They finished the season 6-2, picking up wins against the Eagles and the 49ers along the way. Questions at quarterback and along the offensive line overshadowed the Cardinals' late-season turnaround.

"We finished really strong last year," Fitzgerald said. "Obviously, we had a tough stretch of games early on last year. We found some rhythm and good momentum down the stretch and we were able to carry that into this year."

Much of the improvement rests with the defense. Arizona finished last season having allowed an average of 21.8 points per game, solidly middle of the pack. That number declined to 19 points per game over the second half of the season, during which the Cardinals never allowed an opponent to score more than 23 points. Through their first eight games of the 2011 season, they surrendered almost 25 points per game.

"Our defense is playing very, very good football," Fitzgerald remarked. "You know, we got a lot of guys over there making plays for us."

The offense has improved too, from an average of 19.5 points per game to 22.3, but there is plenty of room for improvement.

"Offensively, we're doing a lot, but we have to improve on that side of the football," the star wideout acknowledged.

Fitzgerald's Cardinals are working on the offense at the moment, focusing on improvement rather than basking in the franchise's first 3-0 record since 1974.

"Keep your head down, and keep working," is how Fitzgerald described head coach Ken Whisenhunt's message to the team. "There's a lot of things that are going to be said, positive and negative, but we can't control that. The only thing we can control is our effort. We're going to continue to pull each other, push each other and get the best out of each other."