Toronto made a few key additions, but the health and progress of two longtime Raptors may matter just as much. The Hook previews the pride of Ontario.

This is the season in which we find out so much about the Toronto Raptors. We find out if Andrea Bargnani is worth the trouble (and cost). We find out if DeMar DeRozan is going to be an above-average NBA player. We find out if Bryan Colangelo's long, slow rebuild of the franchise is working. We find out if it was worth setting last season on fire to wait for Jonas Valanciunas. We find out if Dwane Casey and Kyle Lowry can mash up their rough-and-tough-as-leather styles with the quasi-European team's sensibilities to produce a good team.

Last season, Casey (a former Timberwolves head coach and Rick Carlisle assistant) did the unthinkable: he turned the Raptors into a decent defensive club. Check out this chart showing the team's defensive efficiency compared to league average since 2005-06. 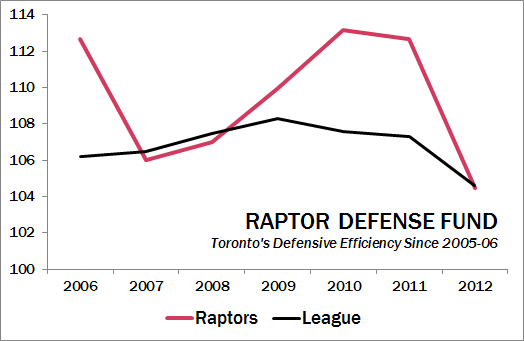 Sam Mitchell ran the show until early in the 2008-09 season; Jay Triano took over until the start of 2011-12. No, the Jay Triano years were not good defensive seasons. But justlikethat, Casey reversed course. In fact, the Toronto offense was pretty good under Triano ... and slipped all the way to No. 29 under Casey. (We'll talk about the offense below.)

Casey emphasized a few things with the Raptors, and they paid off. His players were told to challenge every shot, and Toronto ended up No. 5 in shot defense. Toronto was made to give up fast break opportunities in order to secure more rebounds -- an old Spurs strategy -- and it worked on defense: the Raptors were No. 3 in defensive rebounding despite a relatively unimposing frontcourt. (Andrea Bargnani, who admittedly missed half of the season, is among the worst rebounding 7-footers ever. And they still got it done.)

Guess what? The defense should get even better this season. The team swung a trade for Kyle Lowry, who might trail only Rajon Rondo among point guard defenders in the league. That he will replace Jose Calderon, a walking sieve, in the starting lineup is an added bonus. In particular, Lowry forces pick-and-roll point guards into tough situations, and is a decent (if not good) ball hawk. That should help Toronto's No. 26-ranked turnover creation.

The other addition that looms largely is that of Jonas Valanciunas. If the Olympics were any indication, it's going to take some time for the 2011 lottery pick to adjust to the speed of the game at the highest level. But he's a very tall man, and those tend to help on defense (Bargnani excepted). How well Casey and his staff teach and use Jonas early on might dictate whether Toronto can become a truly excellent defense squad instead of a slightly better than average one. The same applies to rookie Terrence Ross on a smaller scale: if he gets playing time, he could also help Toronto's mediocre wing defense. But it'll take adjustment, training and time.

PRADA: How good is Lowry?

RAPTORS HQ: A solid Plan B

Now, about that offense. It just blew up over the last two seasons, despite a roster that looks like it skews offensive (honestly, part of that perceived skew is because Calderon and Bargnani, two major pieces of the roster, are so bad defensively). The Raptors were No. 22 in shooting, No. 26 in turnover rate and No. 22 in offensive rebounding. That offensive rebounding figure will depend on Valanciunas, in addition to improvement or minutes for Amir Johnson and Ed Davis. The turnover rate isn't likely to change a whole lot: rookie big men are give-away machines, and Lowry has gotten looser with the ball in recent years as his profile has grown. But the shooting? That has to get better. And it can.

Lowry is a pretty efficient shooter, and he's had a decent three-point shot in recent years. He'll help. DeRozan is finding his groove. He looks like a long-term third scoring option, which will make him work well on this team behind Lowry and ... Bargnani, Toronto's Rosetta Stone on offense.

There was visible evidence of this last season. According to 82games.com, the Raptors were five points per 100 possessions better on offense when Bargnani was on the court. (Of course, the team was 3 points worse on defense. But I digress.) Just getting a healthy Bargnani back in action -- he played just 1,000 minutes in '11-12 -- will help a good bit. Getting him to congeal with Lowry will pay major dividends. Keep in mind also that Bargnani was injured enough last season that he underperformed; in particular, his three-point shooting plummeted to below 30 percent. That's not reasonable: we know Bargs is a much better shooter than that, as evidenced by his career 36.5 percent conversion rate.

Jonas Valanciunas does not commit some mistakes that makes Dwane Casey smack his own forehead within the first two days of training camp.

Kyle Lowry is totally pleased with his role all season long.

Andrea Bargnani lands an All-Defense vote (even satirical, because that s--t isn't even funny).

DeMar DeRozan settles quietly into a 12-year career as an 18-ppg scorer without lots of people complaining that he didn't become Kobe.

Anyone remembers to boo Chris Bosh this year.

Anyone congratulates Chris Bosh on his NBA championship.

Landry Fields is the difference.