Deep Shooting Is Even More Important Than You Think

In the ever-evolving NBA, a team's propensity to take three-pointers is of astounding importance.

Share All sharing options for: Deep Shooting Is Even More Important Than You Think

For so long in the NBA, controlling the paint meant controlling the game. Dominant centers ruled the roost. We know that's no longer the case. Not only has there been a shortage of good centers over the past decade or so, the game has changed as the three-point shot has become more and more popular. Not even centers, let alone entire teams, focus on getting only the easiest shots: everyone has stretched their game away from the rim.

That shows up in a quick study of how shot ranges correlated with shooting efficiency last season. The excellent Hoopdata.com has a stat called expected effective field goal percentage. As a whole the league shoots better on shots at the rim than anywhere, and by virtue of being worth three points, three-pointers result in higher effective field goal percentage than two-pointers. Expected eFG takes each team's shot profile -- the share of its shots the team takes at close range, mid-range, etc. -- and estimates the team's eFG had it shot league average at each range. This gives you a number for which to compare teams' shot selection based on range.

Expected eFG (XeFG) is then the weighted sum of that shot profile using Denver's actual shot profile and the league average conversion rates. (For the Nuggets, it comes out to 51.7 percent, tops in the league.) Using XeFG, we can compare and grade shot selection as it pertains to range: Denver, for instance, has a really smart shot profile. It takes most of its shots at the rim (the most efficient place on the court) and beyond the arc (the second most efficient place on the court), and minimizes the least efficient ranges (everything in between).

But as we'll see in the chart below, shot profiles aren't everything. Plenty of teams actually shot well with bad profiles, and a few teams even shot poorly with strong profiles. 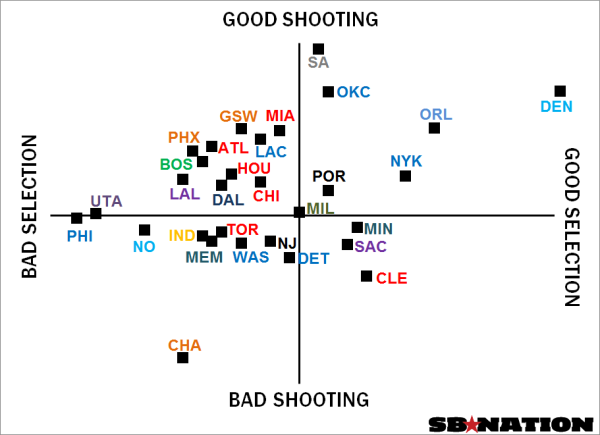 This is a standard quadrant map. Our XeFG is on the x axis, with better figures to the right. Actual eFG is on the y axis, with better numbers toward the top. Teams landing in the top right quadrant had good shot profiles by range and good shooting performance. In the bottom right, these teams had good shot profiles but poor actual shooting. In the top left: bad range profiles, good shooting performance. Bottom left: below average XeFG and eFG. (Notice Charlotte. Man, the Bobcats were bad. News at 11.)

You may notice a positive linear relationship here, which is to say that XeFG and eFG do have a relationship: teams with better XeFGs are likely to have better eFGs. The correlation coefficient is actually 0.34, which is non-negligible. Assuming a linear relationship, it indicates that about 11 percent of a team's shooting performance is explained by at what range they take their shots.

But when you break it down further, it becomes apparent what really matters.

If you look at the correlation between shot rate at each of Hoopdata's specific ranges, we'll see that the two efficient zones are not created equal. The percentage of a team's field goals taken at the rim has a small positive (0.06) correlation with actual eFG. That's essentially negligible. But the percentage of a team's field goals taken from beyond the arc has a 0.48 correlation coefficient with eFG. Assuming a linear relationship, that indicates that about 23 percent of a team's actual shooting percentage is explained solely by how frequently the team takes three-pointers.

Three-pointers rule the land. It's also worth nothing the biggest problem with long-two pointers: that they are not three-pointers. The share of FGAs taken as long two-pointers has a -0.44 relationship with actual eFG. Shot shares at the two other inefficient ranges -- short and mid -- also have negative relationships with actual eFG, but with much, much smaller correlation coefficients. Why are long two-pointers such a problem? Check out the correlation between rate of long twos and rate of threes: -0.57. In other words, very few teams take lots of long twos and lots of three-pointers. So every long two is basically a three-pointer not taken. And three-pointers are important.

You'd need to run a regression analysis on free agent contracts to be sure, but I'd venture to say that if there's a current market inefficiency in the NBA, it'd be that shooters aren't valued highly enough. Where's Travis Diener when you need him?