Bombs Away: Judging NBA Teams' Promiscuity From Beyond The Arc

Stan Van Gundy is the king of all three-point shooting teams. Never forget that. But who will now pick up the mantle?

Share All sharing options for: Bombs Away: Judging NBA Teams' Promiscuity From Beyond The Arc

On Monday, we looked at how shot ranges figure into a team's shooting performance, and found that a team's rate of three-point attempts says a lot about how a team shoots overall. Obviously, three-pointers are hugely important in today's NBA. But it strikes me that we don't pay a whole lot of attention to the subject other than to note the good individual shooters (and the bad ones).

The one exception has been the recent Orlando Magic teams, as Stan Van Gundy has run his own brand of three-heavy offense that almost looks revolutionary at times. With Dwight Howard anchoring the middle and drawing double- and triple-teams, Van Gundy loaded the floor with shooters and waved green flags in their faces. The result has been incredible: the Magic took almost 50 percent more threes overall than the average NBA team last season. And this was a number of years into Van Gundy's experiment, with other teams joining the party and firing away from downtown.

But there are two independent elements of three-point shooting: how many you take (relative to your overall field goal attempts), and how well you shoot them. That's what this map seeks to show. 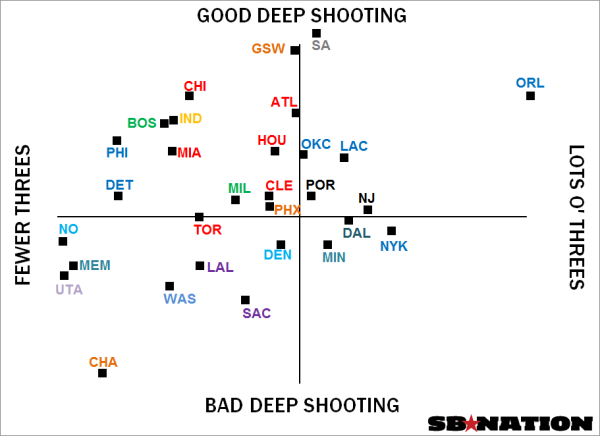 Three-point attempt frequency is situated along the x axis and three-point shooting percentage is along the y axis. So in the top right quadrant, you have the teams that shoot lots of threes well. The bottom right has teams who shoot lots of threes, but convert at a less-than-average rate. (The axes are league average.) The top left represents teams who shoot fewer threes than average, but do so at a higher percentage. The bottom left has teams that shoot fewer threes and do so poorly. Once again, Charlotte was completely disastrous.

You'll notice a fair linear relationship there: there's an invisible line running from bottom left to top right. There is a medium-strength correlation between rate of threes and three-point percentage (0.36), which indicates that teams without good three-point shooters tend to take fewer threes. (It could also indicate that teams with the green light have more confidence and as a result make more, but that's something we can't prove with what we have here.)

What are some of the takeaways from this map?

* The loss of Ray Allen in Boston is going to put lots of pressure on his replacement, Jason Terry. Allen took about 23 percent of Boston's three-pointers last season, second on the team behind Paul Pierce (27 percent). Ray took better than five threes per 36 minutes played. JET has taken 6.6 per 36 twice in his career, and has an average of 4.9. The Celtics will need those this season, as they were already fairly low on the frequency with the greatest shooter of all-time.

* In related news, you'd expect Miami to move up on the shooting percentage ladder. Adding the greatest shooter of all-time will help in this category and only in this category.

* I think the map shows just how ridiculously progressive on the whole three-pointer thing Van Gundy has been. He's unemployed, by the way. #FreeSVG

* I find it fascinating that the Nos. 2-4 teams (Knicks, Nets and Mavericks) in terms of frequency were all roughly average shooting squads. I think that says something good about the teams: they weren't shooting lights out, but they remained committed to the threeball. The Knicks were coached by Mike D'Antoni much of the season, so duh. The Nets had Deron Williams and Anthony Morrow combining for nearly 11 attempts a game themselves. (Williams only shot 33 percent on threes last season.) The Mavericks remained committed to stretching the floor for Dirk Nowitzki, with Terry and Jason Kidd doing most of the lifting.

* Memphis finally has company. I haven't done the math to see whether the Grizzlies had been all alone in 2010-11 as an anti-three team, but it's nice to see New Orleans and Utah have joined them. Memphis really is the opposite of Orlando in terms of three-point shooting: Lionel Hollins plays his best defenders the most, and only O.J. Mayo (now a Maverick) has been a frequent gunner. Either Rudy Gay is going to have to up his barrage, or Memphis is going to be more anti-three than usual this season.