This Week In Schadenfreude: Michigan Throws Itself In The Wood Chipper

Your author turns into @horse_ebooks. Pitt fans want a new coach (seriously). Minnesota fans get kicked out of BW3's, and the greatest thing Kentucky football has ever done. Follow @SBNationCFB

Share All sharing options for: This Week In Schadenfreude: Michigan Throws Itself In The Wood Chipper

[Hi. If you don't remember or are new, this is a recap of the funniest, worst, most-bizarre things said on the internet by college football fans over the weekend. Your author also runs MGoBlog and is a diehard Michigan guy.]

I could probably do this entire column just on Michigan after they took a 41-14 thrashing from Alabama and lost starting corner Blake Countess for the year with an ACL tear. Before we get to the Countess thing, we have to deal with something else: me.

This column consists of me trawling the internet for the angriest, saddest, least sane things available about college football (and Washington fans referencing Ty Willingham). On some level it's about making fun of the unhinged, but more than that I'm just relieved that I'm not alone. TWIS is about laughing at your rivals, thanking the football gods that they have spared us this week, commiserating when they haven't, and finding Washington fans comparing their current coaching staff to Ty Willingham.

Since I am the sort of person who features in TWIS, I have to give it to myself just as hard as that guy on the Dawgpound typing "SARK = TY!!!!" So… yeah, I started drinking during the game because obviously, and then I started tweeting because it was gallows humor time, and things got a little out of control.

Michigan's athletic director, a marketing droid from the bowels of MBA hell, likes to say this is what he delivers.

yeah, let's run Vincent Smith from the I.

This is retarded. Borges is asking Denard to throw into NFL windows.

Descending now with fairly standard offensive bitching. Our beat guy Heiko asks me if I'm drunk; he has no idea.

at what point can i stop watching this?

31-0 now. I do not actually stop watching this.

First called run of the night for Denard.

@JayRodddddd A NOOSE IS A ROPE

@zucko WE ARE THE WEAK

At halftime things go downhill, and I turn into horse_ebooks.

Still not a fan of athletic director.

I stand by this one.

IE commercial or something? I don't even know.

i just started laughing like Walter White in that one episode of Breaking Bad.

someone photoshop my head on this http://www.youtube.com/watch?v=gzpkPy7H700 …

QB runs just make me mad now. THAT IS THE SADDEST THING THAT HAS EVER BEEN

Denard is on the ground, holding his back.

thanks for the seventh-worst four hours of my life, Dave Brandon.

Right, horse_ebooks. That was the end of the game, which is good. Obviously. Scott Tenorman of the Week: your author.

If you're ever in need of agonized gifs, that's your thread. I declare Shatner the winner:

Michigan, you receive the Tears of Unfathomable Sadness even though this is kind of what everybody expected going in. Well done, us.

N.C. State got blitzed by the Bray-Bray, and they're taking it hard:

Volmageddon – Why It’s So Emotionally Devastating

After a full night’s sleep…it doesn’t feel one bit better. Last night was an unmitigated disaster. The opportunity the game presented (to make a statement on the national stage) will not be repeated. Even if we win the ACC – admittedly a laughable notion right now – we will just be the new sacrificial lamb put up for January slaughter. A feeble reminder of why the college football world can’t wait to be rid of the BCS.

Ouch. Meanwhile, Tennessee fans are thinking "we did this to someone else?"

Maryland beat William & Mary 7-6. Also they're calling Randy Edsall "Rangoon" for an as-yet inexplicable reason. Is he deep-fried and crabby … heyyyyyy HE IS. Point Maryland. You'll need it.

The without-question most humiliating pratfall of the week goes to Pitt, two-touchdown losers to I-AA Youngstown State. Pitt was at least 11 points down for the last 27 minutes of the game. This is all Todd Graham's fault. (Seriously.) But Pitt fans aren't having it:

can we just hire the ysu coach?

Everybody associated with coaching this crap sandwich should be fired before they leave the stadium.

With that sage advice, I ride off into the sunset.
Adios fellas.

At least "We Are Penn State" is a lot closer to "We Are Duke" these days, amirite? 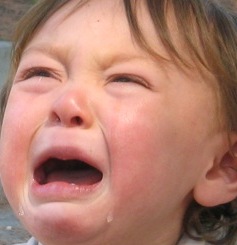 Nobody played a real team; everybody won. I tried to find a Savannah State message board on which people were complaining, but there's no such thing.

Penn State… never mind. It's bad enough that everything else happened. Piling Ted Roof, defensive coordinator on top of that is evil even for Crazy Old Testament God. I declare a season-long moratorium on Penn State schadenfreude unless I find something just amazing.

Minnesota actually won, but it was touch and go at UNLV for a long time and I was following the #gophers tag on twitter long enough to catch this:

This is the point where we just start hoping we can get out of here without our coach having a seizure. #gophers

Also, screw you Buffalo Wild Wings and your stupid overtime commercials, screw you.

Are you kidding me? 4 minutes left in the #Gophers game and Buffalo Wild Wings is kicking everyone out?!

Cal cut the ribbon on their brand-spanking new revamp of Memorial Field, took the field against Nevada, and lost. This is about right.

I think this pretty accurately sums up the day

After a deflating Cal loss you get a unique sort of depression. A nerdy depression unparalleled in college football:

Losing sucks ass. It sucks as much ass as an industrial ass-sucking machine. It sucks ass with verve, efficiency, and intensity. …

Chris Harper has a tractor beam in his left hand. Based on the evidence of his touchdown, I am completely certain that for at least one snap Chris Harper tapped into a previously unknown X-Men-esque mutation to will the ball into his left hand, there forever to stay. Every time I think of that catch I get the warm and fuzzies. Then I think about the rest of the game, and I remember that losing sucks ass. Then I try to think of nothing at all, but then I think of Chris Harper’s Amazing Spider-Man (fucking mixed comics metaphors HOW DO THEY WORK) impression, and the cycle begins again.

Northwestern has an 18th-century history/sports blog, but damned if anyone else can touch that. Stanford, step your game up.

And if that wasn't bad enough, they switched to Pepsi!

I think the movie "The Invention of Lying" got it right as to what the purpose of Pepsi is in their "honest commercials": Pepsi… for when there is no Coke.

So I was pretty disappointed when I saw that they were dispensing Pepsi products.

Elsewhere in the league, Colorado lost to Colorado State again, and not even one of those old Sonny Lubick teams that would punch random passersby in the mouth. This calls for something entirely reasonable:

We need a hostile takeover of the University

Unfortunately, none of this will change until Benson, Distefano, and Bohn are displaced from their positions. 10 straight losing seasons. Just saying.... it's the only way wholesale change happens at CU.

Until then, it's lip service and window dressing from men not fit not lead.

…until the thread peters out three comments later.

Kentucky football failing is not a notable occurrence. Derek Dooley almost got chased out of Tennessee last year when the Vols lost to Kentucky for the first time since life arose on Earth. Last year's most famous bit of trash talk ("they s'posed to be SEC") was directed at the Wildcats by a Western Kentucky player. Kentucky is not good at football. They proved this further last weekend, losing to Louisville 32-14.

But even the perpetual malaise of Wildcat football cannot obscure the shining beacon of failure that happened Saturday:

An all-timer. First, the big splashy fail that is the centerpiece. Then the eye drifts to the brah having a moment with the older black guy behind him. An awkward, awkward moment. It's okay, guys, you're breaking down barriers. Next time you'll get it.

In the top corner, the forever alone anonymity of a man offscreen left hanging. He knew the score. Those guys are talking about hunting. The flattop brah isn't even looking. But maybe … just maybe … human contact is achievable. Maybe this time. No. Maybe this time. No. Keep looking, though. One day, flattop brah will see forever alone offscreen man, and something disastrous will happen.

Finally, you return to the centerpiece, and notice something. What is it? It's behind the fail.It's hard to make out. It's just a frame. A single frame revealed just before the reset. A frame of utter, Mortified-Michigan-Punter horror. 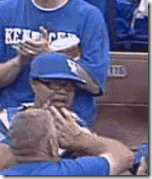 This is the greatest thing Kentucky football has ever or will ever do.

NEXT WEEK: several more Michigan starters have their ACLs exploded by Air Force cut blocks. Pitt takes on an actual I-A team. Ty Willingham comparisons fly fast and furious in the aftermath of the LSU-Washington game. And the Nebraska-UCLA loser fuuuuuumes.