That Guy: The Weak-Armed Outfielder, Who Takes 300 Years To Get A Ball To Home Plate

Share All sharing options for: That Guy: The Weak-Armed Outfielder, Who Takes 300 Years To Get A Ball To Home Plate

Welcome again to THAT GUY, a recurring feature in which we celebrate the baseball players we're bound to see if we watch for long enough.

Today we're going to use the example of Johnny Damon. He is a good player (well, not this year, but you know what I'm saying) who has enjoyed a long and successful career. Problem: HE CANNOT THROW. Dude has no arm. A Johnny Damon throw to home plate, or even to the cutoff man, tends to take anywhere between 300 and 500 years.

No, I'm serious. Every Johnny Damon throw is a 3,000-page epic that spreads across volumes, generations, and continents, wandering for centuries through the sands of time until finally reaching its destination.

Here's a recap of the time Johnny Damon tried to throw out Curtis Granderson in 2009. It's far too long to post in its entirety here, so I'll offer an abridged version.

Ahem. So. Page 1. Johnny Damon's standing in the outfield. 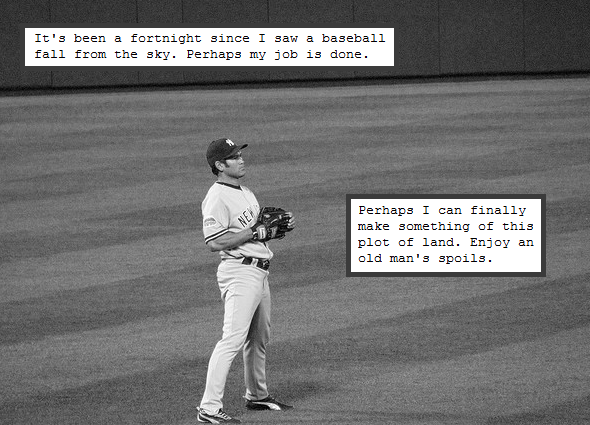 Damon sort of fills the "middle-aged adventurer" archetype here. He's getting old, and he longs for a simple life. 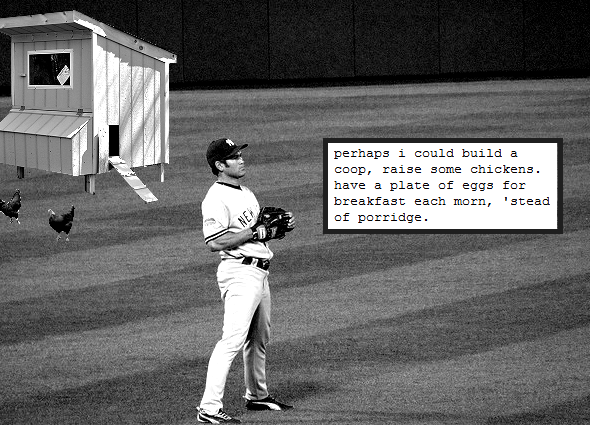 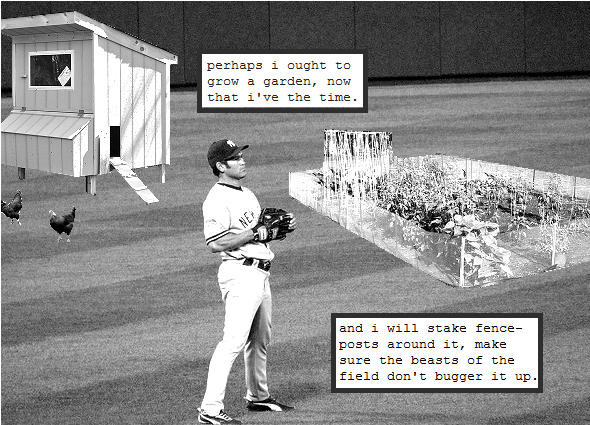 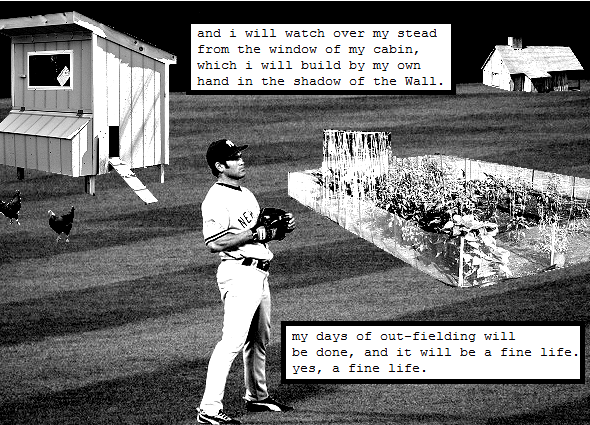 But just as it looks as though he'll be able to settle down and live his quiet life, a ball drops from the sky, and he is tasked with a sacred duty: Return the ball to home plate. And now our hero's epic begins.

We'll go ahead and flip all the way to page 383. Just to fill you in, by this point Damon has befriended a Venezuelan priest to help him navigate the treacherous mountain ranges in left field. But the priest was mortally wounded when dealings with an indigenous tribe went terribly awry, and Damon was forced to carry on alone. 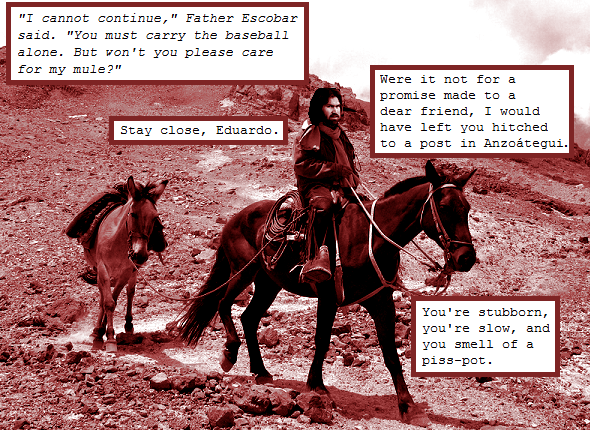 His spirits are lower than ever. Three years into his journey, he still has to take the ball another 200 feet or so, and he begins to doubt that he can make it alone.

The next 400 pages concern Damon's rise to political power in Indonesia, which in Johnny Damon's baseball diamond is somewhere in left-center. Frankly, that part's kind of boring. Lots of talking, no action.

We'll skip ahead to page 900 or so, at which point Damon must enlist the help of an eccentric, power-hungry duchess to secure entry into shallow left-center field. 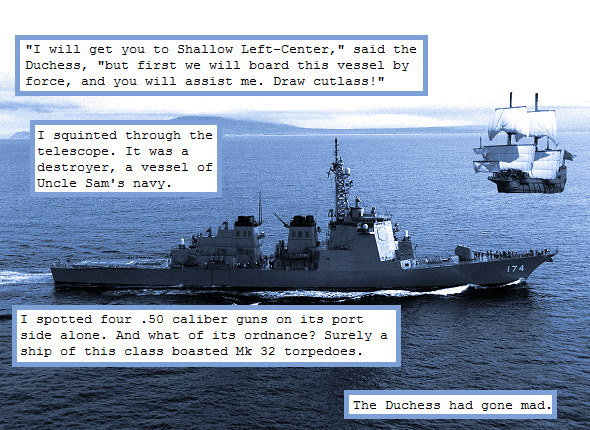 Just in time, Damon successfully stages a mutiny, wrests control of the wooden vessel, and hands the Duchess off to the Coast Guard. He's saved his shipmates from certain death, but he's also squandered his only means of getting to the infield. And in so doing, our hero ...

... sorry. Have I lost you? You look bored. I know all this stuff is pretty dense, but I've tried to break it down as well as I can. Here. Here, let's try a map. 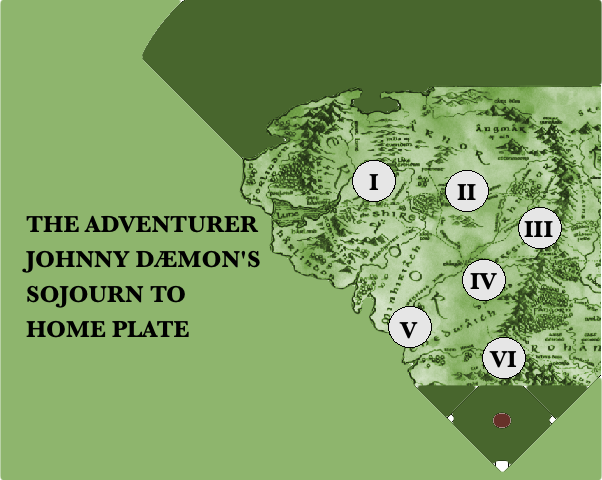 The remainder of this epic consists of six major plot lines:

I. Damon is apprehended and thrown into a dungeon by a petty tyrant, who plans to harness the baseball's power for his own sinister ends. He escapes his underground prison and foments an uprising of the oppressed peoples, deposing the tyrant just before he's able to use the baseball to open a portal to Hell.

II. Damon stumbles through time and into the lives of a Reconstruction-era widow and her children, helping to restore her deceased husband's shoe-repair business to its pre-war prosperity. He grows passionate, over both the woman and the craft of shoe repair, and for a time considers abandoning his quest to return the baseball. She convinces him to resume his journey, saying, "Adventurer, if we did not travel, there would be no need for shoe repair." He says his tearful goodbyes and soldiers on.

III. Damon pauses on his travels at a coffee shop near NASA headquarters. He chances upon a dossier mistakenly left by a high-ranking official. Within, he learns that the Moon Landing was staged, that all photos of Earth from space are manipulations, and that the end of all matter in the Universe is roughly 5,000 feet above sea level. He flees from government agents desperate to destroy the information at all costs. This chapter ends dramatically with Damon on a mountaintop, setting the dossier aflame, and shouting to a helicopter, "this is what you wanted? Well here you have it, you monsters!" The government official in pursuit of Damon, having experienced a change of heart, allows Damon to go on his way.

V. Damon encounters a river over which there is no bridge, and with currents so strong it cannot be forded. This territory is the domain of an eccentric old tycoon, determined to build a bridge from the Americas to Europe. Knowing this cannot be done, Damon nonetheless presents himself as a master architect, and guarantees the tycoon that he will build him this bridge -- when, in fact, he's merely building a bridge across the river. This ends with Damon riding across the river on horseback, then turning and seeing the betrayed, tearful expression of the rich old man. "I wanted only to see Brasil," he says. Without words, and with a heart of stone, Damon carries on.

VI. Racing isn't just a game on the Tokyo streets. It's a way of life. Damon learns this the hard way when his friend runs into trouble with the Yakuza. Suddenly, Damon must settle his debt by racing in a winner-take-all underground event. Thanks to an iron will and a well-time boost of N2O, Damon wins the race, the car, and his friend's freedom, and finally reaches home plate.

Unfortunately, this epic is a tragedy. Johnny Damon finally gets the ball to home plate ... only to find that the play has ended long, long ago. 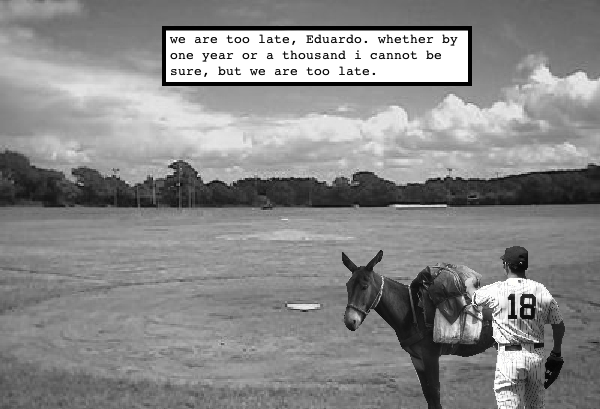 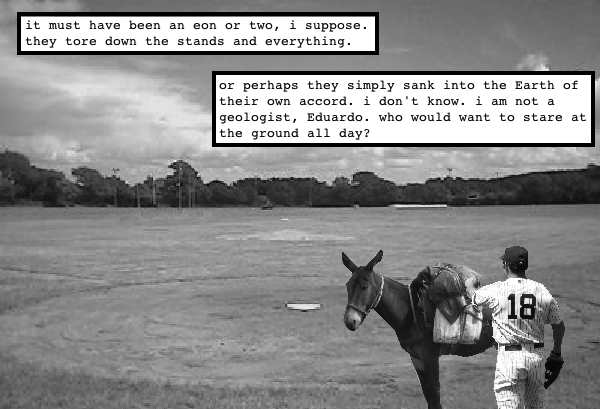 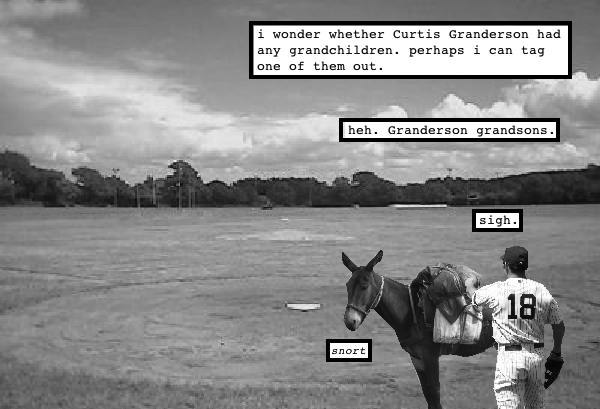 And that is the story of every Johnny Damon throw from the outfield. It's sure to involve bears, goblins, civil uprisings, spacecraft, underwater observatories, love, hate, revenge, sword fights atop city skyscrapers, fear, hope, and ultimately, dread.

In other words, everything can and will happen. Except for actually throwing the runner out.

For further adventures in THAT GUY, please see our entry on the "No-Hit First Baseman."