Not All Shooters Are Created Equal

Just because three-pointers are a generally good idea doesn't mean everyone should take gobs of them. Guess who I'm talking about? ... Uh huh.

Share All sharing options for: Not All Shooters Are Created Equal 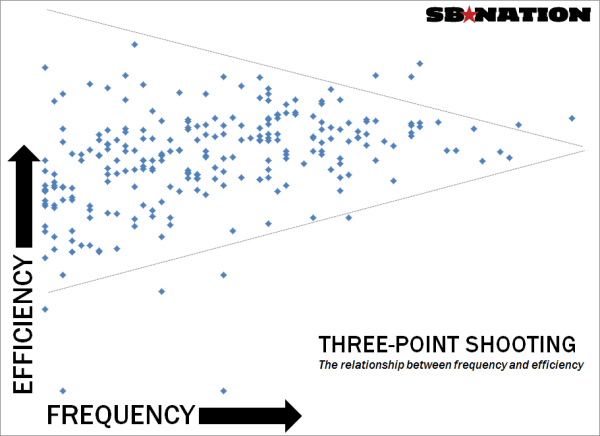 There's a bit of a cone shape going on here. The most frequent three-point shooters (that's Ryan Anderson on the far right) collect more or less in the upper middle range for efficiency. As you move out with more players taking relatively fewer attempts, you get a nice efficiency spread: there are, for instance, good shooters taking three bombs a game (specialists or roleplayers, likely) and there are bad shooters taking three bombs a game (superstars, point guards forced to bail their team out). There are also outliers, including those two chaps way at the bottom. (That'd be Darington Hobson and Derrick Byars, who played a combined seven games last season.)

That general cone shape follows us when we limit the field even more strictly to look at individual players. To make judgments and cast proper aspersions, I took the players who averaged 4.5 three-pointers per game. There were 28 players who fit the bill, a field not too unwieldy to look at. Here's that plot. 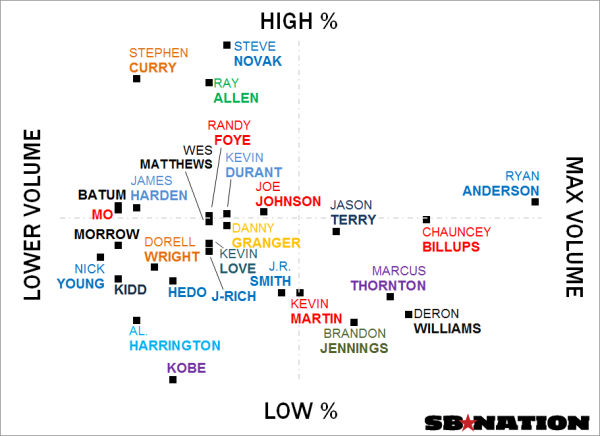 All of the players' names should be self-explanatory, though I had to abbreviate a bit. "Mo" is Mo Williams, not Marreese Speights. "Morrow" is Anthony Morrow, not the Marvel mutant Marrow. "Kobe" is that Kobe. Oh yes it is. "Batum" is of course Nicolas Batum, but I'm pretty sure he should just go by "Batum," because that sounds way more imposing in a WWE villain sort of way. "J-Rich" is Jason Richardson, not a poorly spelled Quentin Richardson.

The cone shape is there: at the tip-top frequency levels where Anderson, Chauncey Billups, Deron Williams and Marcus Thornton reside, the efficiency is all in shouting distance of average in either direction. As you move down the frequency ladder, the spread on efficiency widens. You have the excellent (Stephen Curry, Steve Novak, Ray Allen) and the ... "not good" (Kobe, Al Harrington).

You may remember from Tuesday's piece that the "break-even" percentage on three-pointers compared to two-pointers on a league scale is 32 percent. That is, shooting 32 percent on three-pointers is better than shooting league average (47 percent) on twos. Because of the extra points involved. Of our 28 players who took at least 4.5 threes per game last season, only Kobe (30 percent) shot worse than the break-even point. So even Thornton, Deron and Harrington gave their teams a boost versus the standard issue two-pointer. Kobe did not. (This is more egregious considering the elite two-point options the Lakers had in Pau Gasol and Andrew Bynum.)

Before this turns into another piece all about Kobe, it's worth considering whether the players who shoot really high percentages ought to take more threes. Curry, for example, shot 45.5 percent on threes last season. He took 4.7 bombs per game. What if he took something closer to Anderson's 6.9? What if Curry took five or six three-pointers per game? Theory says that his percentage overall would drop, because he's likely already taking the easiest, most open threes. Additional threes may need to come out of more difficult situations, with less likely positive results. But even if additional threes dropped Curry's overall three-point shooting to 40 percent, it may still be worth it unless the Warriors' other offensive options are really efficient. That's the trade-off that most be monitored: where's the point of diminishing returns, and what's the marginal cost and value of additional three-pointers taken? The breaking point will be found where the drop in Curry's overall shooting efficiency is larger than the upgrade between the three taken by Curry and the other use of the shot by the team.

Of course, this is all theoryball: Curry isn't and cannot do this math on the fly. But it's important for coaches and analysts to consider when planning for games or the season. If you think Curry is far from the breaking point, you encourage him to take even more threes. If you think he's already close, at or past the breaking point, you tell him to maintain his trigger finger or dial it back. That's how analysis can best inform play on the court.