Baseball's a funny game: robotically consistent in some cases, random and adventitious in others. Sometimes, a player comes out of nowhere — or, at least, seemingly nowhere — and has a season no one could have anticipated. These are the stories of those players. 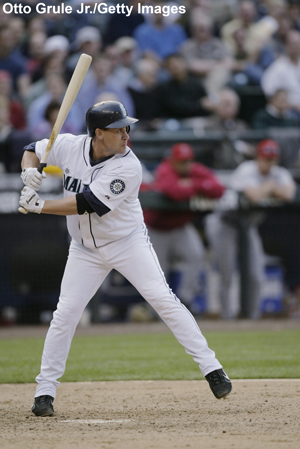 Boone, of course, wasn’t the only offensive addition of note – there was also a certain Ichiro Suzuki. But in December 2000, Boone signed a one-year contract with Seattle worth $3.25 million. Said Mariners general manager Pat Gillick:

"We think Bret is a nice fit for our ballclub. He's a proven run-producer who will add a little pop to our line-up while providing solid defense for our pitching staff."

Boone was just leaving the Padres. To that point in his career, he’d hit .255/.312/.413. According to FanGraphs, over the previous five years he’d been worth a combined 1.6 wins above replacement. He was a right-handed hitter going into a ballpark in Seattle that killed right-handed hitters.

For the sake of comparison, here’s what Rodriguez did over a full season in 2000:

The era in which these numbers were posted calls into question their legitimacy, and no Mariners fan would deny that Boone’s 2001 looked curiously anomalous. But what happened, happened, and what’s more is that Boone practically repeated it in 2003. The first time, it was a completely uncharacteristic season. The second time, we’d seen it before. Boone’s 2001 is and was unlike anything I’ve ever experienced as a Mariners fan. In a way, Boone was Jose Bautista before there was Jose Bautista. He’d burn out, but he burned bright.

Center field has historically been a problem position for the Texas Rangers, a revolving door that has featured tweeners, failed prospects, quality defenders who can’t hit, and waiver bait. Over the 40 years the Rangers have been in Texas, only three full-time center fielders (defined as players who played at least 100 games in center) have had a bWAR of at least 3.0: Mickey Rivers had a bWAR of 3.3 in 1980, Josh Hamilton had a bWAR of 5.2 in 2008 (his only season in Texas as a full-time center fielder), and, remarkably, Gary Matthews Jr. had a 5.0 bWAR in 2006. 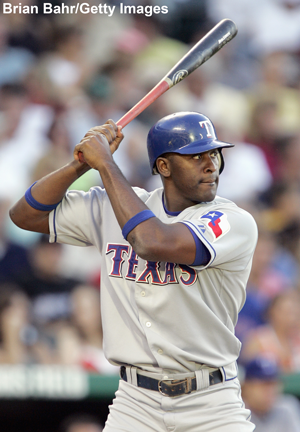 Matthews was a baseball vagabond when the Rangers signed him to a minor league deal right after he was released by the Braves in April, 2004. A one-time top prospect (he was rated #73 on Baseball America’s top 100 list heading into the 1999 season), Matthews had been sold once, traded twice, and claimed on waivers three times before he wound up in Texas. He had made 500 plate appearances in a season only before, and he looked like a journeyman just barely hanging on.

Matthews started the 2004 season in AAA Oklahoma City, and was red-hot to start the year, putting up an OPS over 1.000. He was called up in late May and spent the rest of 2004 and all of 2005 with Texas, playing mostly center, and doing an adequate job in the role. Matthews went into the 2006 season, his walk year, with a career 723 OPS, and seemingly would be hoping to do a good enough job as the Rangers’ centerfielder to persuade a team to give him a multi-year deal in the offseason.

Matthews ended up having a career year in 2006. After posting a 756 OPS in 2005, Matthews added more than 100 points to that in 2006, putting up a .313/.371/.495 line, setting career highs in average, on-base percentage, doubles, triples, homers, runs scored, and RBIs, and almost doubling his previous career high in bWAR, which was 2.8. Matthews also had a highlight-reel catch in center field to rob Mike Lamb of a home run that long-term Rangers broadcaster Eric Nadel described as the best catch he’d ever seen a Rangers outfielder make.

Matthews, as a 32-year-old free agent coming off a career year, was a hot commodity, and the Angels signed him to a five-year, $50 million deal. There were warning signs, however, that his 866 OPS wasn’t sustainable. Aside from the fact any player in his early 30s can be expected to decline, Matthews’s walk rate and isolated power were almost the same in 2006 as they had been in previous years. His huge offensive performance was fueled by a .343 BABIP that he appeared unlikely to maintain.

Matthews, of course, is now considered a historically bad free agent signing. He was mediocre for Anaheim in 2007, sub-replacement-level in 2008 and 2009, and the Angels finally ate most of his salary and sent him to the Mets, who released him after he posted a 507 OPS in 36 games.

For a full decade, Terry Steinbach was a steady hand behind home plate for the Oakland Athletics. He ably handled a veteran pitching staff while profiling as a slightly above-average hitter, he played in three World Series and three All-Star Games, and he was one of the many fan favorites on the A's teams of the late 80's and early 90's. 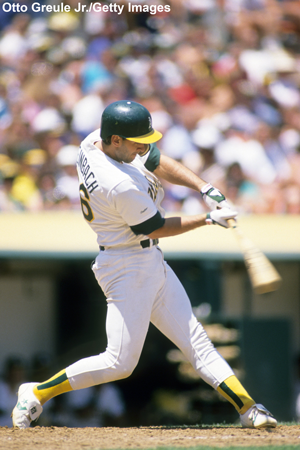 One thing that Steiny was not, however, was a slugger. After cracking double-digit homers just once in his first five major league seasons, he did add a bit of power to his game at age 30. From 1992-95, he hit 48 homers, but he still never surpassed his 1987 career-high of 16.

Then, 1996 happened. You may recognize 1996 as the year that players like Brady Anderson (50), Todd Hundley (41), and Ed Sprague (36) doubled (or more than doubled) their previous career highs in homers. The 34-year-old Steinbach did the same, knocking 35 dingers and driving in 100 runs. Sure, those baseball card stats didn't lead to a career high in WAR, or even OPS+, but they look really, really pretty on his Baseball-Reference page. They also look really, really out of place next to his other season totals. In fact, he set a short-lived AL record for homers as a catcher, which was broken three years later by Pudge Rodriguez. Pudge's record of 35 still stands in the AL, and Steinbach is still at #2 with 34 (his other homer that year came in a pinch-hitting appearance).

It's also worth noting that 1996 was a contract year for Steinbach. However, if you were thinking that he dialed it up to cash in on the free agent market, you'd be wrong. According to this 1997 interview in Sports Illustrated, Steiny was planning to retire when his contract expired after 1996 and return to his home state of Minnesota to hunt, or make snow angels, or whatever it is that people do in Minnesota. After his career year, though, his plans changed just a bit; he instead took a 33% pay cut to sign a three-year deal with the Twins, turning down several more lucrative offers in favor of keeping his family settled in one place.

Steinbach had always been a favorite of mine growing up, and I remember being bummed when he finally left Oakland. If I'd known then what I know now - that he parlayed his unexpected career year into a hometown discount rather than chasing down big money somewhere - I would have liked him even more. 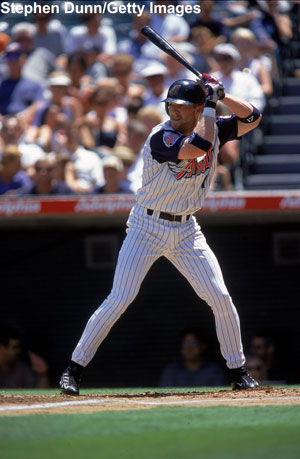 So advanced metrics reveal one of their all-time favorite whipping boys to be substantially more valuable than the roided colleagues of his glory days. If he had only been a great glove with smart speed (career stolen base percentage over 75% ranks in baseball’s top 150 all-time) he might have been better appreciated.

But Darin Erstad had a season so un-Darin Erstad-like that he set himself up for pundit catcalls for almost a decade to follow. In 2000, Erstad hit and got on base like few players ever. He had 240 hits, the first player to do so since Wade Boggs in 1985 and nobody else since 1930. The RBI stat has been rendered almost meaningless in advanced baseball discourse but it is nonetheless amazing that Erstad had the only 100-RBI season ever for a leadoff hitter. He scored once for every two hits (121/240) that season and notched an OPS+ of 137.

But he never scored more than 100 runs again. He never came close to 200 hits in a season, either. It seemed to every casual and passionate observer that he had lost it. Word later came out that he separated from his wife after that season and the career arc took on a Hollywood twist.

But in reality, disregarding 2000, Darin Erstad had a remarkably consistent career. He was injured in 2003 and 2006, appearing in 67 and 40 games, respectively, but between 1997 and 2005 he only had one other season of less than 133 games played. He delivered 79-99 runs each time, 146-177 hits each season, and had an OPS in the mid seven-hundreds at almost all times. Except in 2000 when he flirted with single-season records using only the base hit as a weapon.

If Erstad had not had the dominant 8.2 WAR season in 2000, he would be regarded as a great defender and reliable singles hitter. But pegged with this brush of superstardom along with the worship he engendered for his work ethic and a reputation for being intangibly gritty, he became the go-to mockable man for a new generation of baseball analysts who snickered over his absence of power, his lack of patience, and his love affair with the strikeout. And then they invented advanced defensive stats and shut their arrogant pie holes. Had he not amassed the numbers in 2000, the stat generation might have been a little kinder and gentler to Erstad.

Angels fans meanwhile would retire #17 right now if given the vote; erase the 2000 season and they would all still be there for him. You can't say that about many players with a lifetime OPS+ of 93.

This is a tough one for Astros fans, because they've never really had a player overreach too much in just one season. Dickie Thon is an easy choice, since he set the club record for homers by a shortstop with 20 in 1983, but the fact that he never did it again is more tragic than it is out-of-character. 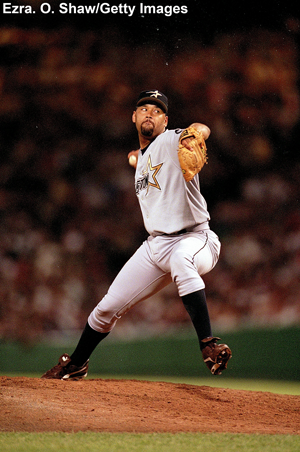 Chris Johnson hit the cover off the ball in 2010 after he was promoted, but everyone pretty much knew that was because of BABIP and he was good enough in 2012 to show that his first season was slightly more in-character.

Greg Gross may have the weirdest career of any Astro. He played exactly one season as a regular (1974), which was also his rookie season as a 21-year-old. He hit .314/.393/.377 with zero home runs and 12 stolen bases on 32 attempts and he walked almost twice as many times as he struck out. But, he kept that patience for long enough over the rest of his career that you can't really say it was out-of-character.

Maybe I'm overthinking the question, but the only guy that seems to fit is Lima Time™ himself. Jose Lima came to the Houston Astros in 1997 with a horrendous 20-start, 153-inning background in Detroit, when his ERA+ was 80. Ick.

For some reason, Houston decided to stick him in the starting rotation in 1998, after he threw 75 innings with 63 strikeouts in relief in 1997. His ERA was still above 5.00 that year, but his FIP dropped below four for the first time in his young career, so there were signs of hope. He rewarded Houston with 16 wins in '98 and 21 wins in '99.

That '99 season, when he nearly set the team record for victories, is when he threw 246 innings with an ERA+ of 125 and 187 strikeouts. Lima was perfectly built to pitch in the Astrodome. As a control guy (1.5 walks per nine innings in his first three years as an Astro), Lima could use his very good changeup to try for strikeouts. If the hitter got around on one, Lima had all that nice green carpet in the outfield to gobble up those fly balls.

Then, Houston moved to erstwhile Enron Field, Lima got freaked out about pitching there and started giving up home runs by the bucketful. He never posted an ERA+ over 100 again. While it lasted, Lima Time was glorious to behold. The fact that he flamed out so quickly might even make him more memorable to Astros fans.