The Warriors let a golden opportunity slip away with some awful transition defense in the fourth quarter of an 11-point loss to the Nuggets. That and more in Monday's NBA scores roundup.

It's very hard to win in Denver, but this was still a missed opportunity for Golden State. It controlled the game for three quarters, but its transition defense fell apart in the final frame, allowing the Nuggets to go on a 19-2 run to get the victory. Denver played well, but I agree wholeheartedly with Golden State of Mind's conclusion: the Warriors gave this game away with sloppy offense, poor recovery in the open floor and a lack of attention to detail with their coverages.

Here are just a few examples:

1. This is a transition possession where the Warriors have three guys back and still don't pick up the trailing Wilson Chandler cutting down the lane. Watch how Jarrett Jack runs to the ball when Stephen Curry is already there, opening up Chandler's dive to the rim. 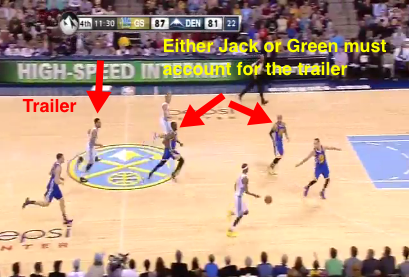 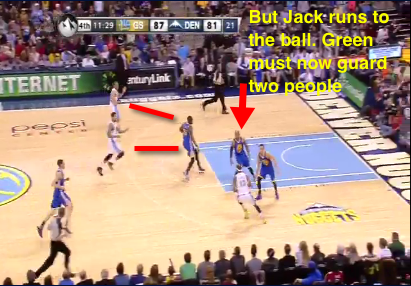 Draymond Green does his job, floating to the opposite side to cut off the cross-court pass. Jack, though, goes way too close to Corey Brewer, messing up the coverage. That's how you get this result out of a 2-on-3 fast break. 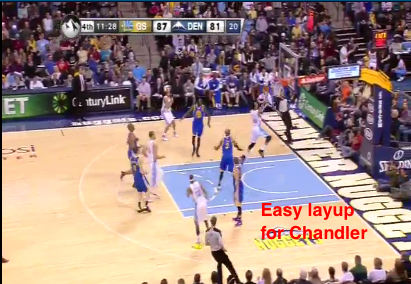 2. Let's pick on Jack again. Watch how Brewer -- one of the league's best runners in transition, to be fair -- zips right past him up the left wing, leading to a layup that didn't have to happen. 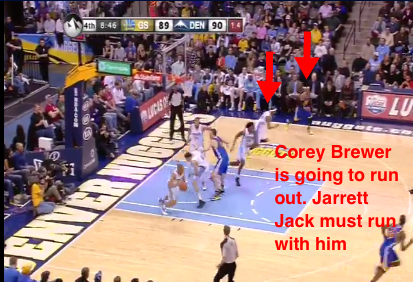 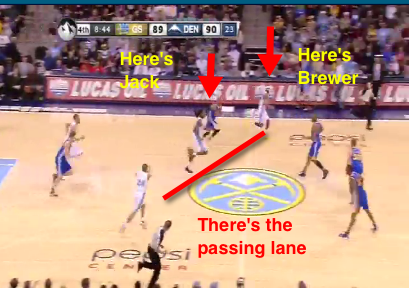 The worst part is that Jack took the shot, then compounded it by letting his man run right through him. Andre Miller notices this and whips a beautiful cross-court pass to Brewer for a layup. By the time Stephen Curry sees what's happening, it's too late. 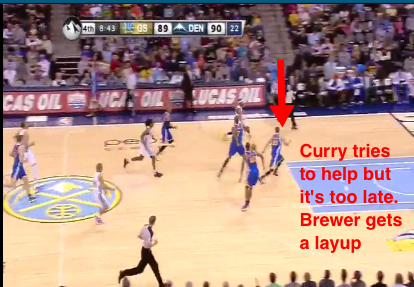 3. Even when the Warriors contained the initial fast break, their transition defense cost them. On this play, the Warriors get cross-matched in transition, with David Lee guarding Danilo Gallinari and Harrison Barnes defending JaVale McGee. 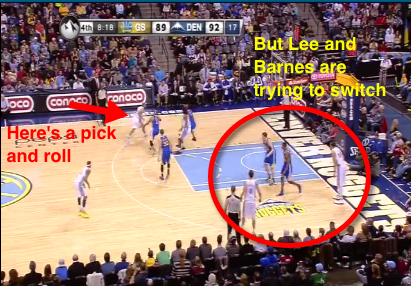 As Miller and Kenneth Faried run a "random" pick-and-roll on the opposite side, Lee and Barnes try to switch back to their assignments. By doing that, though, Lee is not in position to help on the rolling Faried, and the Warriors give up a dunk. 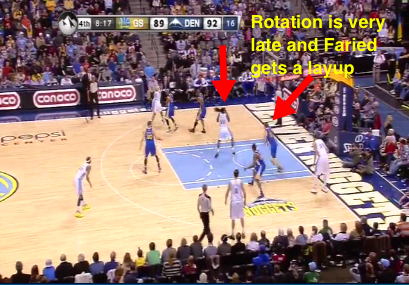 That play could have been avoided with smarter transition defense that kept each player on his original man. Instead, one of Barnes and Lee didn't get back correctly, and their attempt to switch back led to a layup.

It's unfortunate because these were the kinds of things the Warriors have done so well all season. Their fans have to hope that Mark Jackson noticed these breakdowns, too, and won't let the players move on without telling them about their mistakes.

A big win for the Nets, fueled by a big run at the beginning of the fourth quarter. The Nets moved Brook Lopez out onto the floor instead of in the post, and that opened up a lot of opportunities for him and others. That's the only way you have a chance against the stifling Pacers' defense.

Indiana's offense, though, is a nightmare.

The Cavaliers are terrible. There's no reason to spend much more time analyzing this game.

Portland's late magic nearly saved it again, but the Thunder had ultimately built up too much of a cushion in this one. Oklahoma City's offense was pretty cringe-worthy without Serge Ibaka, but it hounded Damian Lillard all night and had enough to win in the end. Lillard missed some open shots, but the Thunder also did a great job of trapping him on the pick-and-roll and preventing him from going to his left and pulling up for threes. Credit Russell Westbrook, Nick Collison and the other Thunder bigs.

Tim Duncan: 12 points, nine rebounds, seven blocks, five assists, three steals in 29 minutes. He could have done much more, but he didn't need to. What a player, even this late in his career.

Looks like the Knicks are all fine now that Carmelo Anthony's hunger strike is over. In all seriousness, this was a nice win for the Knicks, considering J.R. Smith played so poorly. They've been through a rough patch recently, but if they can hang on to second place in the East before Iman Shumpert and Raymond Felton come back, they'll be OK.

The Hornets, meanwhile, still aren't sure of their roles. These things will happen whenever you welcome a ball-dominant, but effective guard like Eric Gordon back into the fold.

Milwaukee continues to be very effective during most of the game with lineups that don't include both Brandon Jennings and Monta Ellis. In this game, it was strong play from John Henson and the rest of the Bucks' bench that carried them back from an early deficit. The time to live with the Jennings/Ellis pairing is down the stretch, when it becomes more difficult to create shots. Otherwise, it would probably benefit Jim Boylan to split them up as much as possible.

The Raptors got a big lead by hitting tough perimeter shots, and eventually, the well went dry. DeMar DeRozan has come a long way, but watching him try to post up late in the game was difficult.