Who will be this year's Mike Trout?

Share All sharing options for: Who will be this year's Mike Trout?

No one. Don't be a fool. You won't see another rookie season like Mike Trout's for another 50 years, if that. I hope you bought a shirt or something.

There's an excellent chance, though, that there will be a rookie this year who does something like Trout. The Angels started last season with one of the game's very best prospects in the minor leagues. The Angels will start this season with a player who will color your opinion on whether the Angels will be good, and he'll do it for at least the next five seasons. That's the real question. Which rookie will take that step from prospect to cornerstone in 2013?

The hot pick is probably Wil Myers. Not only is he one of the better prospects in baseball, but he moved to a team that has a spot open for him. There's no Jeff Francoeur blocking him in Tampa, no sir. The Rays are also counting on Myers to produce soon, and the idea of Myers succeeding right away would fit neatly with the Rays-r-smart/Royals-r-dumb dichotomy that the Internet and the baseball gods all seem to love.

But Myers struck out in 24 percent of his at-bats between Double- and Triple-A last year. If he did that in the majors, he would have had the 25th-highest strikeout rate in baseball, but he did it in the minors. Which isn't to say he'll fail. But it's a sign that his success might be gradual rather than instantaneous.

Jurickson Profar is probably the best prospect in baseball by popular acclaim. He has everything: defense, age, power, patience, position. It would be hard to construct a better prospect Weird Science-style, and Jon Daniels didn't even have to wear a jockstrap on his head. But Ian Kinsler doesn't want to move to first, and the Rangers are reluctant to ship off Elvis Andrus. They'll figure it all out, but I wouldn't bet on Profar getting 500 at-bats in 2013. So he can't be the unanimous choice.

No, if you really wanted a truthful headline, it would be more like "Can this baseball writer figure out a way to slobber over his pet prospect?" And the pet prospect in this case is Oscar Taveras.

But first, a little background. I'm fascinated with the hitter factory that St. Louis is running. I'm not sure if the Cardinals could have made something out of, say, Matt LaPorta or Brett Wallace, but I would have given them both a much better chance at success if they'd come up with the Cardinals. Jon Jay wasn't a prospect of note; neither were David Freese or Allen Craig. They all made several stops on their way to the majors, and they were all infused with liquid anti-pitcher.

2. The power. He hit 23 homers, which is good for a 20-year-old, but don't forget about the 37 doubles and seven triples. As he fills out, some of those should go over the fence, too.

3. The speed. Again, seven triples. He also stole 10 bases, getting caught once.

4. The strikeout-to-walk ratio. He isn't Eddie Joost just yet, but he walks enough, and he doesn't strike out a lot.

Those are the findings within a simple stat line. But if you wanted to use your eyes, you could check out the video repository here. Or maybe you just want to peek at a selection: 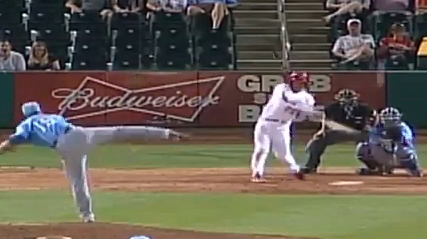 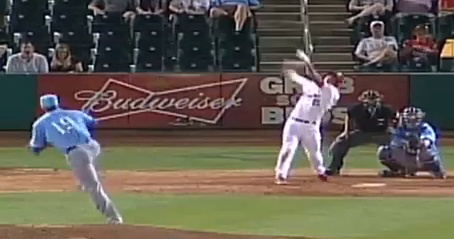 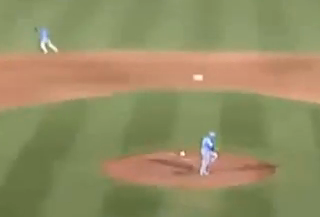 The shortstop is pointing to the sky because it's a pop-up.

There are more typical examples of Taveras's power on MiLB.com, but this one is just fantastic. He turned 20 about two months before he hit that off-balance, opposite-field moon shot.

The Cardinals will figure something out, though. It might be a trade involving Jon Jay or Allen Craig. Carlos Beltran's knees might die on their way back to their home planet, like Poochie. By next season, the Cardinals will have definitely figured something out. I'm thinking they'll figure it out by the end of May.

Just like the Angels and Mike Trout. Not that Taveras is like Trout. No one is. But, if you had to pick one guy to mimic Trout, well, uh, I don't know. I mean, I'm not sayin', I'm just sayin'. Look, it's not fair to put those kind of READ BETWEEN THE LINES, PEOPLE, OSCAR TAVERAS IS EXACTLY LIKE TROUT, AND HE'LL WIN THE MVP THAT TROUT WAS ROBBED OF AND WIN A VICTORY FOR GREAT JUSTICE.

I mean, Oscar Taveras is a good prospect, and I'm excited to see him in the majors. If he gets an opportunity, he has a great chance to be the rookie who most changes the way you look at his team's future. All he needs is a spot.