The players you won't be watching in the World Baseball Classic

A lot of All-Stars are bowing out of the WBC before the tournament gets going in March. What gives?

Share All sharing options for: The players you won't be watching in the World Baseball Classic

I love the World Baseball Classic.

There's no shame in that. I've seen snarky tweets and comments about the approach of the WBC, but I've bought in to the whole thing. It's baseball. Not only that, but it's the kind with boisterous crowds and worldwide attention, and it shows up in a month when baseball shouldn't mean anything. It's a free play on the pinball machine of life. More baseball. Look at the crowd in this clip:

Gigantic flags waving hither and thither, people jumping up and down. It's not the seventh game of the World Series, but it's baseball played at an extremely high level with national pride at stake. When the WBC announced that the finals will be in San Francisco, I said to myself, "Man, I have to go to that." 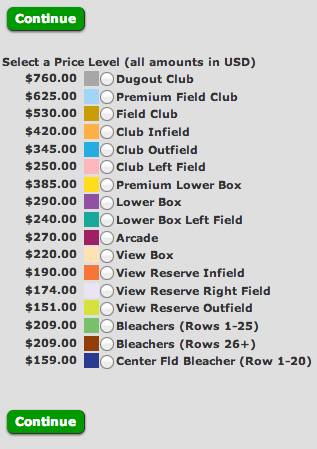 I said to myself, "Man, I wish I could go to that." The infield for Venezuela should be Miguel Cabrera, Pablo Sandoval, Asdrubal Cabrera, and Elvis Andrus. The Dominican Republic infield might be Adrian Beltre, Jose Reyes, Robinson Cano, and Albert Pujols. The Brazilian team -- and we're waiting for confirmation -- might include Yan Gomes. It's a cavalcade of talent, and I'm dying for it to start.

But let's not get nuts, here.

No Posey, Trout, Harper, Price, Cain for Team USA at WBC. Verlander and Kershaw leaning toward no. I am disappointed.

I can't fault anyone for being disappointed. If those names up there from the Dominican Republic were replaced with, say, Leyson Septimo and Denis Phipps, writing a paean to the WBC wouldn't be so easy. Part of the appeal is the "meaningful" baseball, and part of the appeal is the talent involved. If you like the WBC, you'd like it a heckuva lot more if Buster Posey, Mike Trout, and Bryce Harper were involved.

There can't be an expectation for anyone to play, though. The baseball season is a unique beast, with the 162-game season almost twice as long as that of the NBA and NHL. In addition to that, the strain on pitchers is analogous to the wear and tear on an NFL running back, where a short shelf life is the rule instead of the exception. Baseball players would almost certainly benefit by playing fewer games, not more.

Jon Morosi says the injury worries are hokum, and that the WBC might even be safer than spring training:

But no one has come up with hard evidence to suggest the tournament is any more dangerous than a spring-training game. Particularly for position players, one could argue that they are safer in the WBC, facing pitchers who are further along in their preseason throwing progression, as opposed to a live-armed 19-year-old called up from Class A to pitch in a big-league spring training game. And if a long-term injury does occur in WBC play, the player’s MLB club is insured at 100 percent for the salary he earns while on the disabled list.

There's no hard evidence, but there have been some inquiries made. Absent the hard evidence, allow me to be that guy. Doesn't it just seem more likely that a pitcher would get hurt in a March game that doesn't play like an exhibition? Doesn't that just make intuitive sense? It sure feels like it. There are, quite literally, hundreds of millions of dollars on the line. Doesn't it just feel like a bigger risk?

I think this is how Jack Morris voters arrive at their decisions, and I have to say, this kind of evidence-free reasoning is pretty seductive.

Forget about the money, though, and forget about the higher potential for injuries that might or might not exist. Focus on the length of the season and the grueling travel. Focus on the herky-jerky schedule that puts a player in Milwaukee before Minneapolis before St. Louis for nine games in a nine-day stretch. There would need to be a great reason to add anything to that grind.

So let's talk about that great reason. Morosi is right about the differences between the American-born players and the rest of the world. It would be far, far too easy to paint with a broad brush the reasons why, reading minds and assuming we know why it's easier for Venezuela to build a team of future Hall of Famers. But the easiest explanation is probably something you can come up with on your own. If you're an American, how would you feel if the U.S. won the WBC? Elated? Moderately amused? How long would that last? Would you buy a championship shirt or put a picture up on your wall?

Probably not. And that's because it's really easy to take baseball for granted as an American. It's the National Pastime. People come here from all over the globe to play it. There's no chip on the shoulder, nothing to prove. You grow up with it as an American sport, even if it's become something more over the last few decades.

It's not going to be like that for American players. Not because they're better, and not because they have the sport in a headlock -- we know that's not true. And it's not about being patriotic, either. It's baseball, not a Toby Keith song. This is about a sport that's already inextricably linked with being American, and it's about that sport being a pain in the ass with its long professional schedule. If there's one but not the other, you have Mike Trout and Clayton Kershaw in the WBC without question. Add them up, and you get a lot of polite refusals.

The shining example for this point: Ichiro. He's rubbed his scent gland on the sport, claimed it as his own, and dominated at the major-league and international levels. This time around, though, he's not playing. He's older, slowing down, and he knows it's a monster of a regular season. He'd like to prepare for the summer, thank you very much. That's his day job. That's his livelihood.

Nothing's going to change that. So we'll just have to accept the WBC for what it is: A flawed, magnificent exhibition that will never mean as much as it could, but is still a tremendous amount of fun. When the rosters get announced on Thursday, don't get hung up on who isn't there. Because the players who are there for every nation will be plenty enough.