Rush to greatness: Why is Adrian Peterson so good?

Adrian Peterson entered rarified air this season, accumulating more than 2,000 rushing and putting the Minnesota Vikings into the playoffs. What makes Peterson so special?

Share All sharing options for: Rush to greatness: Why is Adrian Peterson so good?

A lot of superlatives get thrown around these days when it comes to the coverage of the NFL and its stars. The best pass rusher. The most dominant left tackle. The most 'clutch' quarterback. The most brilliant coach. The savviest front office or the most ruthless general manager.

Most of these types of statements are hyperbole or reacted to as trolling.

With the parity that exists in the NFL, both when it comes to overall teams or talent levels on respective rosters, labeling some player or some team as 'the best' at anything is foolhardy for the most part, because the idiom "Any Given Sunday" relates not just to teams but their individual players. Much like this season's ever-changing "Best Team in the NFL" conversation on a weekly basis, similar ebbs and flows occur with individual players and positional groups.

Who is the league's best defensive end? How about safety? Corner?

Maybe the wide receiver position is less muddled, but contending with Calvin Johnson, it's hard to ignore A.J. Green, Brandon Marshall, Vincent Jackson, Roddy White, Steve Smith, or Andre Johnson. So many different arguments could be posited in favor of each of those players as "the best" and I'd be open-minded to consider any of them.

With running back though, I feel like it's pretty easy. Adrian Peterson is the best running back in the NFL, and it's not close.

As a Seahawks' fan, I'm privileged to watch one of the NFL's "elite" running backs, in Marshawn Lynch, on a weekly basis. Lynch sets the tone for the Seahawks' offense and as exciting of a player that Russell Wilson really is, it's Lynch's identity of toughness and physicality that the offense feeds off. Without Lynch and the threat he presents, the Seahawks' play-action based, explosive passing philosophy would be badly crippled. At 25, Lynch only seems to be getting better, and the advent of the read-option seems to work for him. His vision, toughness, underrated speed, and power lends to his success in taking the snap from a near-standstill, after a moment's hesitation for Wilson to make the read, and receive the hand off or let Russ keep it himself. This is not an easy thing for every running back to adapt to, but Lynch has excelled at it.

Lynch is inextricably linked to Peterson in a small way -- he was the second running back chosen in the 2007 NFL Draft after an absolutely absurd career at Cal (people tend to forget how sick Lynch was in college, before he faded into obscurity a bit in Buffalo for his first couple of NFL seasons), selected by the Bills five spots after Oklahoma's Adrian Peterson. Six seasons in, Lynch might not be the second best running back in the NFL behind Peterson -- in my opinion, it's a fairly wide-open field, and he has to contend with Ray Rice, Arian Foster, Jamaal Charles, C.J. Spiller, Lesean McCoy and now maybe Doug Martin, among others -- but make no mistake, he's an "elite" running back. And I'm fine with that label.

Numbers wise, though, Lynch had a career year to contend with his draft-classmate in Peterson, and finished the 2012 season third in the NFL in rushing with 1,590 yards on 5.0 yards per attempt.

Want some perspective on how damn good Adrian Peterson is though? AP rushed for eight more than Lynch, 1,598 yards, over his team's final 10 games.

Peterson came up nine yards short of breaking the NFL's single season rushing record last Sunday, a record that was set by Eric Dickerson back in 1984 and has held true for the past 28 years. Peterson becomes just the seventh player to break the 2,000 yard mark and now sits at No. 2 in the record book with his 2,097 yards on the season. In a "passing league" whose rules changes and protections of the quarterback have helped to promote passing more and more over the last decade, coupled with the "running back by committee" approach that so many teams now favor, that's honestly a really remarkable accomplishment.

I haven't even mentioned something that you already knew -- Peterson did all this after returning to action about nine months after tearing his ACL. Most athletes can expect to recover from a torn ACL in about a year, and a lot of players have reported that full strength doesn't really return for up to two full years after the injury. Peterson eclipsed the 2,000 yard rushing mark a little over a year to the date in which he crumpled to the turf in pain, two ligaments torn. Many pundits believed then that this injury could cost Peterson the entire 2012 season. Moreover, an injury like his costs some players their careers. The fact that he came back stronger and faster -- well, there's no way to explain how absurdly rare that is. He's like the grown-man version of Rookie of the Year's Henry Rowengartner -- a freak mutant healing of an injury resulting in super-human power and strength.

Any casual NFL observer or fantasy football owner can look at the stats and know that Peterson is a great running back. To really appreciate his brilliance though, I wanted to walk you through one play in particular that does a small part in illustrating how Peterson managed the second most prolific rushing season in NFL history.

Because I'm a Seahawks fan, and I happen to think that my team's defense is pretty decent, it makes sense to show you how badly he shredded up Seattle's D. This is a defense that, going into Week 17, was the 2nd ranked unit by Football Outsiders DVOA, and after the week's games, ended tops in the NFL in terms of opponent points surrendered.

Seattle went into the Week 9 game 4-4 and in the need of a win. During NFL.com's SoundFX feature that week, a mic'd up Pete Carroll told Seahawks' owner Paul Allen that the main thing Seattle needed to do to grab a win and some momentum this week was just to tackle well. Tackle Adrian Peterson and Percy Harvin.

The second play from scrimmage, Peterson busted a run outside, breaking four or five tackles and making at least two other Seahawk defenders miss as he racked up 74 yards before being tackled at the 1-yard line. After a week's preparation where the number one goal was tackling Adrian Peterson.

The gif above gives you the basics.

Let's slow it down. The Vikings come out in a heavy two tight end, two running back formation -- 22 personnel -- with two tight ends set in-line right and Adrian Peterson the deep back in the I-formation. The Seahawks are a team that regularly brings eight defenders into the box to defend the run and rely on Earl Thomas or Kam Chancellor to defend the deep middle. In this case, though, with the Vikings' jumbo set, cornerback Richard Sherman inches in toward the hashes and the Hawks have nine men in the box, essentially.

Minnesota will run a power-O look to the right, pulling their right guard across the formation to lead block for Peterson, followed by their fullback to clear the way. 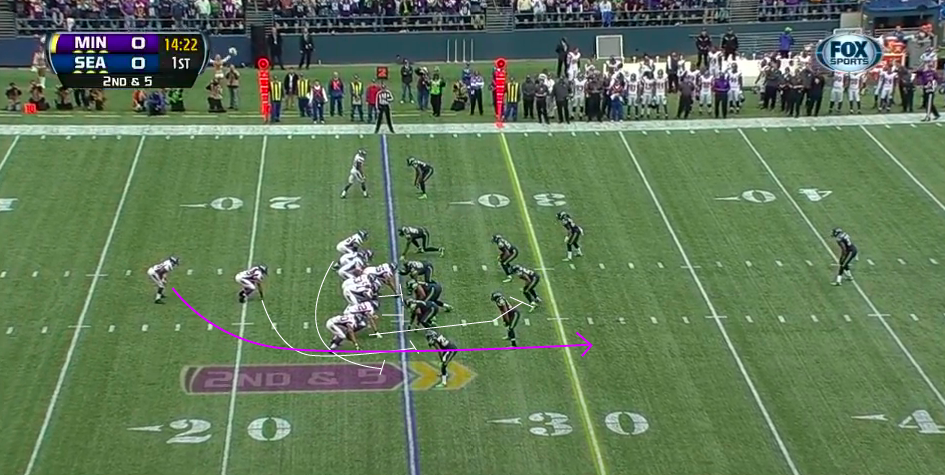 Not many teams can run effectively against a nine-man front, but only one team has Adrian Peterson receiving handoffs.

Below, you can see that the Seahawks' strong side three-technique defensive tackle, Alan Branch, is able to break through the line at the snap and is in an excellent position to make a stop in the backfield. In what's either an assignment breakdown or a slow reaction off the snap by the offensive tackle, Branch knifes through and meets Peterson about four yards behind the line of scrimmage. 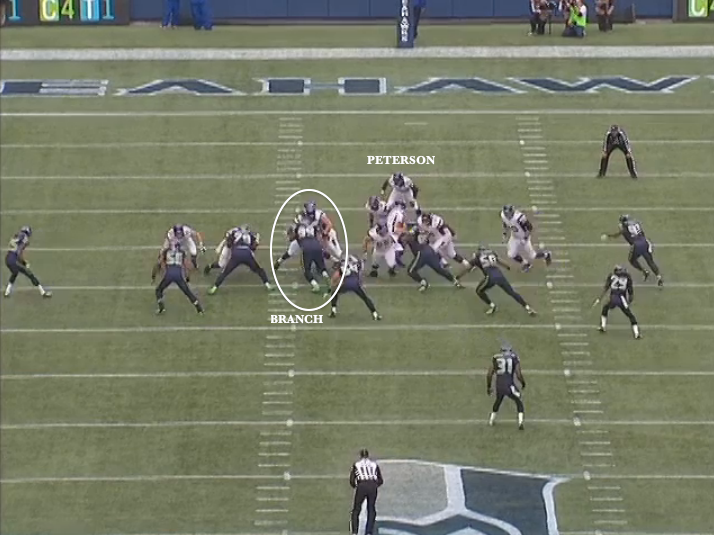 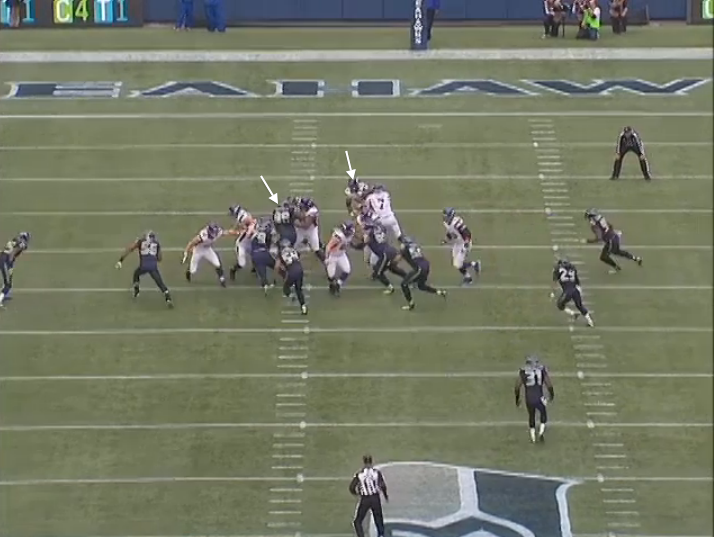 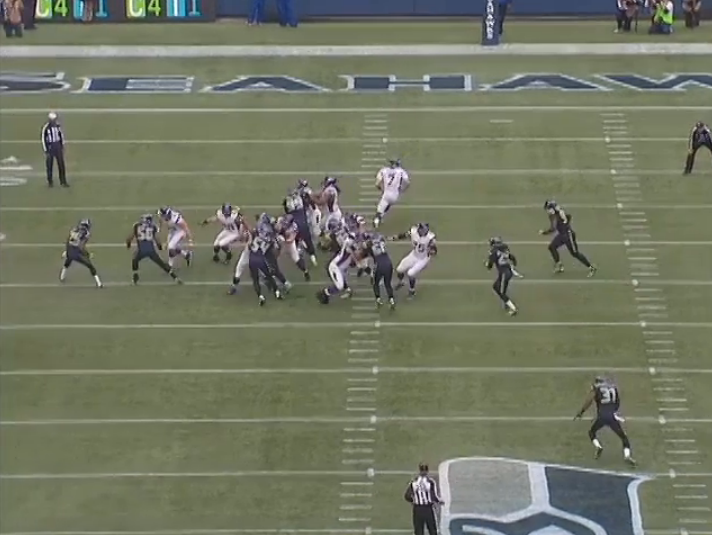 Peterson cuts to the right, now slightly off-script from the play's design, and administers a stiff-arm to rebuff the 6'6, 325 defensive tackle. As his opponent's counterpart, Marshawn Lynch, might say, "that's just a lil' baby stiffarm." 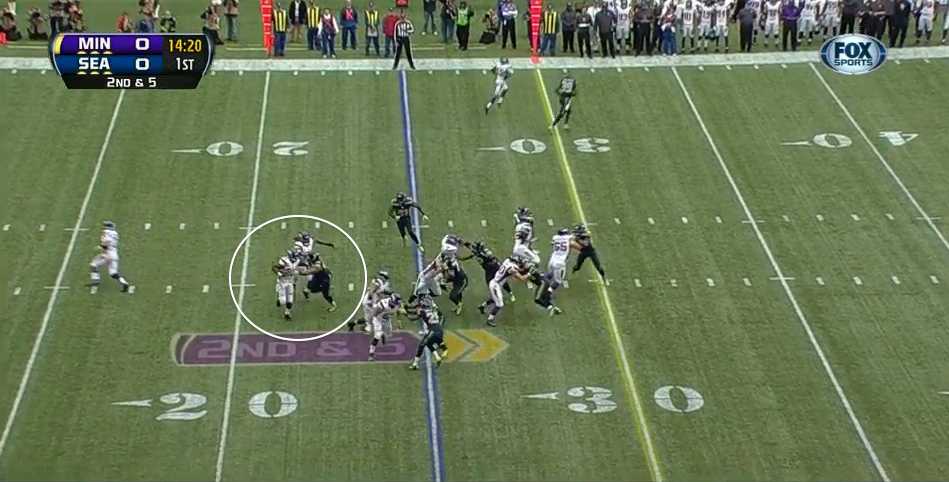 Now, again, against a nine-man front, beating one player at the point of attack isn't necessarily going to get you far. OLB Leroy Hill and CB Richard Sherman, both excellent defenders in run support, still have decent angles on the Vikings' running back. 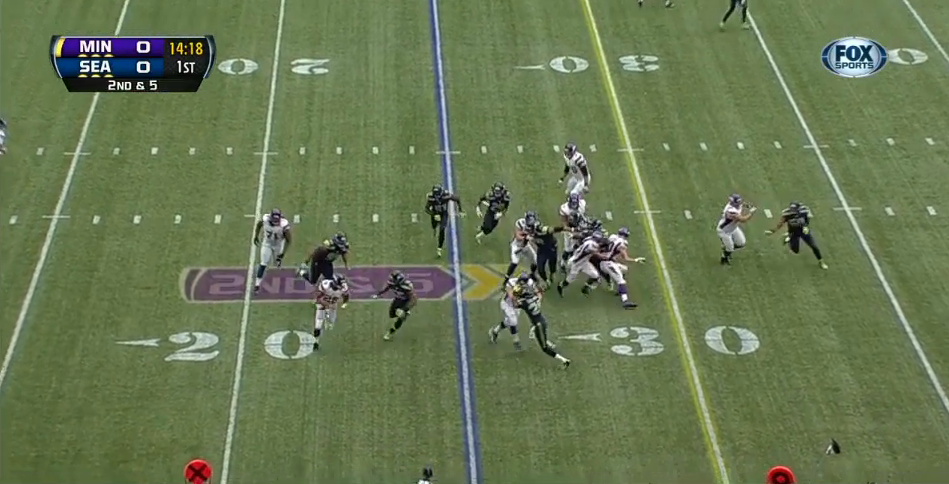 Peterson stiff-arms Hill and turns the corner past Sherman, who loses contain on the sideline, something, believe me, you rarely see from the second year pro. 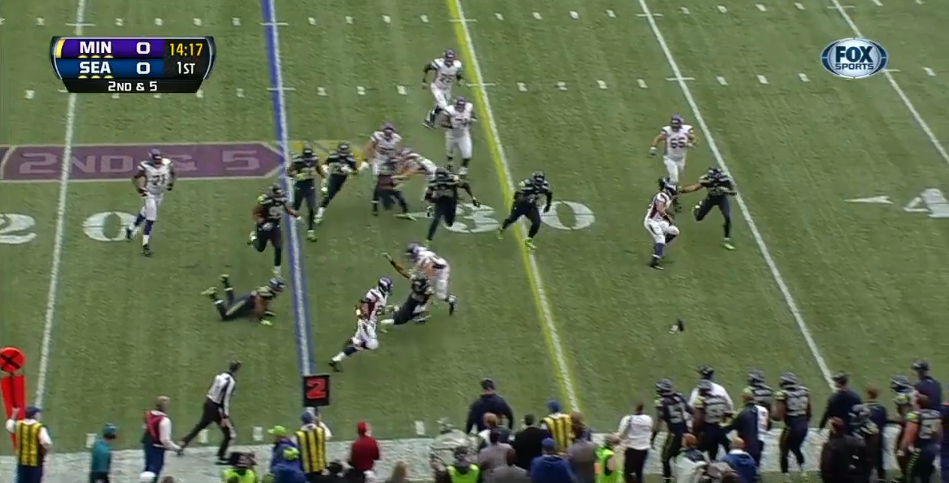 Peterson is now into the second level of the defense, but the Seahawks, always concentrating on taking away the "explosive play," have him bottled up. Brandon Mebane and K.J. Wright have a good angle on AP, and Kam Chancellor, a Pro Bowl safety in 2011, has clean-up duty should he sneak past.

Peterson puts his foot in the ground and Mebane/Wright whiff. Kam, thinking he needed to heed the sideline, now has taken a poor angle of pursuit. 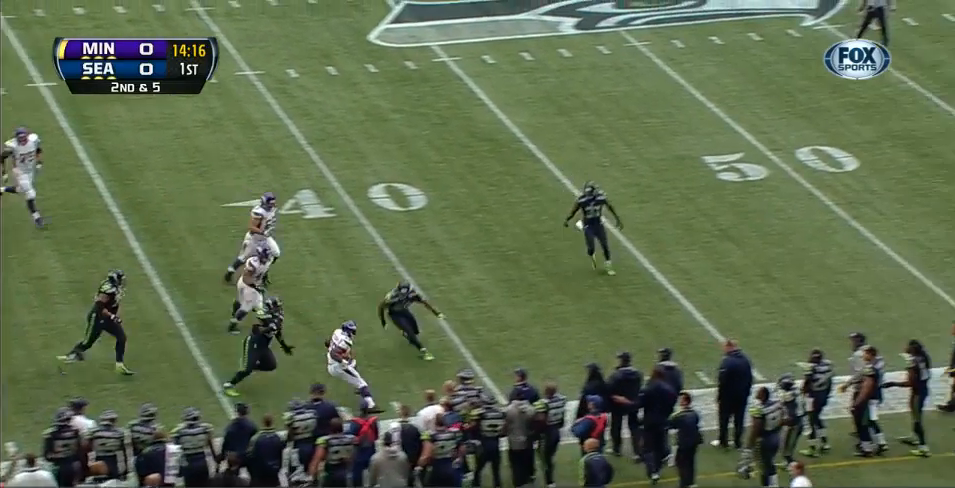 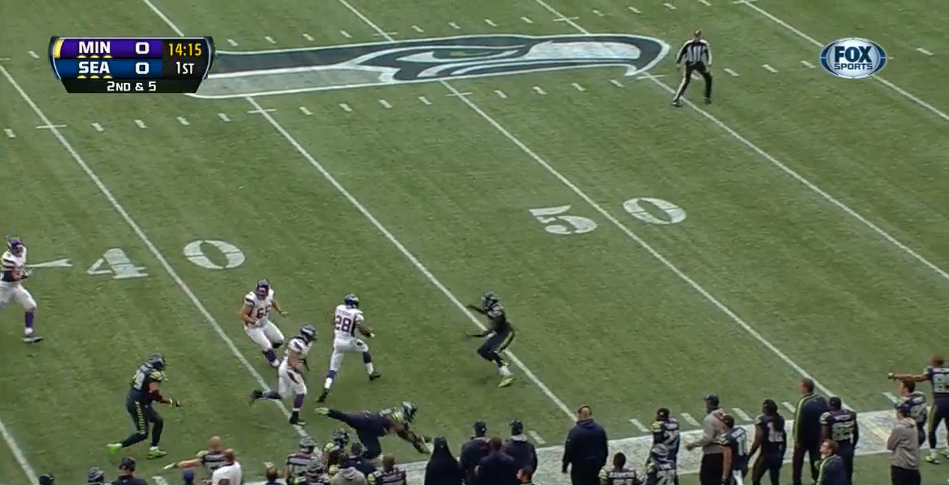 Peterson is gone. Brandon Browner, the backside corner, manages to sneak up on Peterson and Harvin, now lead blocking on the play, and make the tackle at the 1-yard line. Peterson got himself the extra yard and the touchdown two plays later.

Now, as a Seahawks fan and writer, I haven't had the opportunity to watch every Vikings game, so like many fans, I'm only getting bits and pieces of the greatness that is Adrian Peterson, through highlights and NFL Game Replay. That's a shame, because he is just that -- great. He's separated himself from the pack as the elite of the elite at running back, and for those of us that regret never getting to see Jim Brown, Barry Sanders, or Eric Dickerson live or even better, in person, Peterson affords us the opportunity to witness something akin to their talent.

I don't know if this play above was Peterson's "best" regular season run, because I didn't watch every one of his snaps, but I do feel like this play in particular is a pretty great microcosm for how AP was able to rush for 484 more yards than the next closest player at his position this seaosn.

He runs with power, balance, great vision, great anticipation, unmatched explosiveness; he's got the speed to get to the sideline to run upfield and the agility/change-of-direction to avoid tackles and "break some ankles" of defenders. I've seen him literally bowl over linebackers with 30 or 40 pounds on him, and I've seen him juke-spin to avoid the tackle of Earl Thomas, one of the fastest and most agile players in the NFL.

The run-game foundational player that I've had the opportunity to cover closely -- Marshawn Lynch -- describes his style as "Beastmode" and it seems acutely apt every time you see him run in his waddling, bow-legged-wide-stepping, contact-seeking & berserker-modeled manner. Peterson, in the same vein, describes his running style as "vicious," and I can't think of a better word to describe it.