Searching for the most asinine Hall of Fame argument

In which we present a proposal for a reality show that was never to be.

Share All sharing options for: Searching for the most asinine Hall of Fame argument

I came up with a proposal for a reality show on MLB Network called "The Search for the Most Asinine Hall of Fame Argument." I conceived a couple of different formats. It would either involve two people in chairs yelling at each other for a half-hour (something we haven't seen on TV yet), or it might be a camera trained on a guy looking up stats on a computer for an hour. One thing I know for sure is there would be elimination battles, backstabbing, and general skullduggery. The winner would get a round of golf with Jack Morris.

The problem, though, is there would be an obvious winner. There wouldn't be any suspense -- think something like "Albert Pujols, Cade McNown, and Dave Mustaine star in 'Who Can Hit a Baseball Farther?', coming to TLC this fall!" People would tune out after the first three weeks, so I junked the idea. So much hard work, ruined.

There would be a little suspense in the first episode, as everyone is introduced. You'd get to see the glazed looks in the eyes of the Jack Morris voters … but don't get used to them, because some of those voters would go home that episode. While I'm not wild about the idea of Morris as a candidate, I can at least accept the idea that if 75 percent of the electorate saw something that I didn't, maybe there's something I'm missing. Three-fourths is a heckuva majority, and some of those people are using stats as a part of their argument. The wrong stats, sure, but they're using at least some quantifiable stuff.

Also gone on the first episode: the people who are refusing to vote for anyone with a verifiable link to performance-enhancing drugs. I disagree with them, but it's a position that's at least worthy of debate. Scratching Bonds, Clemens, Sosa, McGwire, and Palmeiro off a ballot -- and committing to doing the same with Manny Ramirez and Alex Rodriguez when they come up -- is consistent, at least. I mean, say what you will about the tenets of PED hysteria, dude, but at least it's an ethos.

Making it to the second episode would be people who don't vote for players on the first ballot. That's just weird, y'all. But it wouldn't be asinine enough to advance deep into the contest.

A dark-horse contender would be the "feels" crowd. Some of the Morris crowd would sneak through to this point. They're the kind of folks who would use arguments with a lot of italics. Because you just know when a guy is a Hall of Famer because you can just feel it, and when a guy like Curt Schilling just doesn't have that je ne sais plaque, it's impossible to vote for him. But the feels crowd wouldn't stand a chance in the long run.

An interesting case would be the ballot of T.J. Quinn at ESPN, who has a novel approach of refusing to vote at all. I still can't decide if that's a brilliant way to go about it or a "most asinine" contender. Still conflicted. It's a consistent argument, which is an improvement over most of the PED-based voting, but I believe it was A. Bartlett Giamatti who said, "If you choose not to decide, you still have made a choice," possibly before firing off a sweet bass lick. It's an unsustainable position.

But they would all be crushed -- crushed -- by the eventual winner. The first finalist would be the argument that the whole era is tainted, so no one gets in. No Barry Bonds, no Mike Piazza, no Kenny Lofton, no Larry Walker. Just erase the whole decade or so from the museum, with the exception of some tasteful displays exhibiting our game's great shame.

But even that argument would be crushed by the second finalist. The winner would be the just-look-at-him argument, presented here in its entirety:

This argument is often invoked about Jeff Bagwell and Piazza. Here is an example expressed with the magic of the one-sentence paragraph.

The one-sentence paragraph always convinces me.

Because I study each sentence a little bit more.

Anyway, here is that argument.

Let me blockquote the salient passage:

Where things get tough is with guys like Jeff Bagwell and Mike Piazza. Both men are on the ballot, Piazza for the first time. Both possess Hall numbers. But were they dirty? I didn't vote for either of them. Rumors about Bagwell and Piazza, suspicions, are enough to hesitate, at least for the moment.

My 2013 Hall of Fame ballot has checks next to the names Craig Biggio, Tim Raines, Lee Smith, Alan Trammell and Larry Walker. That's all.

I don't want to get too irate about a ballot that has Raines and Trammell on it, mind you, but it's the first name that gets me. Craig Biggio. 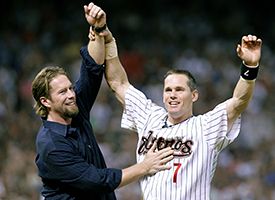 Is it somewhat disingenuous to use a single picture? Of course it is. Everyone knows that wide collar makes your shoulders look smaller. But the whole argument is dishonest. It's sifting through the muscly guys to decide the appropriate level of muscly. It will come up with different players over the next decade or two. Ken Griffey, Jr.? Nah, he's clean. Just look at him. Frank Thomas? He was always a big dude, so he's totally clean.

And this isn't to suggest that Biggio used. Not at all. This is to note that it's silly to not apply the just-look-at-him standard to everyone. Because when we think of players busted for PEDs, we know they range from the skinny (Manny Alexander) to the not-skinny (Bartolo Colon) and all points between.

The just-look-at-him argument is asinine. No, wait. It's the most asinine. Keep the guys in the Mitchell Report out, but consider the guys who have never been officially linked. Or keep everyone out. Or consider everyone. Whatever. Debates like that are a part of what makes the Hall of Fame fun.

But don't google "Greg Maddux shirtless" and consider that research. Don't look at a baseball card from 1989 and compare it to one from 1999. Don't consider who gets the just-look-at-him treatment and who doesn't. Because if you do, you're making the most asinine Hall of Fame argument. And, folks, that should be some stiff, stiff competition, but it really isn't.

Crowded 2013 Hall Of Fame ballot produces no Hall of Famers