The Maloofs have sold the Sacramento Kings to Seattle buyers. Tom Ziller has thoughts on this.

Share All sharing options for: An open letter to the Maloofs upon the sale of the Sacramento Kings to Seattle

Since open letters have now apparently become my thing ...

How do you sleep at night?

I know the stock retort from the rich and heartless is "on a big pile of money," but HAHAHAHAHAHA c'mon guys, let's try to be serious for a minute. You don't have any money. You're broke, and pillows made of dimes and nickels just aren't comfortable. That's why it's come down to this: you can't afford to keep the Sacramento Kings. You've run through all the other sources of liquid wealth, and now it's time to flip the NBA team you said you'd never sell so that y'all can pay for your various habits. You're terrible at making and keeping money. You make Antoine Walker look like Warren Buffett.

So in the end, no one's happy. Except Seattle. So uh, good for them!

I just want to highlight something from your official bios on the Kings' website.

Hard-Working, Customer Service-Driven Family Taking the Kings to the Upper Echelon of Professional Sports and Entertainment

Striving toward the goal of providing complete customer and employee satisfaction, Maloof Sports & Entertainment works under the vision statement of "a championship caliber team of people committed to the highest level of performance, service, quality, innovation, community involvement, and winning relationships."

"Our family lives by two Maloof business philosophies: Cater to our customers and take care of our employees," states Joe Maloof. "We have a long-term commitment to our fans and employees that makes the entire Sacramento community proud to call this organization their own."

Wait ... for real? We're really going to keep that up there? Is there one honest, sincere sentiment in that entire script of jargon vomit? Are y'all ever real for like even one second?

This is not rare, to hear you touting your focus on customers. When I talked to Gavin back in June 2011, after the NBA smacked your asses down on the Anaheim plan, he told me a story about how your father, George Sr., taught you all about how the customer is first. How he'd make a liquor delivery to a store at midnight if needed. How y'all would make sure every fan in the Rockets' arena was being served promptly. How y'all whipped the Sacramento customer service staff into shape every time they slacked. "Customer service-driven family." Huh.

You've slapped these customers, fans of the Sacramento Kings, in the face time after time, and you're trying to finish us off right now. Serve the customers? Bruh, you're eliminating the f--king customers. We've dealt with a horrible arena you've let fall into disrepair. (How long does it take to get someone out to fix a urinal? Really can't afford to drop a couple of bills on a plumber, huh?) We've dealt with a destitute team you've watched become an embarrassment with a general manager you're too lazy to replace and a team you're too broke to improve. We dutifully buy season tickets every summer when NEW HOPE is promised; Sacramento businesses dutifully sign up for sponsorship deals after 25-win seasons and with relocation on our minds; we dutifully stare blankfaced at as many 15-point losses as wins during the season.

Full coverage of Kings to Seattle

But still not content in your utter destruction of the value of our dollars with your horrible product, you're now going to do away with the product entirely. You're going to take our team from us.

This wasn't part of the deal, guys. Pretending to be like us, invested like us, fans like us, proud of Sacramento like us. And then selling us out? F--k that. And now you won't even show up at the gym to see what Sacramento Kings fandom has become. No one's going to do s--t but tell you how we feel. But you don't have the stomach to hear it, do you? You were right there in the front f--king row for the good times. For the celebrations. For the ecstasy. But you're not around now, are you? For the pain, for the pleas, for the disbelieving despair. They call people like that cowards. People like you.

You've always claimed you take care of your employees. Yet there are a thousand people wearing Maloof Sports and Entertainment shirts out at the arena every game night that want to stick you with something sharp. But they keep showing up and working hard (a foreign concept to you, I know), because their kids need to eat. All through the Anaheim faceplant, you weren't straight with those employees. You kept them in the dark about their f--king livelihoods. They went into the last game of the 2010-11 season having no damn clue if they'd work there again. Same thing now: you won't consider them one bit. The people that have been working at the gym since the '80s are still plugging away knowing full well that you plan to cut them off in April, if all goes according to plan. And you won't even keep them in the loop and explain yourselves. You won't face them and be remotely straight with them. You won't communicate, even now when you have a f--king deposit. They call people like that cowards. People like you.

I hope you're proud. You're on your way out of the NBA, and the epilogue of your ownership of the Sacramento Kings will read:

Congratulations. You did it! 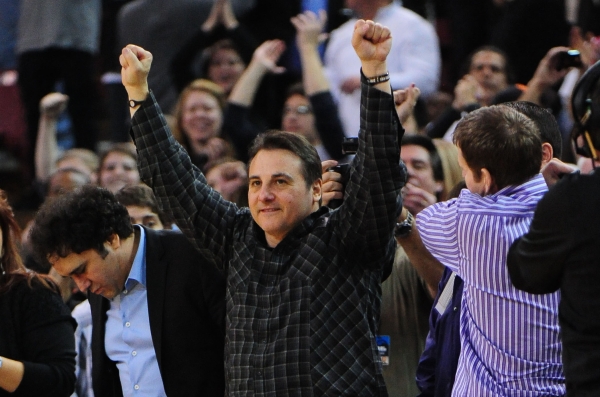 You must be so proud of yourselves.

You worked so hard to get back into the NBA after your aunts made you sell the Rockets in 1982. And this is what you did with that opportunity: made the name "Maloof" synonymous with "failure." Is that what you had in mind? Is that what you'd hoped Sacramentans would remember you for when you came to town in 1998? You thought you'd get a statue, I bet. You'd be lauded as heroes and given a statue. I've got an idea for a statue that would perfectly encapsulate what you mean to Sacramento. We'll take that broken urinal from the arena and cast it in bronze. We can set up at one of the landfills and rename the place Maloof Plaza. Hope you can make the dedication!

I'm glad you got a $30 million non-refundable deposit from Chris Hansen. We wouldn't want to see you flying coach between Seattle and Vegas (where you lost all but 2 percent of The Palms, a hotel and casino you built and ruined within the span of a decade, which is actually pretty damn impressive, even by your Maloofian standards). I'm also glad to know that now you'll be able to afford a nice going-away gift for your employHAHAHAHA sorry just a small joke to lighten the mood.

The worst part is, you abominable cowards, is that you've held Sacramento hostage for the past seven years. Y'all are fond as hell of expressing exasperation at all the years you've been trying to get an arena in Sacramento. You always find a way to neglect to mention that YOU YOURSELVES HAVE KILLED EVERY VIABLE ARENA PLAN. You went to the voters once (2006), and managed to yank support for the ballot measures two weeks before election day because of a dispute over a f--king PARKING GARAGE. You killed the NBA's arena plan that you initially agreed to because you didn't want to sign a 30-year lease for a gym that it'd take Sacramento 30 years to pay for, and because you didn't want to put up collateral on an existing $70 million loan from the city. Basically, you killed a deal negotiated on your behalf by DAVID STERN HIMSELF because you wanted an option to steal $70 million from Sacramento and move the Kings at your pleasure. That was a master stroke of Maloofian behavior, really.

Even a year ago, after you killed that deal, you not-so-quietly threatened the league with anti-trust action as it related to relocation. Man, weren't we stupid to believe that you'd consider leaving Sacramento! And when the mayor began investigating whether the city could build an arena without your participation, your hired assassins leaked a clause in the current loan agreement that said that if the city built a facility that "competed with" Sleep Train Arena, the Maloofs' $70 million loan would be forgiven.

And after years and years of steadfastly refusing to entertain any suggestion that the Kings were for sale, after years of ignoring local offers -- including one from a billionaire named Ron Burkle in 2011, who said he'd be happy to buy the team and take the city up on the arena deal y'all killed -- you've now sold the team to Seattle dudes without letting Sacramento make a competitive offer. It's like you weren't content to leave Sacramento without a team -- you wanted to kill all possibility of your customers ending up happy. Take notes, Darth Vader.

So basically, not content only to take our team, our money and our hearts with you out the door, you have actively prevented us from working to fix our downtown and guarantee our pro sports future. You have held Sacramento hostage. And for what ... a cash-out you'll blow in a matter of months, if history is any indication? Congratulations. Well done. Idiots.

I'd like to propose a toast. Here's to the Maloofs, the personification of disloyalty, artificiality and complete failure. <clink>

To Hades, with all sincerity,
Th. Ziller