Kevin Durant's playmaking has evolved over the years. Tuesday, he showed off that evolution -- plus some hot shooting -- in a measuring-stick win over the Los Angeles Clippers.

This wasn't a true measuring-stick game, because the Clippers were missing their best player. Nevertheless, the Thunder have been playing like the best team in the NBA for a while, and this win only supports that position. The Clippers raced off to a fast start, but as soon as Oklahoma City settled down, this one was over.

Kevin Durant, in particular, was so impressive. It's amazing to think that he's still adding things to his game, but this one showed off his multi-year evolution into an elite playmaker. Durant began his career mostly as a catch-and-shoot player, but he's gradually improved his ball-handling and court vision. In this game, the Clippers had no answer for defending Durant in pick-and-roll situations, which is amazing when you consider where Durant was a couple years ago.

Here are two plays that demonstrate Durant's vision. On this first one, he purposely drives left when he has Blake Griffin on him on a switch, knowing that a defender is going to cheat off Thabo Sefolosha and open him up for the corner three. 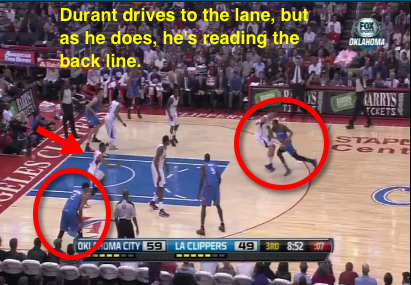 Durant knows it's only a matter of time before Willie Green helps. Therefore, he simultaneously wards off Griffin's defense and waits until the perfect moment to deliver the perfect chest pass to Sefolosha in the corner. 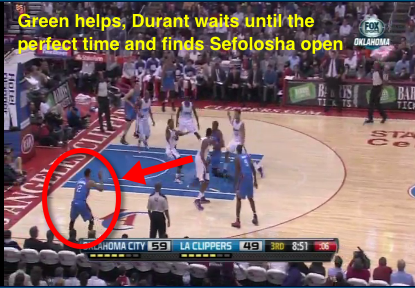 A few plays later, Durant demonstrated his ability to read all five Clipper defenders. He runs a side pick and roll, and the Clippers decide to "ice" or "down" their coverage, forcing Durant to the baseline. But Durant is crafty here. He knows the Clippers are doing this, so he makes sure to throw an inside-out dribble that freezes his primary defender (Caron Butler) and the help defender (DeAndre Jordan). That gives him this open space. 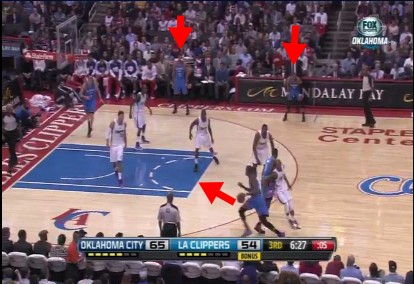 Now, it would be easy for Durant to rise up for a 16-foot jumper here, but there's a reason the two Thunder players on the opposite side have arrows. Durant knows they're there, and he also knows that the Clippers will do everything possible to prevent Durant from getting his shot off. Once again, he waits for the perfect moment when all the Clippers converge and throws a kickout pass to Sefolosha again for a wide-open three. 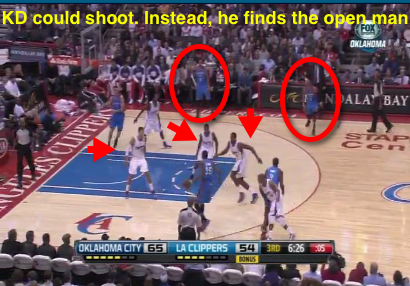 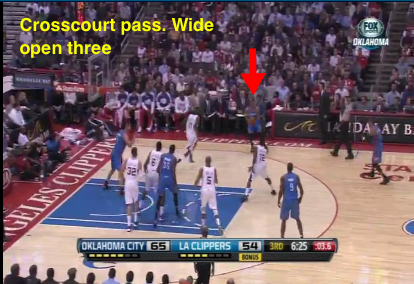 This element of Durant's game has been evolving for a little while, and it makes him truly unstoppable. If it weren't for the superhuman talent of LeBron James, Durant would win the next five MVP awards. The last time two players were this far ahead of the rest of the league was when Magic Johnson and Larry Bird were in their primes. Enjoy it while you can.

The Celtics just aren't very good right now. This quote from Doc Rivers, on the heels of his angry rant following Sunday's loss to the Detroit Pistons, is telling.

"Right now, we're mentally -- we're just not there for 48 minutes," Rivers said. "Today was better than Detroit. I guess that's the positive. Offensively, the game plan early on was exactly what we did. We did it, we scored, but then we couldn't get stops. So, you know, as a coach you've just got to keep pushing."

When a five-point loss to the league's worst team is considered progress, you know you're in trouble. Boston's problems are pretty simple, really: they can't score. Rajon Rondo was supposed to take the next step as a scorer this year, but it hasn't happened. Jeff Green, Courtney Lee, Jason Terry and others were supposed to make the second unit much more dynamic; it hasn't happened. The only reliable scorer on the team is Paul Pierce, and he just can't do it as consistently as he could in the past. When push comes to shove, everything is difficult.

On the other side, hopefully this game locked up an all-star berth for Kyrie Irving. He picked apart Boston's normally-excellent defense, and while he did a lot of his damage against Rajon Rondo, he also more than held his own against ace defender Avery Bradley.

Milwaukee left the door open many times for a 76ers comeback, but Philadelphia just couldn't barge through that door. They never stopped Milwaukee consistently, and every offensive possession was difficult.

Brandon Jennings dominated Jrue Holiday head-to-head in this one. Here's hoping that the coaches don't make too much out of one game and select Holiday, the better player, for the all-star team.

There haven't been too, too many times where the Magic's frontcourt has been overwhelmed. It was overwhelmed on Tuesday night.