Share All sharing options for: Nail Yakupov goal was great, celebration was better

Nail Yakupov was getting the business from Edmonton media before he even arrived for his first game as an Oiler, and if there's any way to a) shut them up and b) collectively make the rest of North America and really, the hockey world love you, it's doing what he did right there.

Not only did Yakupov score one of the best hockey goals of the season -- the hand-eye, my God -- in perhaps the most timely spot imaginable, his goal celebration was as good as it gets. If this is Nail Yakupov on the ice as an NHL player, hockey just got a whole lot more exciting. 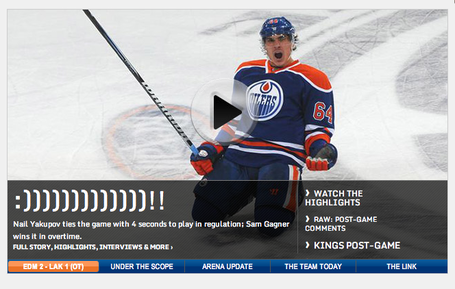 Clutch is burying a goal on a goalie you spent time trash-talking in the first period, telling him how you were going to bury one on him eventually. And you did.

Clutch is Nail Yakupov. Clutch is scoring on the defending Stanley Cup Champion Los Angeles Kings and literally taking the spotlight off of them.

And clutch is the Rexall Place light operator.

GIF via The Odd Man Rush